Problem behaviors from young children can provoke negative and reactive parenting responses, which, in turn, increases the child’s behavior problems. Parenting interventions that promote positive, authoritative parenting (characterized as reliable, dependable and nurturing) can reduce the severity and frequency of behavioral problems, decrease parental stress and reduce the risk of child maltreatment.

The pediatric primary care setting is an ideal venue to provide parent training and support. Between 25%-50% of pediatric office visits involve behavioral or emotional concerns. While some patients may require referral to a behavioral health specialist, many children may not need intensive, ongoing behavioral health treatment, especially in the early, formative years when these problem behaviors first develop. Providing a family-centered positive parenting program in the setting of the child’s primary care pediatrician could support parents and prevent future severe behavioral health problems in their children. 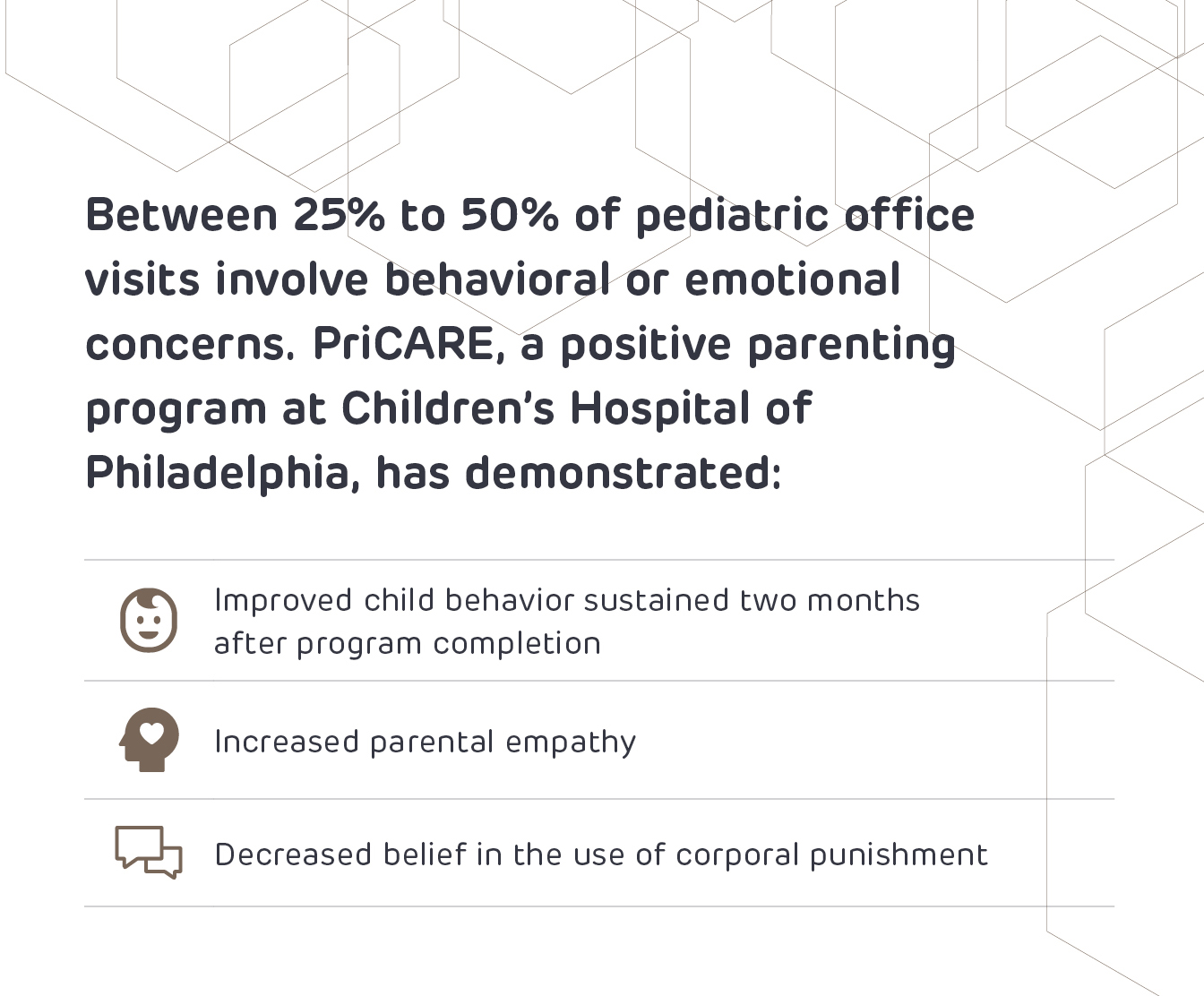 Recognizing the untapped potential of the pediatric primary care setting for addressing children’s behavioral problems, our team alongside colleagues from Safe Place: The Center for Child Protection and Health and the Department of Child and Adolescent Psychiatry and Behavioral Sciences at Children’s Hospital of Philadelphia (CHOP), modified an existing intervention called Child–Adult Relationship Enhancement (CARE) from the Mayerson Center for Safe and Healthy Children. Together, we developed PriCARE, a trauma-informed group-training program hosted in the primary care setting that teaches caregivers techniques to support the social and emotional growth of their children. As a group-training program for parents, PriCARE is designed to improve child behavior, strengthen parent-child relationships and decrease parental stress.

In the first study of its kind, our team tested the effectiveness of PriCARE through a randomized controlled trial at CHOP’s primary care facility in South Philadelphia. We enrolled 120 families and found that children whose parents participated in PriCARE had significant short-term improvements in behavioral symptoms. Additionally, after attending the PriCARE intervention, parents reported improvements in several common parenting behaviors that are felt to influence child behavior. These include decreased belief in use of corporal punishment and increased empathy toward their children. Academic Pediatrics, one of the premier medical journals, published the findings of this research trial.

Encouraged by the positive findings from the initial PriCARE evaluation, our team has now expanded the capacity of PriCARE to reach more families. Currently, we offer PriCARE to caregivers of children ages 2 to 6 at five CHOP primary care network sites (Karabots, Cobbs Creek, Main Campus, Drexel Hill and South Philadelphia). To date, more than 700 mothers, fathers, grandparents, foster parents and other caregivers of approximately 1,000 children from CHOP primary care practices have attended PriCARE.

We also developed, piloted and evaluated new technological advances—such as a text messaging platform and demonstration videos—designed to increase engagement with parents and reinforce key skills between weekly, in-person sessions. Participants reported that receiving the texts and video clips helped them remember how to practice the skills in between sessions, clarified class content and reminded them about upcoming sessions. Additionally, receiving the messages made caregivers feel supported, motivated, calm and connected to a community. One parent stated, “the texts made me feel like even when I’m not in class, the help and support was still there.”  Currently, we are implementing a fourth randomized controlled trial to determine if using this text message system enhances our prior findings on decreasing child behavior concerns and parenting stress.

Recently, we launched the PriCARE for foster parents program, as well as PriCARE (CARIÑO) for Spanish-speaking families. Dr. Samantha Schilling, a former CHOP fellow, led the effort to implement and evaluate English and Spanish PriCARE in North Carolina and Dr. Erica Messer, one of the developers of the original CARE intervention, piloted PriCARE in Cincinnati Children’s Hospital suburban primary care practices. We also began to offer PriCARE virtually, which has allowed us to continue to provide support to families during the COVID-19 pandemic. The evaluation of these new initiatives shows promise that PriCARE is effective across caregiver groups in strengthening the child-caregiver relationship and providing caregivers the skills to nurture positive child behavior.

Lastly, Clinical Futures and PolicyLab awarded our team a grant through a joint pilot grant program to implement and assess a PriCARE module focused on positive discipline techniques and appropriate timeout procedures. You can read more about that project here.

Partnering with Dr. Schilling at UNC, we received a 5-year R01 grant from the Eunice Kennedy Shriver National Institute of Child Health and Human Development to evaluate PriCARE’s impact on child maltreatment. We will be collecting reports made to Philadelphia’s Department of Human Services (DHS) as long as 52 months after enrollment in the study to determine if participants randomized to receive PriCARE have fewer reports filed with DHS compared to those who did not receive the intervention. More details about this study can be found at ClinicalTrials.Gov.

Given the lessons learned by this research team, evaluating barriers and facilitators to engagement and retention in PriCARE will continue to be important. We plan to build on PriCARE’s preliminary evidence by continuing to rigorously evaluate and improve this model.

This project page was last updated in February 2022.