With Labor Day weekend approaching, transmission of SARS-CoV-2 continues to increase in most communities, including among children and adolescents. The resurgence of COVID-19 cases is providing all-too-familiar challenges to returning students to the classroom. Still, school leaders share a common purpose this year: to preserve in-person education, while minimizing absenteeism and the disruptions that COVID-19 has caused over the last 18 months. With that in mind, we provide the September outlook from our COVID-Lab forecasting model for 812 counties across the country. We hope these data coupled with our guidance for in-person education can help school community members, including students, parents, and staff, navigate together their ever-evolving local scenarios as doors reopen and the opening bell rings.*

Here are this week’s national updates:

Some regional trends that we are watching: 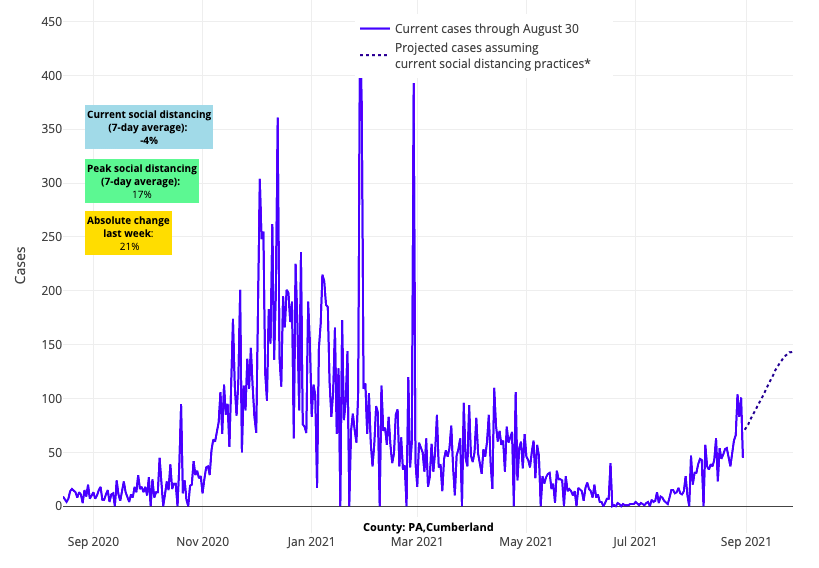 Above are the projections for Cumberland County in Pennsylvania. 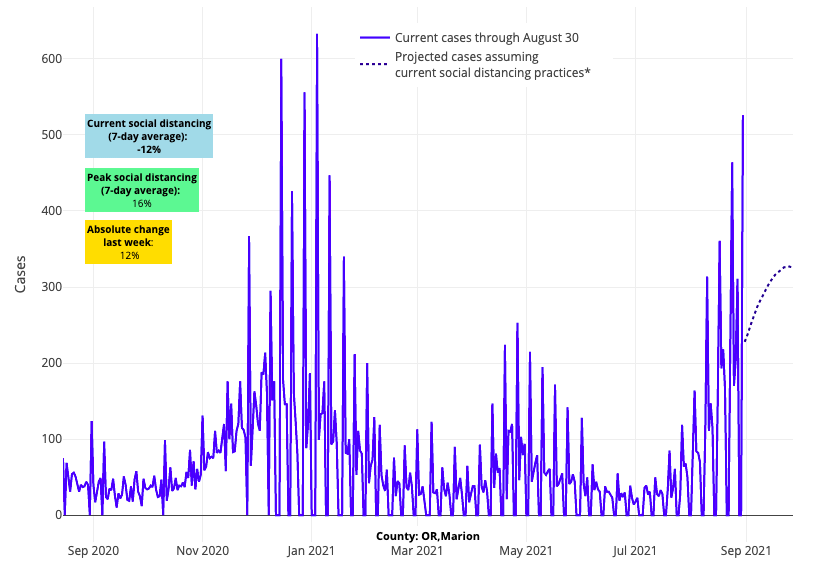 Above are the projections for Marion County in Oregon.

Concern for northern areas grows as progress slows in the south

Similar to our projections from two weeks ago, our models continue to forecast a shift in resurgent transmission from the south to the north. Hospitalizations are quickly increasing throughout northern areas, from the Upper Midwest to the Pacific Northwest and up into Alaska.

The Northeast, which has the highest vaccination rates in the country, appears resilient in our models with projected sustained, but slow, growth in case incidence throughout September. This region saw another week with fewer than 75 children hospitalized.

Also notable this week is the slow progress that the South is making. As counties across Arkansas, Florida, Louisiana, Missouri, and Texas slowly move beyond their summer peaks in case incidence, improvements in hospital census are more slowly following. With fall gatherings and school reopenings, we expect to see the current case incidence and hospitalization numbers persist throughout September in this region.

There is now increasing evidence that school reopenings—occurring at a time when children are accounting for a greater proportion of COVID-19 cases—may be delaying progress in areas that were near or moving past their summer peak in case incidence. The experience of some communities where schools have already reopened can provide a cautionary tale for others. For example, even as adult hospitalizations in Florida have slowly moved past peak over the last couple of weeks, there has been a quick rise in pediatric hospitalizations that coincided with school reopenings. Soon after children returned for classes and fall sports, daily COVID-19 hospital census increased from a plateau of 180 children in early August to a new plateau of 225 children that has persisted since the middle of the month. 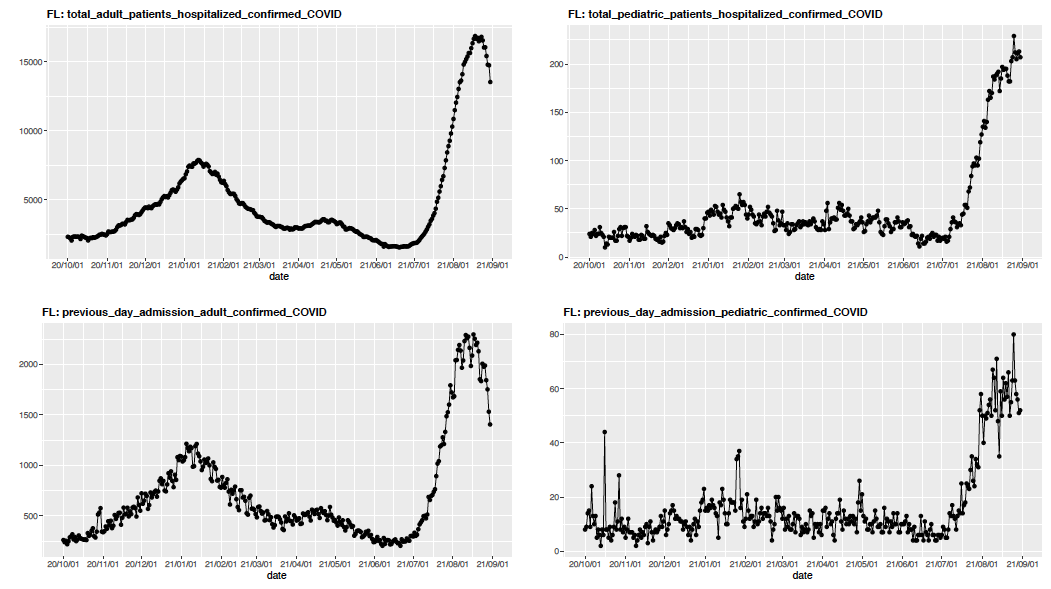 The above graph (click to enlarge) shows total adult and pediatric COVID-19 hospitalizations and previous day admissions for adults and pediatrics in Florida.

Similar jumps in pediatric hospitalizations can now be seen throughout Georgia and Tennessee. Notably, communities across these states have largely abandoned mask requirements, even as transmission surges. In contrast, California has thus far avoided a similar second bump from school reopenings, illustrating the potential benefit that masking can have when students return to school during a period of substantial transmission. California also benefits from higher community vaccination rates, particularly in its large cities. Our blog post last week illustrated the strong protective effect of adult community vaccination rates on risk for pediatric hospitalizations. 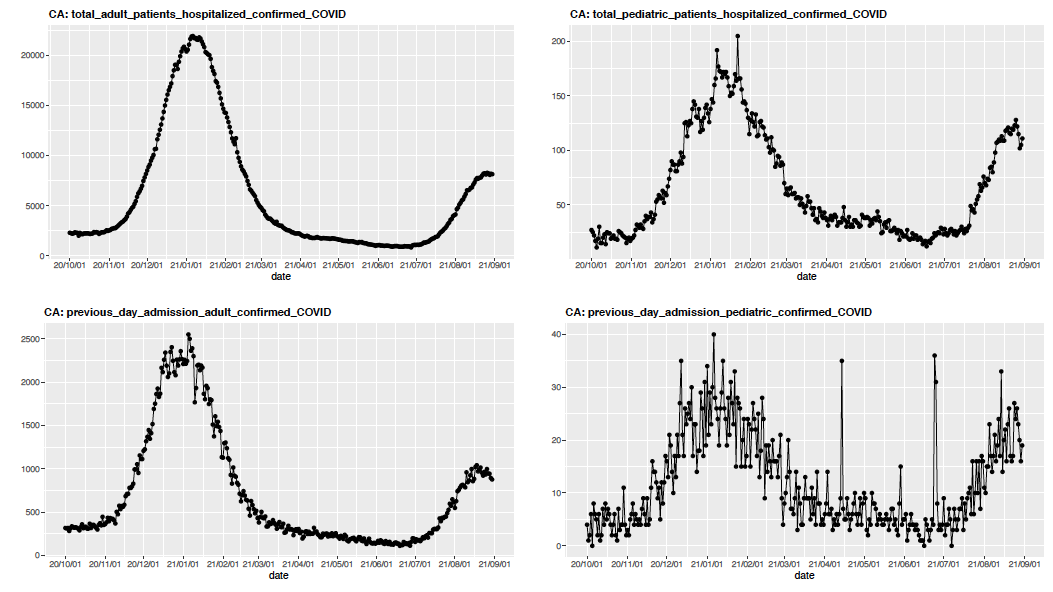 The above graph (click to enlarge) shows total adult and pediatric COVID-19 hospitalizations and previous day admissions for adults and pediatrics in California.

Pediatricians are accustomed to a rise in pediatric respiratory infections within a couple of weeks of schools reopening. As children and adolescents return to the classroom after not seeing peers for several weeks, illness quickly spreads between them. This translates into an influx in primary care office sick visits beginning in the early fall and continuing into the winter. As such, it should not be surprising that a return to school in regions with relatively high transmission rates has led to an increase in COVID-19 infection among children. However, the burden of illness resulting from SARS-CoV-2 spread among students is beyond that of the typical respiratory virus season and has the potential to overwhelm schools ill-equipped to manage the number of infections they might see soon after opening their doors.

For that reason, we believe a requirement for indoor masking at school and throughout a community makes practical sense right now. Our data reveals that nearly all counties in the U.S. are experiencing substantial community SARS-CoV-2 transmission as schools open, and more than 80% are experiencing growing transmission. The priority for all communities this year is to keep children in classrooms, and mass quarantines in the South have already proven extremely disruptive to schools. Masking alongside increased testing and growing vaccinations will help lower COVID-19 burden.

However, the implementation of any required mitigation strategy should be accompanied with an expectation that the need for that strategy be routinely revisited. As community incidence changes, school leaders should be regularly reassessing and adjusting all components of their safety protocols, including mask requirements, returning flexibility in decision-making to families where possible.

While intense debates have emerged at the county, district, and even local school level on how best to manage the year, many communities are recognizing the need to align with public health guidance/requirements. We need to accept that mitigation strategies will need to be fluid throughout the year, dictated primarily by local transmission rates. While the school year is starting out bumpier than people had hoped, schools are better equipped this year to pivot in their safety plans based on their local situations. And if we continue to increase our vaccination rates, we will reduce transmission, ultimately providing our schools more opportunity to roll back mitigation requirements.

As schools return to in-person learning, our team at PolicyLab wishes all students, teachers, and school employees a healthy, safe year. We remain optimistic that even with the challenges of September, there are brighter days ahead.

*Frequent visitors to the COVID-Lab model will note some adjustments to our projections, which now incorporate a rolling seven-day case incidence (as opposed to daily rates) to account for increased noise in the data and unreliable daily reporting in many regions. This change has improved the validation of our model over prior weeks, and our projections for reproduction numbers and case incidence for the next four weeks appear smoother than in previous forecasts. We’ve also decided not to include projections for counties across Nebraska, as concerns about reliability of data have arisen over the summer.