COVID-19 Outlook: Resurgence is on the Move as Schools Reopen

After pausing our weekly forecasts in May, the COVID-Lab modeling team returns this week with new four-week county-level COVID-19 case incidence projections for the 821 counties we have been tracking since last year. These projections cover a time period, including Labor Day, in which most students throughout the country will be back in school buildings and on college campuses.

Here are the updated current and projected national COVID-19 data: 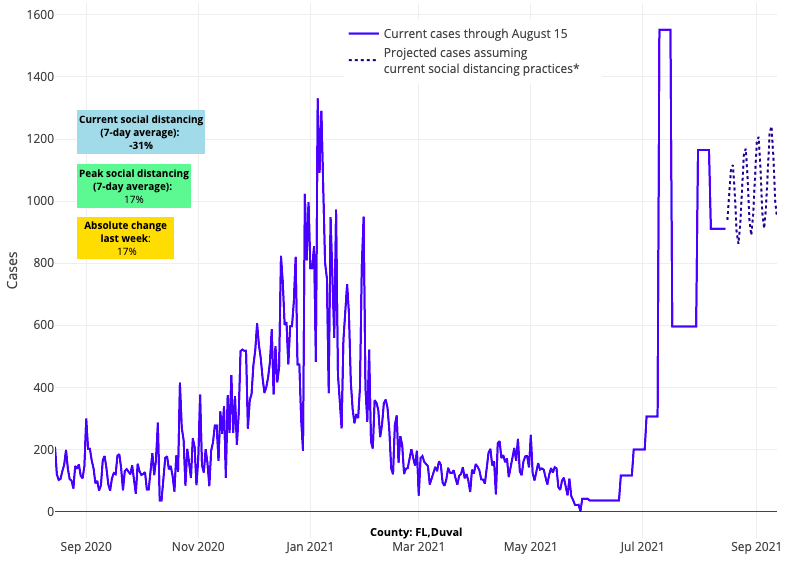 Above are the projections for Duval County (Jacksonville) in Florida.

Fortunately, there is some evidence that the summer surge is beginning to abate:

As we have noted from the onset of our modeling project, it is necessary to monitor incidence and transmission locally as the experience with this pandemic can vary dramatically from one county to the next at any given time. The following are location-specific assessments: 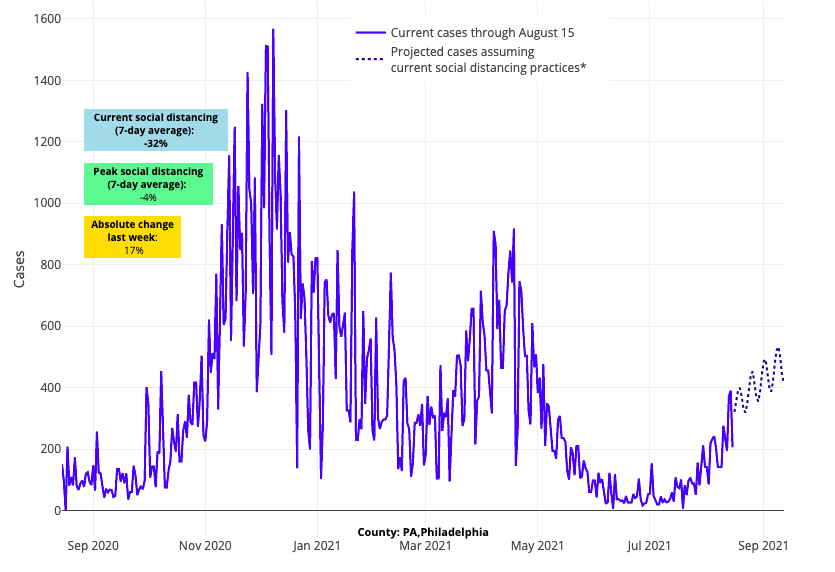 Above are the projections for Philadelphia County in Pennsylvania.

As Case Incidence Peaks in the South and West, Northern Areas Heat Up

This summer’s COVID-19 resurgence across the South that has filled hospitals in Florida and Texas has captured the nation’s attention as schools resume there. These two states alone currently account for 40% of all hospitalized adults in the country and, similarly, nearly 40% of all hospitalized children (250 and 200 children in Texas and Florida, respectively). The majority of all ICU beds in many southern states are now occupied by COVID-19 patients, creating access challenges for patients with and without SARS-CoV-2.

Widespread community transmission is now blanketing most of the rest of the country. Large summer gatherings, where vaccinated and unvaccinated individuals are mixing, are likely the foundation for this phase of the pandemic. Additionally, other familiar patterns are re-emerging. Similar to last August, while the southern-most parts of the country appear to be reaching peak rates of transmission, we are now seeing worrisome transmission rates in the Upper Midwest, particularly in Minnesota and Wisconsin, and substantial case incidence is being recorded in the Southeast, including counties throughout Georgia, Tennessee, North Carolina and Kentucky. Only the Northeast, buttressed by higher overall vaccination rates, has experienced more modest increases in transmission rates and hospitalizations thus far this summer. 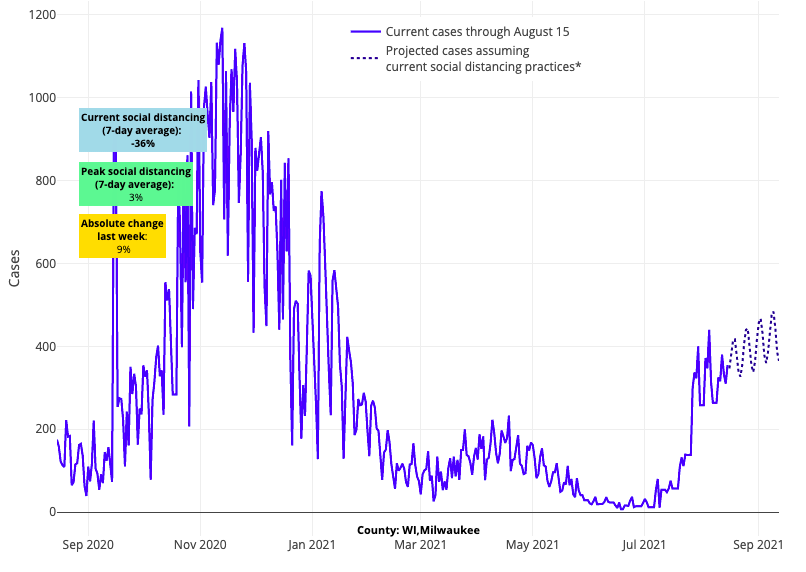 Above are the projections for Milwaukee County in Wisconsin.

This “shift northward” pattern resembles prior phases of the pandemic and warns us that unless we maximize vaccine coverage, northern parts of the country are at substantial risk as we move toward fall. The small state of Vermont, where nearly 80% of eligible adults are now fully vaccinated, is a bellwether for how protective high vaccination rates might be this winter. As of this week, Vermont hospitals had a census of 0 children and 20 adults. Massachusetts, a much more densely populated state, has achieved similar vaccination rates, and this week only reported a census of 350 adults and 5 children hospitalized. In fact, throughout the Northeast, with its high adult vaccination rates, daily hospital census of children with COVID-19 infection has only reached 50-60 and some of them may have been hospitalized for reasons unrelated to COVID-19.

The seasonality of COVID-19, as well as other viral transmission, is poorly understood but likely involves differences in latitude, temperature and humidity. As days shorten and daily temperatures fall, we spend more time inside, thereby increasing transmission risk. Additionally, cold, dry weather may promote a higher risk of respiratory virus transmission because respiratory droplets can desiccate more rapidly in these conditions and travel slightly further distances. Throughout the pandemic, COVID-19 transmission in colder weather has been more than double what we have witnessed during the summer. The lowest transmission rates occur in late spring and early fall with more moderate temperatures and longer days. For a fuller discussion on the impacts of seasonality, see our JAMA Network Open study from earlier in the pandemic, the findings of which have held up to present day.

Projecting forward, the risk of a fall resurgence is nearly certain in northern areas, although the magnitude of that resurgence and timing of peak transmission are still unknown. It is possible that, in contrast to last year when transmission abated in much of the country in early fall, this year may see continued and growing transmission in many areas leading to an earlier fall peak. Counties from Indiana eastward to the New Jersey/New York City metro area are still demonstrating continued growth in our forecasts, such that their peaks in transmission may occur near Labor Day. It is quite possible that the resumption of large sporting and entertainment events and reopening of schools may aggravate the resurgence in these locations as we move through September. 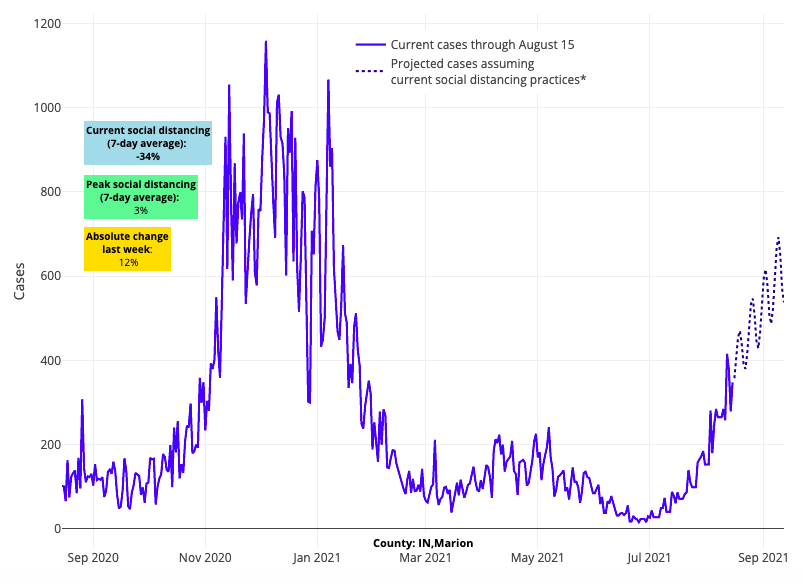 Above are the projections for Marion County (Indianapolis) in Indiana.

However, it is also possible that we may see some improvements in overall transmission in early fall as families return home from vacations to resume more regular routines. Our models are detecting evidence of slowing transmission rates in many areas of the country, even if such declines may not be enough to move some of the northern areas beyond their peaks by Labor Day. From Los Angeles to New York City, many individuals have likely recalibrated their behavior in response to concerns about the current resurgence and risk to their families.

A Challenging Start to the School Year

The timing of the current resurgence is of course not ideal for schools as they reopen throughout the country. Higher community transmission increases the challenges school communities face as children enter their classrooms, some for the first time in almost 18 months.

While many parents continue to assess the merits of school-based policies around masking, all should be aware that requirements for isolation and quarantine of infected and exposed individuals are likely to be the greatest threat to maintaining in-person education, particularly in elementary schools where children have not yet been offered vaccination. For that reason, most districts in which substantial transmission is occurring have already decided to resume school with indoor masking, so as to reduce student and staff absenteeism as much as possible and to protect children from the low, but appreciable, risk of severe disease. In addition, many schools, if properly equipped with testing resources, may also resume some weekly assurance testing at the onset of school to help get the school year off to a good start.

Time-limited indoor masking requirements in areas with surging transmission are likely to become the most important tool to minimizing school absenteeism and functional school closures early in the year. As transmission subsides, and upon the availability of vaccines to all children, many school districts might revisit these plans, returning decisions about mitigation strategies to local communities and to parents who wish to navigate their own risk for themselves and their children. The latest Centers for Disease Control and Prevention guidance no longer recommends quarantine of students when they are exposed in fully masked settings or are vaccinated. PolicyLab has complementary school guidance that focuses on equipping families with practical advice for navigating the school year during periods when masks are optional and helping school leaders create safety plans that layer multiple prevention measures—such as testing, masking, symptom screening, ventilation and pragmatic distancing—during the day to minimize transmission and outbreaks in school settings.

Overall, our updated models demonstrate that schools will begin the year with advantages that vaccinations have conferred, but with different challenges than they had this time last year. While the risk to vulnerable family members and school staff has been alleviated through vaccinations, children—particularly those who are unvaccinated—are increasingly represented in this current resurgence. Schools will feel this pressure in many regions and should be prepared to pivot their safety plans during periods of higher transmission with the goal of keeping children in school. Despite the anxiety this summer has produced, communities are better equipped to respond to emerging challenges this fall with flexible safety plans, which should help instill confidence as we await access to vaccinations for younger children.