With another week of updated data and projections through our COVID-Lab forecasting model, here are this week’s updates: 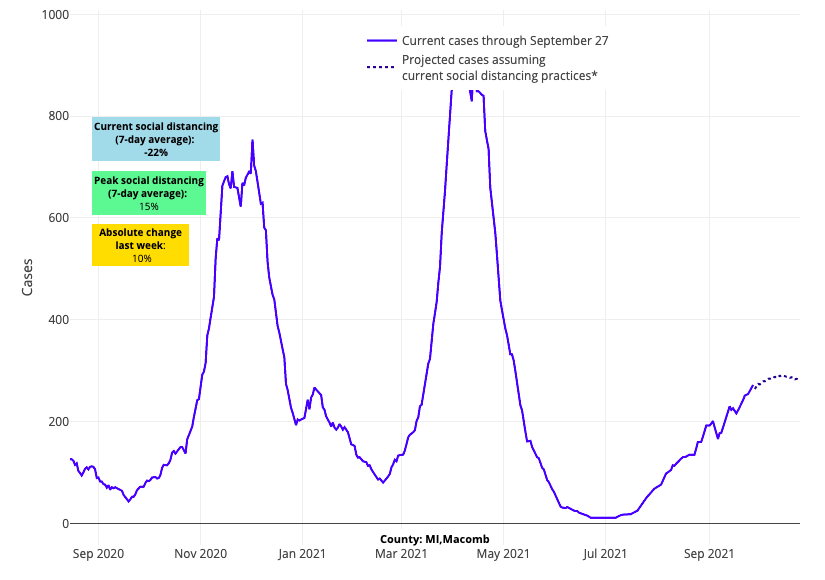 Above are the projections for Macomb County in Michigan. 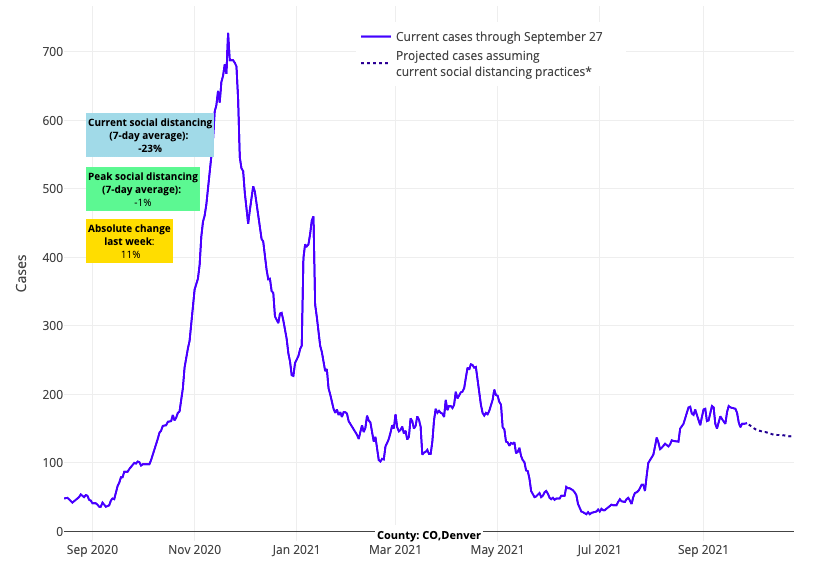 Above are the projections for Denver County in Colorado.

The increasing case incidence that much of the Upper Midwest, Mountain States, and Northeast experienced in recent weeks—in patterns similar to what we saw early last fall—led many to raise concerns that another winter resurgence was looming. However, this week’s COVID-Lab forecasts show that these regions are likely to fare much better than last year.

It should be noted that even locations with lower vaccination rates and higher hospitalization numbers late this summer into early fall are now beginning to see adult hospitalizations plateau. This would suggest that population immunity, both from infection and vaccination, is helping to blunt the frequency of adult infections that require hospitalization.

However, children remain an important potential reservoir for continued transmission of SARS-CoV-2 because they have not yet had the opportunity to be vaccinated. Children now account for more than one-quarter of all new cases in the country, a proportion that has been growing steadily over the last several months. Until children are able to be vaccinated, we continue to stress just how important adult vaccination is in protecting children. We saw evidence of this protective cocoon effect during the recent summer resurgence, and we expect this to be more evident as we move deeper into fall.

The most recent weekly report from the American Academy of Pediatrics reveals that the more highly vaccinated Northeast is experiencing less than half of the number of children’s cases that are being reported out of the Midwest, where many states have lower adult vaccination rates. That has contributed to relatively low hospitalization rates for children in this region. Optimizing adult vaccine rates now will provide a greater umbrella of protection to children in the coming weeks.

Declining transmission over such a wide geographic area is welcome news for schools across the country that grappled with widespread community transmission at the start of the school year. Even as conditions begin to improve, however, it will take some time for many locations to drop below the Centers for Disease Control and Prevention’s (CDC) substantial transmission threshold of 100 weekly cases per 100,000 residents. In this environment, schools will continue to seek practical solutions that help avert large numbers of school absences, which disrupted classrooms during prior periods of substantial transmission. This has led to a renewed debate on required quarantines of students and staff exposed to a COVID-positive individual during the school day.

For schools that require indoor masking, the CDC recommends exempting close contacts from quarantine requirements following exposure. Previous reports from the CDC had demonstrated that the secondary attack rate following exposure in school was quite low when students were masked in classrooms. Furthermore, a few weeks ago, we highlighted how an indoor masking requirement in schools during a period of substantial transmission in Kentucky helped blunt pediatric hospitalizations as schools reopened, particularly compared to neighboring Tennessee where indoor masking decisions were left to local school board. These data suggest that schools choosing to require indoor masking during periods of substantial transmission will benefit by avoiding the sheer number of children who would be required to quarantine following an unmasked exposure and potentially reduce pediatric hospitalizations.

That said, indoor masks have not fully solved the challenge of quarantines. There remain times when children have to unmask, particularly in the lunchroom. There are also many exposures that occur at unmasked events in the community. Fortunately, new evidence has emerged in recent weeks that provides schools with an additional strategy permitting exposed children to remain in school safely, so long as they are masked and remain asymptomatic.

A randomized trial in The Lancet revealed a low rate of secondary transmission among secondary schools and colleges last spring that implemented a “test-to-stay” program, which provides frequent tests to exposed students during the week in which they would have been required to quarantine. In masked school settings, overall rates of secondary attack were below 2% and even lower among those reporting no symptoms. In our own region, the implementation of Project: ACE-IT has led to more than 500,000 COVID-19 tests in schools since January. Children testing negative are able to stay in person and avoid prolonged quarantine. Under this testing approach we have identified a secondary attack rate less than 2% among asymptomatic exposed children. Importantly, those children who test negative between 5-7 days after exposure are able to end their quarantine more quickly and return to school.

With this emerging evidence, many regions are now implementing alternative approaches to quarantine for asymptomatic children. This includes many Midwestern states, as well as large urban areas in California and Massachusetts. A test-to-stay program would ask exposed asymptomatic students to mask up for school during the week after exposure (if not already required to do so per local health department or school policy) and consent to a few rapid tests during the week. As long as they remain asymptomatic with negative tests, these students can avert school absence. Families that don’t wish to participate can elect to follow current quarantine requirements. Should symptoms develop, students would be tested immediately and asked to complete the quarantine at home. We are hopeful to see more schools in our region moving to use this approach in the coming weeks.

This week we can all exhale a bit as the country appears to round a corner. But much work remains as fall gatherings will, at the very least, prolong the country’s recovery. During this stretch, communities that adopt practical, time-limited strategies to curb transmission when case numbers are high can ensure that resuming more and more activities can be done safely for our children and families. These communities can find optimism for a coming new year, when even greater flexibility will return, and when public health restrictions will hopefully continue their retreat back to the background of our lives.