COVID-19 Outlook: 4 Trends Playing Out Across the Country

This week, our COVID-Lab modeling team won’t be posting case incidence projections for the 821 counties we monitor, as we have learned from prior experiences that county-level data gathered over a holiday week can sometimes be unreliable. Instead, we have chosen to focus on some of the larger regional trends evident in the current data that reinforce many of the projections we made in late August:

1) We’re seeing declining transmission in the Northeast, Upper Midwest and Southwest. We saw a similar decline in the Northeast last year just after the peak of summer, which was likely related to more temperate weather as shown in our previous research. However, the picture in the Upper Midwest differs this year as compared to last. By early September 2020, the Upper Midwest was experiencing epidemic levels of transmission and adult hospitalizations were increasing. This time around, this region is seeing a decline in transmission, which may be the result of higher vaccination rates alongside a growing proportion of individuals with immunity due to natural infection. A nice example of this is Michigan, which despite having a lower overall vaccination rate than its neighboring states has had some of the lowest community transmission rates in the Midwest this summer, potentially because of the population immunity they gained from the significant late winter resurgence the state sustained earlier this year. Still, with case incidence approaching 200 weekly cases per 100,000 individuals throughout the region, the Upper Midwest will bear close watching as fall approaches. So too will the Southwest, which has done much better overall this summer than the Southeast, but where community transmission nevertheless has been increasing slowly over the summer. More temperate weather there may give these communities an advantage over the next few months compared to colder regions in the North. 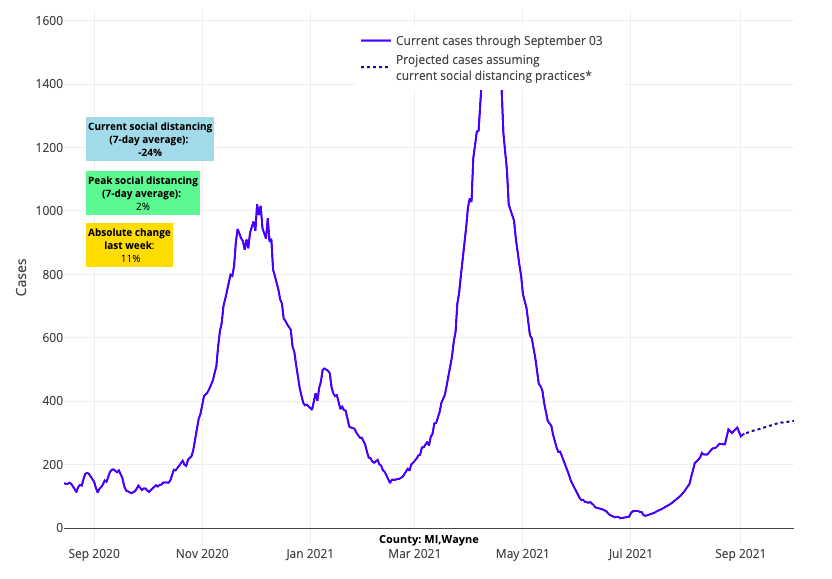 Above are the projections for Wayne County in Michigan.

2) Accelerating SARS-CoV-2 transmission is most prominent along the I-80 corridor from Indiana across Ohio and into Pennsylvania. The nation’s highest reproduction numbers (a measure of transmission that estimates how many additional individuals, on average, will be infected by every positive case) are found in this region. In Ohio, there are no signs that transmission is slowing as schools resume in-person learning. At present, many school districts outside of Columbus have “mask optional” policies, so we fear there might be significant case increases over the next few weeks. Notably, both Indiana and Ohio have some of the lowest vaccination rates in the region, and neither state experienced the magnitude of transmission and hospitalizations that Michigan had in early spring. 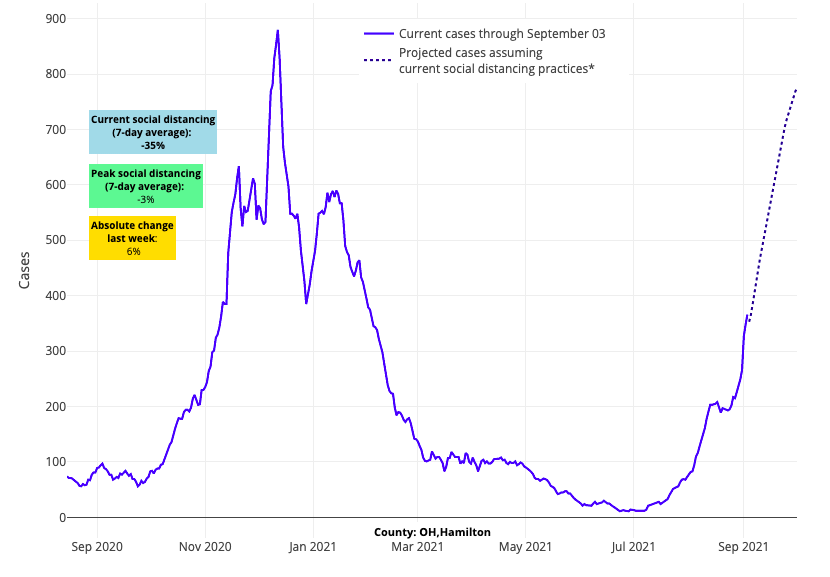 Above are the projections for Hamilton County in Ohio. 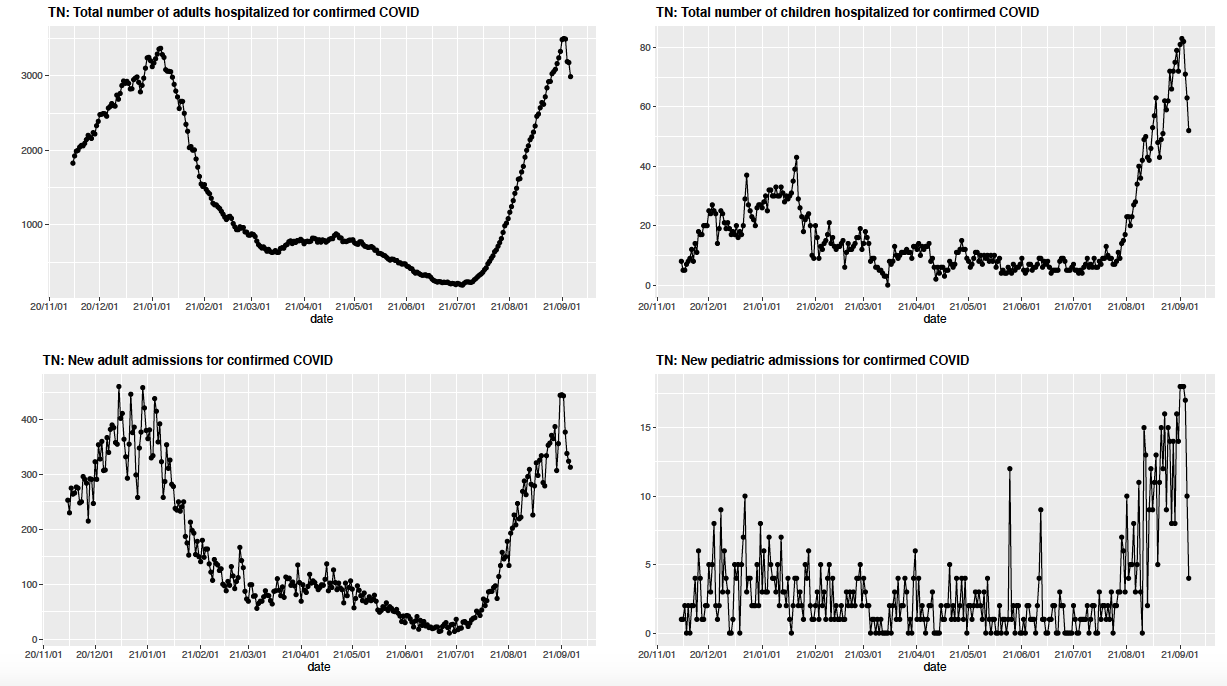 The above graph (click to enlarge) shows total adult and pediatric COVID-19 hospitalizations and previous day admissions for adults and pediatrics in Tennessee. 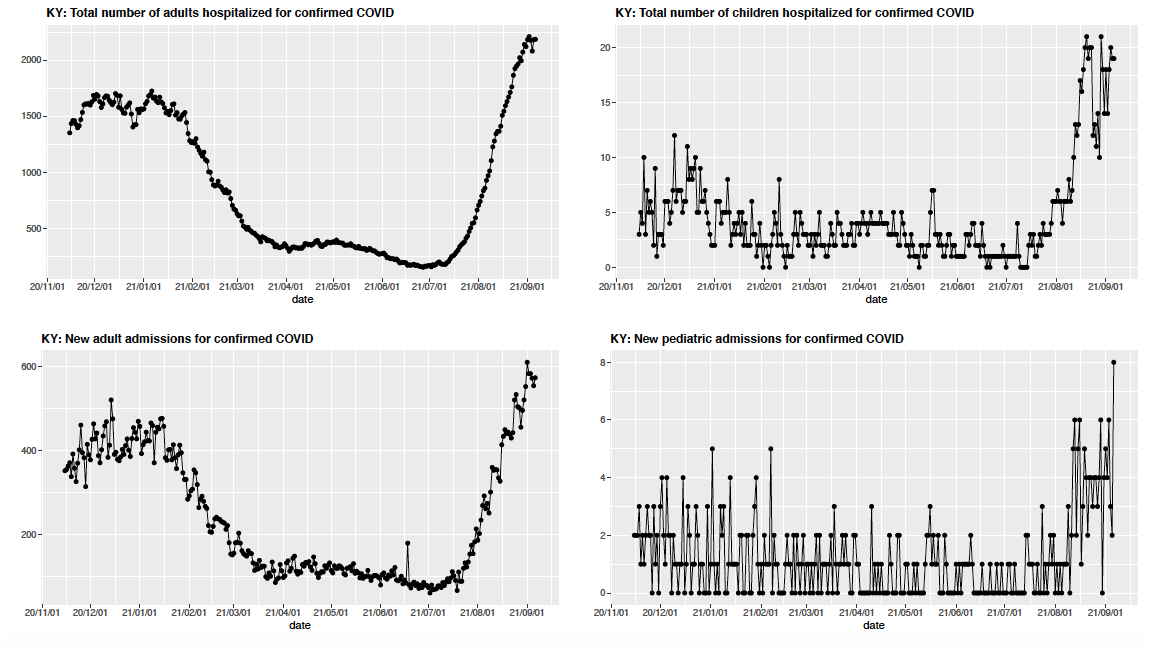 The above graph (click to enlarge) shows total adult and pediatric COVID-19 hospitalizations and previous day admissions for adults and pediatrics in Kentucky.

4) Areas still seeing peak transmission rates include parts of the Southeast and the Mid-Atlantic, as well as the Pacific Northwest. The southern zone of peak transmission is spreading northward into areas of Virginia and our nation’s capital. Fortunately, Florida, Louisiana and Mississippi, are finally seeing improvements after weeks of sustained hospital pressure, and some southern cities are proving resilient. For example, Atlanta and Savannah appear to be lagging behind other areas of Georgia. Summer resurgence in the Northwest has not yet abated, but there too we see evidence of large cities being more resilient than other areas. Peak case incidence appears more imminent in Seattle—similar to Atlanta—than in other metropolitan areas within the region.

Above are the projections for Fulton County - Atlanta (left) in Georgia and King County - Seattle (right) in Washington.

We’re likely to continue seeing resurgence in the weeks ahead, particularly as colder weather returns to the North. But we may also be surprised by new patterns of spread. Growing population immunity from vaccination combined with natural infection over the last few months may insulate some regions against the incredible number of hospitalizations we saw last November.

As Americans return from summer, lives and routines are in transition, but certain mitigation measures remain critical. With large sporting and entertainment events scheduled for this fall, and eventual holiday gatherings planned, a measured approach to safety will be essential. When disease burden is high, keep gathering sizes small and masks on in crowded indoor settings or when mixing with people who may be unvaccinated. While we await further growth in vaccine coverage amongst teens and adults this fall, and in young children later, we maintain a cautious optimism that this year will be different—and hopefully better—for many children, families and educators.

We’ll be back next week with a full set of county-level four-week case incidence projections that reflect the impacts of the first 10 days after Labor Day weekend.