COVID-19 Outlook: Mounting a Response Before It’s Too Late

It is hard not to feel like the decisions we make right now will set the course for whether and how well our country will be able to get back to work and school after Labor Day. With an epidemic that continues to accelerate throughout the country, our PolicyLab models last week revealed that only New England was not yet expected to feel the brunt of this quickly worsening situation, but that states like New York, Pennsylvania, and New Jersey could quickly be consumed by the widespread transmission occurring to their west and south. Difficult decisions are already being made: multiple colleges have moved to online learning, and Phoenix, Atlanta, Los Angeles and San Diego, some of our nation’s largest school districts, announced they won’t have students return to the classroom anytime soon.

This week, we started to see data from the July Fourth long weekend, which reveal a different pattern than we saw on Memorial Day. Instead of heavy traffic along our southern and western coastlines, this past holiday weekend, people flooded north and to the interior of the country. The New England and mid-Atlantic beach towns saw considerable traffic, as did Las Vegas, the Poconos, Catskills and, once again, Lake Michigan. Even Harrisburg, Pa., experienced increased traffic, reminding us that we need to closely watch areas with amusement parks, like Hershey Park, that can draw large crowds. Our new data visualization (see below) outlines the counties in blue that saw these significant increases in encounters over the three-day weekend compared to the week before. These will be the areas to watch closely over the next two weeks for potential surges in COVID-19 cases. 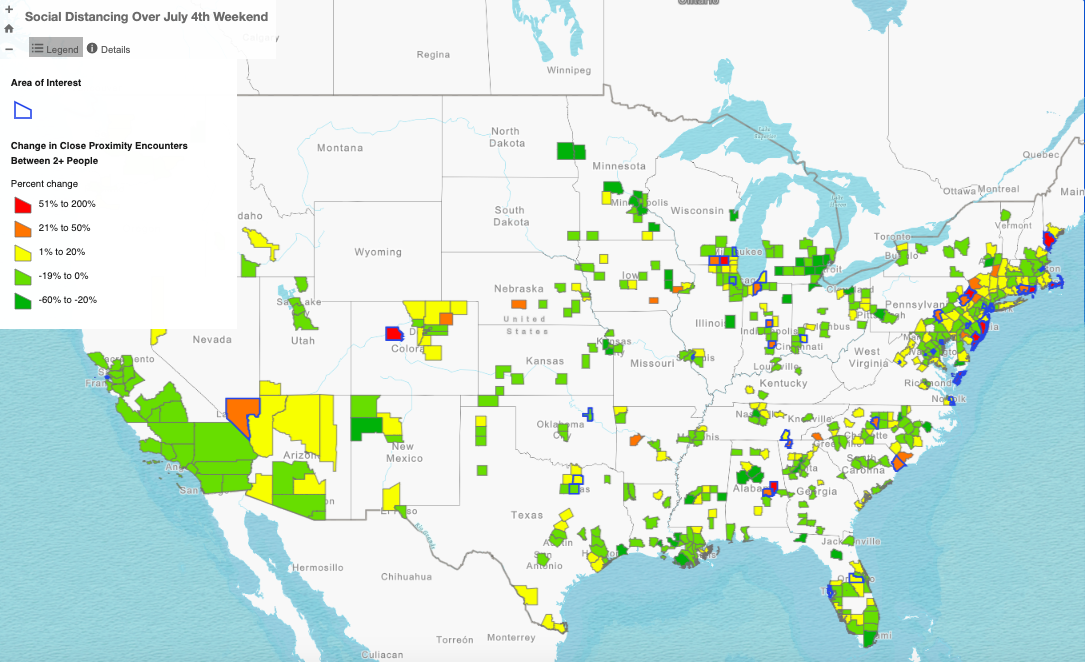 Our projections this week show many areas of the south appear to be fanning the flames of the resurgence nationwide. Florida and Texas (and the Carolinas, Tennessee, Alabama and Mississippi) have not altered their social distancing well enough to alleviate the crisis in the coming weeks. Louisiana and Georgia are becoming their own epicenters even as citizens of New Orleans and Atlanta appear to be practicing vigilance in masking and distancing; but how are they to succeed if their neighbors aren’t practicing the same standards and routines? We are also seeing new risk for virus resurgence in Denver, as well as many areas of the heartland including Wichita, Kan., and Lexington, Ky.

Above are the projections for Orange County in Florida (left) and Galveston County in Texas (right).

We were encouraged to see that the people of Arizona increased social distancing, as did many in California, particularly in San Jose and Sacramento. However, the Central Valley continues to confer risk to much of California, so we support Governor Newsom's decision to pause the reopenings across the state. Oregon and Washington are also mounting an impressive response, and we give credit to Fayetteville, home of the University of Arkansas, whose citizens seem to be distancing more in advance of their students returning to campus. Unfortunately, forecasts for many other college towns—from Tuscaloosa, Ala., to Ann Arbor, Mich., to Lincoln, Neb.—continue to worsen, creating unenviable choices in the weeks ahead for their school leadership. 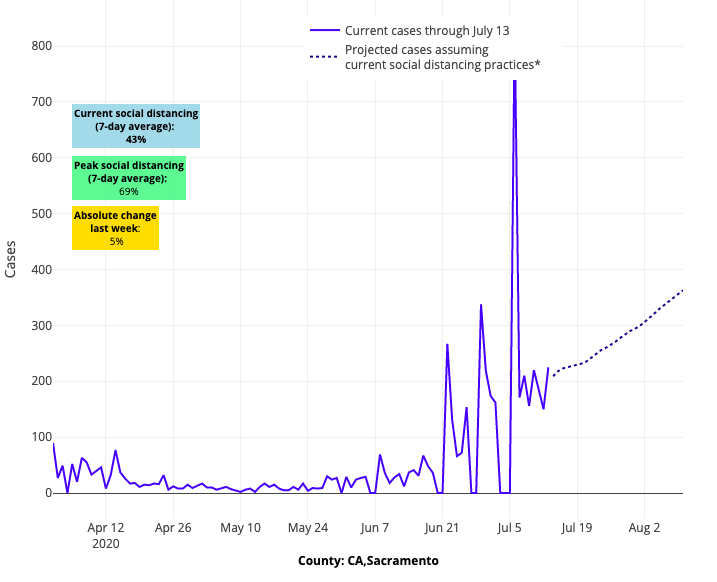 Above are the projections for Sacramento County in California.

But the biggest concerns are now in the Mid-Atlantic, Northeast and Upper Midwest, which have steadily worsening projections by the week. Maryland’s, Virginia’s, and Washington D.C.’s forecasts now look more like North Carolina’s than New York’s. Philadelphia and its collar counties, both in Pennsylvania and New Jersey, have increasing risk for resurgence, and for a second week in a row, the forecasts around New York City have worsened. What's more is that for the first time, we now detect increasing risk into Connecticut (New Haven) and up into the Boston area. The time to act preventatively for the Northeast is slipping away; if they are to salvage their school reopenings, the moment for action is now. 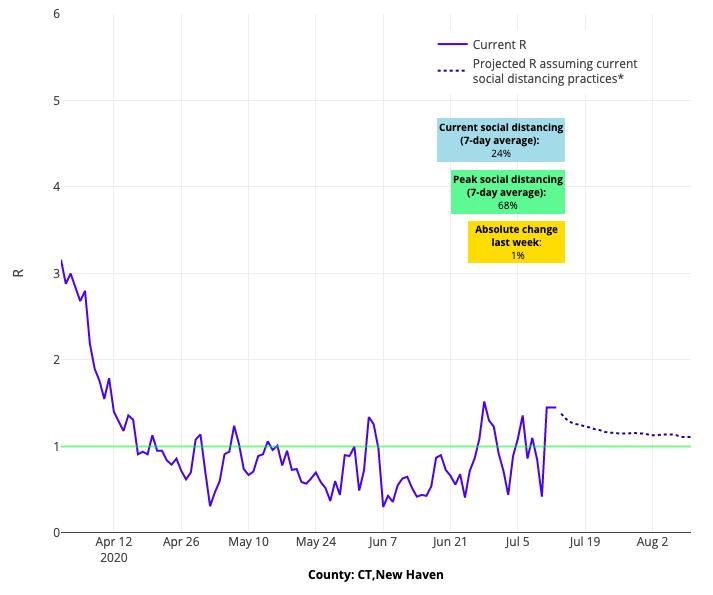 This week, in addition to releasing our four-week case projections for 519 counties, we’re also revealing modeled scenarios that reflect how tightening restrictions throughout the country might affect our ability to neutralize the surging epidemic, even in our hardest hit areas, before the fall. These new forecasts, which can be found on the “Projected Cases with Roll-back Scenarios” tab on our webpage, model scenarios for three different mitigation zones that reflect the guidance recently shared with state governments by the White House Coronavirus Task Force, for whom these scenarios were prepared.

In our projections, the impacts of these scenarios, which we estimated by the amount of social distancing they would likely confer, are contrasted against the trajectories we forecasted from last week and the peak social distancing the counties were doing back in April. We assume that counties in the Red Zone would likely reduce visits to non-essential businesses (our definition of social distancing) by 50% compared to pre-epidemic; Communities in the Yellow Zone would practice 40-50% social distancing, and those in the Green Zone would be closer to 30%. We only included 158 of our largest urban areas in this analysis, as they have data from sustained transmission starting from the earliest days of the pandemic in the U.S. 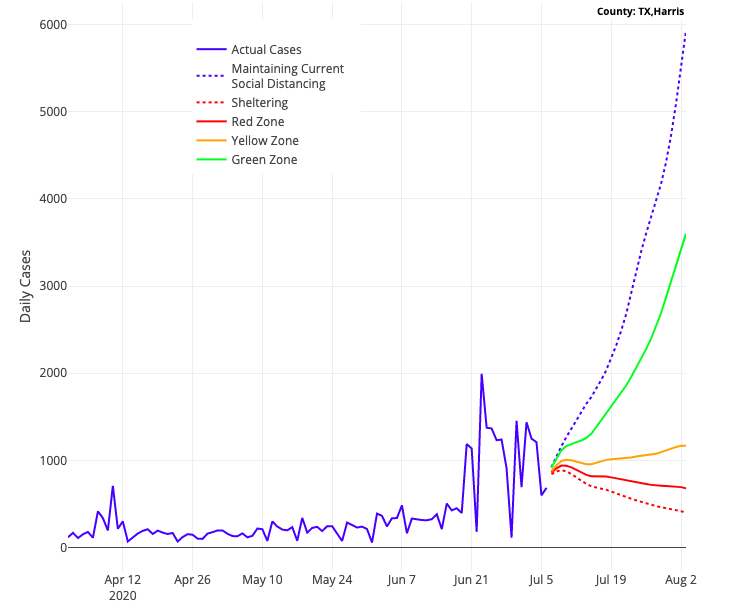 Above are the projections for Harris County in Texas.

While there is uncertainty in the assumptions we made about the impacts these scenarios could have on social distancing, there are relative inferences here that are critical in understanding the challenge ahead. First, we must face the reality that many counties are going to require a fair amount of social distancing, even if we can get the surging epidemics to reverse, to significantly degrade their case counts. Looking across each county, Yellow Zone, or at least 40% distancing, is clearly the upper limits of what we can expect if we are to contain this epidemic heading into the fall, particularly in our more populated areas.

Second, for those areas that have fully lost control of virus resurgence, like in Florida, Texas, Arizona, and California, even the most dramatic efforts (e.g., full quarantine) will require substantial time to get case counts to safer levels in the early fall. It took a while for some of these counties to get to several thousand identified cases a day; breaking the transmission cycle will take equal, if not longer, time to abate.

Finally, for those areas with quickly increasing transmission rates and forecasts, but with case counts that are still within the low hundreds, there is still a real opportunity to quickly restore some safety by the end of August if sacrifices are made right now. Even areas that appear relatively calm might see the gathering storm clouds around them and realize that a pause now can produce greater gains for the fall and prevent them from getting subsumed in the current wave sweeping the country.

Ultimately, what’s at stake is whether we can successfully transition from summer back to work and school in the fall in many locations of the country. Our team has joined the American Academy of Pediatrics and many others in our steadfast commitment to safely reopening schools, as the value of in-school learning and services far outweighs the individual risk of COVID-19 to children. But children do not live in a vacuum, and while their risk may be lower, the risk to their parents, teachers, and school staff should not be trivialized in our reopening plans. Opening schools always required, as a first step, a community commitment to and confidence in reducing disease burden so that we could protect our families in the fall. Just as some in our country have voted with their feet to resist the simple interventions that could control this epidemic, so too will many others vote with their feet to resist placing children, their caregivers and their teachers in unsafe environments.

Make no mistake, we have a lot riding on the decisions we make this week. We need to mount a response before it’s too late.