Another week for the PolicyLab forecasts and we find ourselves in a dire situation, with elevated cases in many regions just as we entered the July 4th holiday, one of the busiest travel weekends of the year.

Last week, even as the epicenters in Arizona, Texas, and Florida captured our attention, we were equally trained on deteriorating forecasts for areas like Las Vegas, Los Angeles, Northern California, Kansas City, Mo., Tulsa, Greenville, SC, and Atlanta—a distressing sign that widespread transmission was moving quickly across the country. We were also worried about signs that the virus was spreading northward to Baltimore, Wilmington, Philadelphia and all of the major cities in Ohio.

Now, as we wait to see what new transmission dynamics were introduced from Fourth of July travel, we are seeing fragmented responses throughout the country to the crises that are unfolding. We have watched as governors who were once emboldened to reopen quickly are being forced to begin retreating in the face of surging hospitalizations and depleted health care resources. Many governors, including those of Texas, Arizona, Colorado and Michigan, closed bars in advance of the holiday weekend. Some states, such as Nevada and North Carolina, saw statewide masking mandates introduced and, in the last two weeks, the mayors of Miami, Savannah, Ga., Houston, Phoenix, Salt Lake City, and Indianapolis instituted their own masking requirements in the absence of state orders.

The big question now is how this diversity of responses will impact cases on the ground. Will spotty masking and distancing mandates be sufficient to deflect runaway epidemics? Or will the sheer magnitude of the widespread transmission that many states are experiencing overwhelm any benefit that masking requirements or bar closures might have provided because they came too late?

The big question now is how this diversity of responses will impact cases on the ground. Will spotty masking and distancing mandates be sufficient to deflect runaway epidemics? Or will the sheer magnitude of the widespread transmission that many states are experiencing overwhelm any benefit that masking requirements or bar closures might have provided because they came too late?

So far, as we review this week’s modeling data, we suspect the latter to be true. The resurgence is sweeping quickly across the country and marching into American cities that just a couple of weeks back had kept transmission at bay. California’s epidemic has now grown so large it is beginning to resemble that of Florida’s, and dare we say exceed it. That risk is now spreading northward to Portland and Seattle.

Above are the projections for Los Angeles County (left) and San Diego County (right).

Often, we see transmission risk (and reproduction numbers, or Rs) first increase in the collar counties of a major metropolitan area before the city itself significantly worsens. This has been the case throughout the Atlanta area, and now around New Orleans too. Both of these locations, and the states in which they are located, are potential new epicenters to watch as the epidemic is quickly converging across most of their counties—similar to where Texas, Arizona and Florida were a few weeks ago. 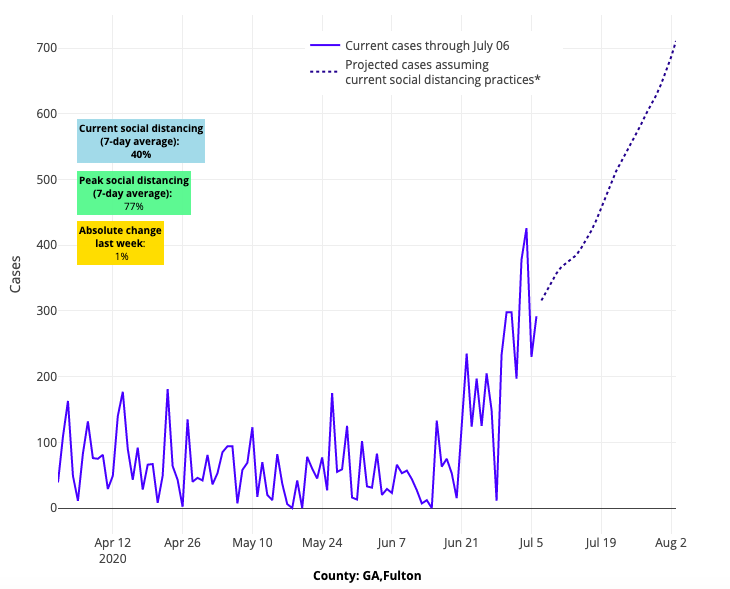 We are also seeing many Midwest areas deteriorate in our forecasts, from Kansas City, Mo., to St. Louis, and right up through communities in Iowa and Ohio. Risk has returned for the Chicago suburbs and is now worsening in areas around Indianapolis, which had kept case counts low for a long time.

What’s more, college towns continue to worsen as they repopulate. Risk is increasing in Auburn and Tuscaloosa, Ala., before the majority of students step back on campus. South Bend, Ind., home to Notre Dame University, which was early to institute masking orders, is experiencing a new outbreak. We’ve even seen some evidence of an outbreak at the University of Vermont, which had been completely quiet until now. If these places are having problems with half-empty campuses, we can only assume the fall will take a major toll on these college towns. 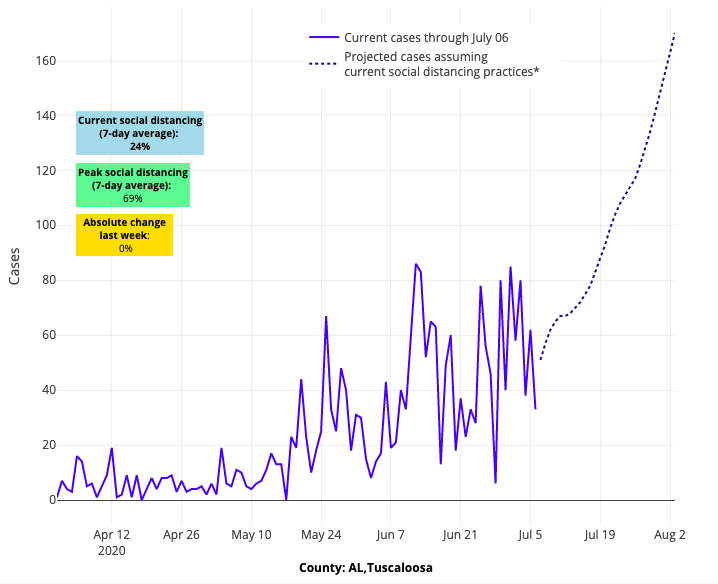 Above are the projections for Tuscaloosa County in Alabama.

Finally, the worsening forecasts we had seen traveling northward along I-95 continued their march this week. Delaware’s projections are the worst we have seen to date, as Rehoboth, a popular vacation destination, joins Virginia Beach and the Carolina coastal areas in having a steadily worsening forecast. Baltimore and Philadelphia continue to have elevated Rs in their forecasts. And most worrisome was to see a simultaneous bump in the Rs across all of the New York City boroughs this past week—the first rise in Rs above 1 in some time for that region. 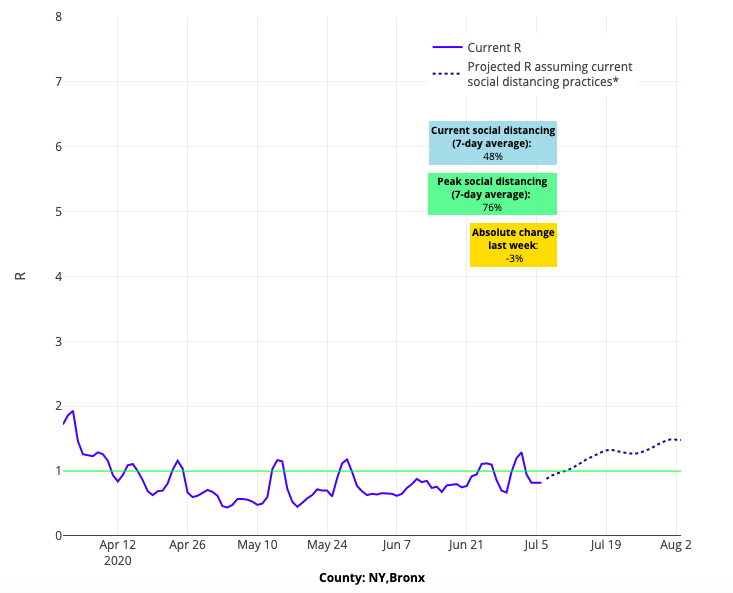 Above is the R estimation for Bronx County in New York.

Make no mistake, now is the time for decisive action by governors in Maryland, Pennsylvania, New Jersey and New York to prevent the crises they experienced this spring from re-emerging. The New England area, the last contiguous group of states with manageable risk in the country, need be worried. They are next.

As our team has been talking to reporters about these dire forecasts, we have been asked about our insights given how rapidly our country has lost control of the epidemic. Here are a couple of the questions raised to our team that are challenging assumption we, like others, have had over the last few months:

The bottom line: we cannot continue to move forward with a fragmented response and expect different results.

The bottom line: we cannot continue to move forward with a fragmented response and expect different results. With September now just eight weeks away, we are running out of time. We need a bolder, more decisive strategy that will reset the country before we jeopardize the very school and work reopenings we have been prioritizing as a critical step forward in our nation’s recovery. What does that strategy look like? Well, to start, we would institute enforced universal masking in public places throughout the country, limit restaurant and store occupancy nationwide, restrict gathering sizes in public spaces and continue remote work requirements for non-essential employees. We now believe that type of national strategy is necessary if we are to begin containing transmission before the fall.

We’ll be back next week with another update and more counties included in our models. We continue to examine the question of whether cumulative incidence (or the total number of people infected relative to the population in the area) is playing a role in discounting future risk in some areas and the measured impact of masking policies across the country and hope to share some of these validations with you soon.