This week our team is releasing new guidelines for school reopening in concert with a dashboard that provides population-adjusted case incidence and county-level test positivity trends—key metrics many school districts and universities across the country are using to inform decisions for in-person and virtual learning.

The challenges schools are already facing didn’t come as a surprise as we spotted signs of trouble ahead in last week’s PolicyLab forecasts. Declining case counts across Arizona, Louisiana, and Florida, were overshadowed by either stalled progress or slowly rising disease burden in northern cities, the Midwest, and the Heartland. This uptick in cases came at the wrong time, as many communities prepared to reopen schools for in-person instruction. Consequently, we’ve already seen schools at the K-12 and higher education levels reverse paths, shifting quickly to virtual learning after witnessing a rise in cases soon after students returned to campus. Just a few weeks prior, so much seemed possible. But in the absence of a significant reduction in cases in many areas, combined with emerging data that symptomatic children are likely to transmit the virus, serious concerns remain regarding the safety of reopening schools. And with the Labor Day weekend looming, the ability to drive case burden down will be further challenged.

This week, our updated models are aided by the addition of county-level test positivity data, courtesy of the U.S. Department of Health and Human Services and the Centers for Disease Control and Prevention. These updates give us further insight into how counties are doing, but also reveal that even those areas which are improving still require signficant progress to put them in a position to open their schools safely. For example, we see tremendous progress in Louisiana, Alabama, and Mississippi following the governors’ rallying behind sensible restrictions like universal masking. But they will need to sustain their efforts as their daily case incidence is still near or well above 100 weekly cases per 100,000 residents—nearly three times what we would consider a minimum threshold for schools to begin thinking about bringing some children back into the classroom, and ten times what we would consider safe for reopening fully with in-person instruction. Similarly, improvements in Arizona and Florida should not be celebrated until they get closer to these case counts. Combating this pandemic so that we can achieve these numbers and allow our children to return to school requires commitment by everyone to mitigation strategies like masking and social distancing, and firm, cohesive resolve by national, state and local leaders to enforce restrictions. 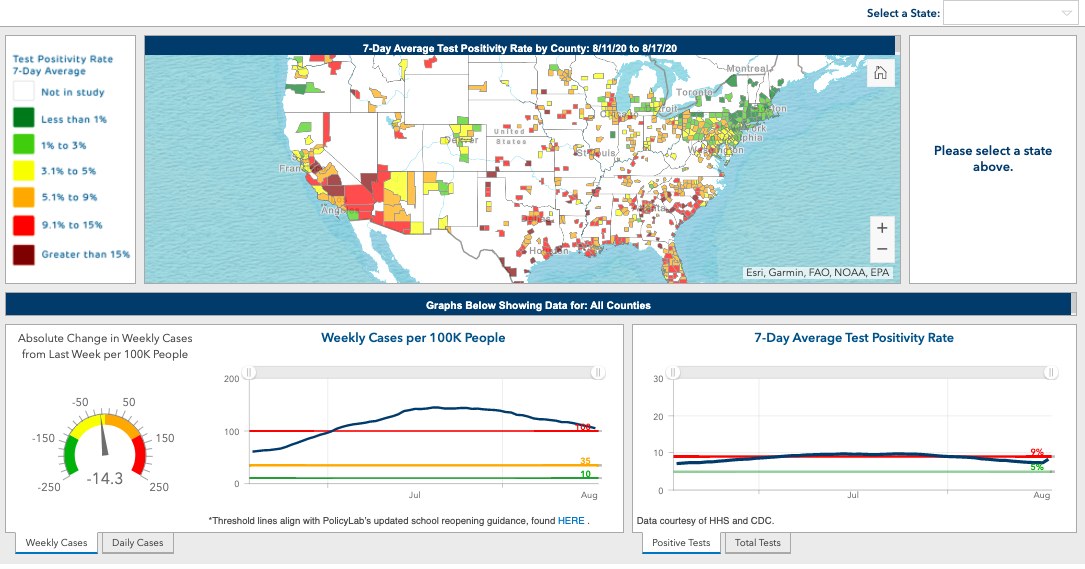 Meanwhile, in other areas of the country, we continue to see concerning risk that we noted in previous weeks. The epidemic in California does not appear to be slowing as many counties took a turn for the worse this week. Southern California is still very much at its peak in many areas, and the Central Valley and large stretches in the northern part of the state are surging right now, far eclipsing daily counts from just a few weeks back. From Minneapolis, to Chicago and deep into the heartland of Missouri, Kansas, Nebraska, Indiana, and Ohio, progress is limited or moving in the wrong direction. Meanwhile, areas in the south that have resisted sensible restrictions, like Georgia, Tennessee, and South Carolina, continue to have forecasts that project stable or increasing numbers. Instability in these areas not only impacts their surrounding region, but also contributes to increased risk up to the Mid-Atlantic states. 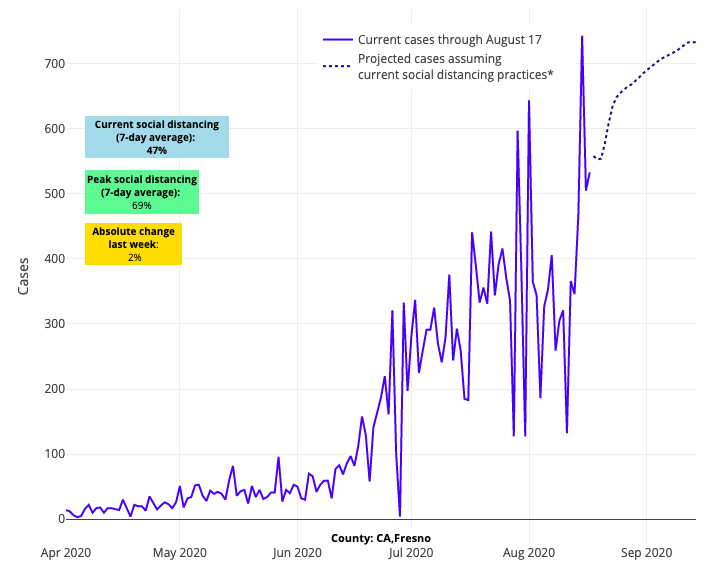 Above are the projections for Fresno County in California.

If there is optimism this week, it is in the continued resilience of the New York region. This stability persists in the face of slowly elevating case transmission among neighbors in New Jersey and in New England (although we note that we could not estimate Massachusett’s risk this week, as they had not updated their case counts since August 11). We remain concerned that this resilence in New York is fragile, as we see elevated transmission rates in three of New York City’s five boroughs again this week. In particular, the Bronx stands out as its test positivity rate and weekly case incidence hover at 1.6% and 40 per 100,000 residents. Elsewhere these numbers would be a blessing, but this background rate of transmission remains a risk to a densely populated area if residents let down their vigilance. We are following similar trends in Boston as we head toward the last weeks of summer, as the rates in some areas are double what they are in the Bronx. Many areas in the Northeast could have a window to reopen schools in the coming weeks, but complacency, abetted by increased risk from potentially exposed residents returning from summer vacation locations with higher disease burden, remain their greatest risks. 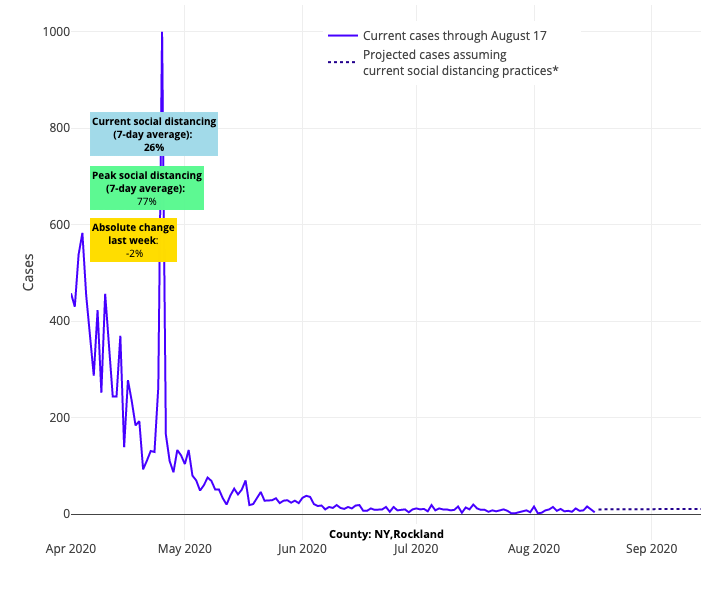 Above are the projections for Rockland County in New York.

This national landscape brings us back to the revised school guidance and accompanying dashboard we released this week. Our team at PolicyLab is cognizant of the tremendous challenge that remote learning will place on working families, and the concern that some children, namely those with learning differences and our youngest children, will have difficulty with virtual instruction.

In consideration of these very real challenges, we developed thresholds for safe reopening strategies that reflect what we’ve learned about 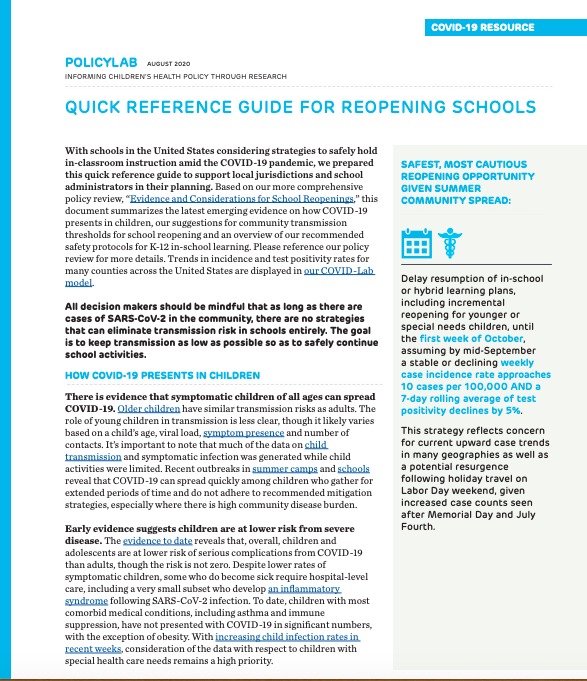 the  relationship of community transmission and schools, as well as emerging data on children and COVID-19. Importantly, we propose thresholds with a focus on trends, which provide a more balanced assessment of risk.  Specifically, our guidance for full in-person or hybrid reopening is a weekly case incidence approaching 10 cases per 100,000 people, alongside a declining trend of testing positivity below 5%. As rates stand now, many may find this threshold to be insurmountable for at least the coming weeks, but we were purposeful in this specific guidance because it mirrors closely the threshold most other countries in the world surpassed before successfully reopening their schools for a sustained period. The guidance also reflects what we’ve learned in recent weeks about rising rates of infection in children and the need to exercise caution as we congregate youth for the first time in many months. While we recognize that few counties, even in the Northeast, would be ready to reopen fully based on this threshold today, we were also mindful of the pending Labor Day holiday, which has the potential to usher in increasing case counts during the first weeks of September, just as schools would be opening.

Nevertheless, for those counties that are close to meeting our outlined thresholds, we do suggest consideration of a staged approach to return children to the classroom. Those counties with declining weekly case incidence between 10 and 35 cases per 100,000 weekly (or intermediate disease burden) might consider in-school instruction for smaller populations prioritized for in-person learning, such as children with special needs or younger, elementary school children (notably, the evidence as we interpret it today would still support lower susceptibility to symptomatic infection among young children). If the first few weeks of September go well, without evidence of outbreaks among students, teachers or families, then returning older children and adolescents to the classroom could be next.

In identifying thresholds, we are also aware of the limitations of rigid guidelines. Frankly, there are always permutations that don’t fit neatly into set thresholds, and we concede that case and test positivity trends have their own limitations related to who gets access to testing and overall testing availability. Schools should therefore also consider their own local context if they choose to deviate from any pre-specified threshold, including their enrollment size (smaller school systems with the ability to spread their students out more easily might be bolder in their risk tolerance); whether their school district or school (e.g., private schools) might have lower rates than are represented in the county trends; and how well prepared the area is to conduct the type of rapid testing that will guide contact tracing decisions—among others.

For those schools that elect to open, and have done the hard work to develop safety plans that prioritize symptom surveillance, masking, distancing, and hygiene/disinfection, we acknowledge the trepidation that still exists. Similar to when our own health system reopened in March, we acknowledged that our doctors, nurses, and office staff, were also concerned. But once they entered the building, and saw the strength of our mitigation plans, our teams have not looked back. Infection control is achievable if it is met with diligence and a commitment to low community case counts. The impossible can become possible, and we can forge forward into classrooms with the resilience that our frontline providers did in early fall, and that many other public-facing workers did thereafter.