COVID-19 Outlook: We Haven’t Yet Turned the Corner in the North

Following another weekly update to our COVID-Lab forecasting model, here are some top-line findings from the latest national COVID-19 data:

Here are some updates from regions we have been monitoring: 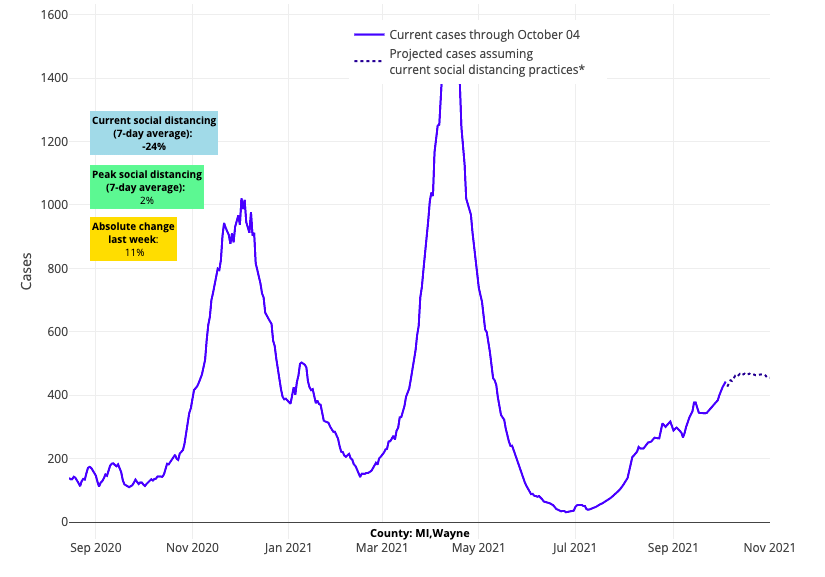 Above are the projections for Wayne County in Michigan. 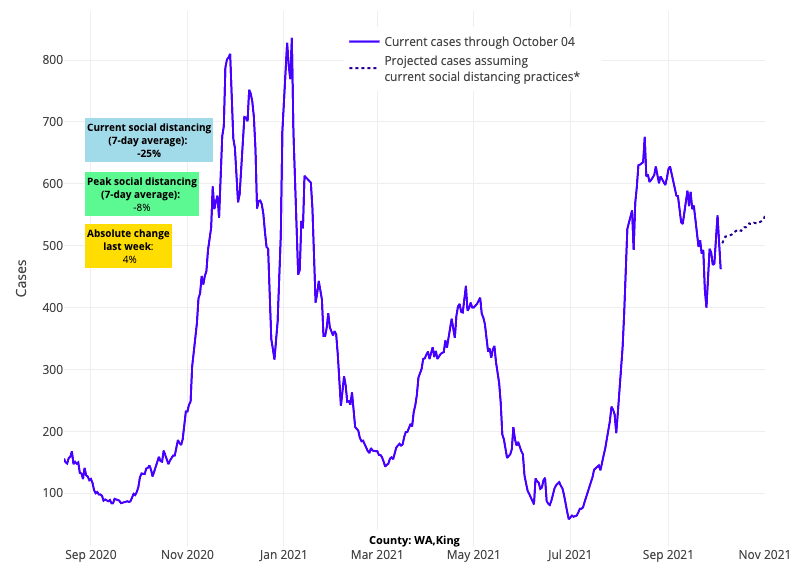 Above are the projections for King County (Seattle) in Washington.

The Northeast Should Take Notice: The Upper Midwest and Mountain States Have Not Turned the Corner

We expressed some optimism in our blog post last week that more highly vaccinated states throughout the Upper Midwest and Northeast were proving resilient against resurgent COVID-19-related hospitalizations among adults and children at the start of fall. With swiftly improving hospitalizations and transmission in the South and West, the country as a whole was experiencing steep declines in case incidence and hospitalizations following a difficult end to summer.

In the data this week, we see declines beginning to stall in many counties out West, and while the Northeast remains relatively unchanged, many northern areas are slightly worse this week. Case incidence has remained stubbornly high in the Upper Midwest and across the Mountain States, and we are seeing new evidence of increasing rates across New Mexico into Arizona. Counties throughout Alaska, Idaho, Montana, North Dakota, Utah and Wyoming—all states with lower vaccination coverage—have already demonstrated that the risk to poorly vaccinated regions has remained substantial as days shorten and colder conditions force people back indoors. Montana, like Idaho and Alaska, is being tested like no other moment in the pandemic, with hospitalization rates that now exceed last winter’s peaks.

The above graph shows daily COVID-19 cases and hospital census per 100,000 people in Montana.

There is also growing concern for Michigan, which had been trailing other states in the region in COVID-19 impacts over the last couple of months, due to what we suspect was higher population immunity from a late winter surge earlier this year. In the last two weeks, case incidence has picked up again throughout the state and hospitalization rates are increasing among both adults and children. Genesee (Flint), Macomb, and Wayne (Detroit) counties have been bellwethers for the state of Michigan in prior waves, and all are now experiencing rising cases once again, with forecasts showing potential for continued increases in case incidence in the coming weeks. 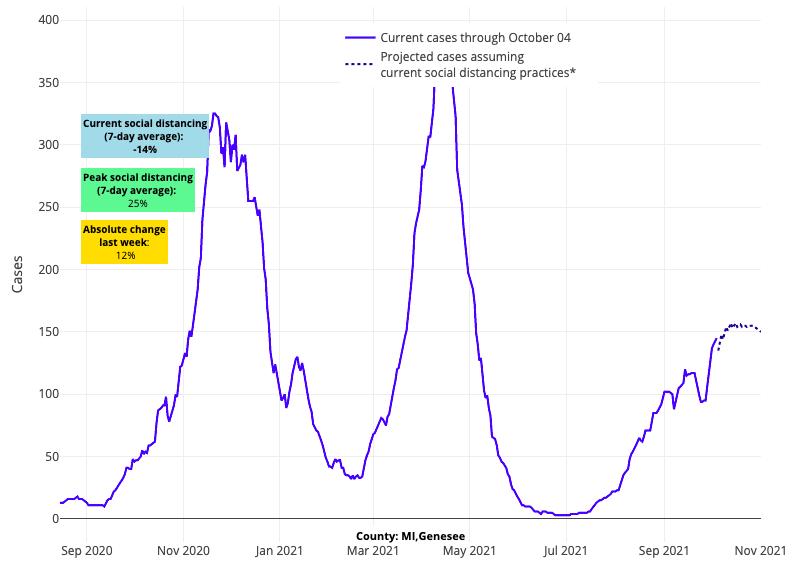 Above are the projections for Genesee County in Michigan.

Even as many highly vaccinated northeastern states (with many areas reporting more than 80% of adults vaccinated) continue to be stable, we would remind our readers that the Northeast did not experience a significant surge last year until the holiday season in November and December. We will continue to watch the Northeast closely over the next eight weeks, as that period of time should give us a better understanding of the benefits of community-level protection from higher vaccination rates during colder periods.

While the month of October is shaping up to be a respite from COVID-19 in many parts of the country—particularly across the South—the holidays are quickly approaching. Case incidence increased rapidly just after Halloween last year and surged through the New Year—this remains foremost on our minds. While the degree of protection from population immunity for the upcoming winter is still yet to be determined, we expect that higher population immunity from vaccination and natural infection will result in less of a surge this year as compared to last.   However, for areas with lower vaccination rates, the potential for another period of resurgence remains high.

As we have noted repeatedly in recent weeks, the current state of the pandemic is being dictated at the regional level. There is still time for communities to maximize vaccinations among children and adults so that we can prevent local surges in all regions this winter and finally move toward the waning days of the pandemic.