COVID-19 Outlook: As Resurgence Continues, Americans Are No Longer Distancing

Last week, in our weekly blog post highlighting the main findings from our county-level COVID-Lab forecasting model, we reported that test positivity and case incidence were increasing across much of the northern United States. Now, as we emerge from the holiday week, we are bracing for the additive impact that holiday gatherings will contribute to this spring resurgence. Here is this week’s update:

Specific areas we are monitoring: 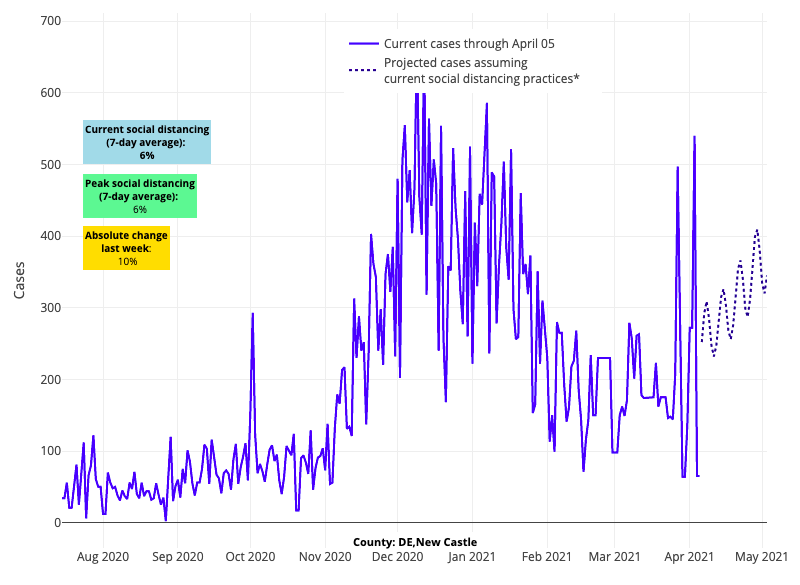 Above are the projections for New Castle County in Delaware. 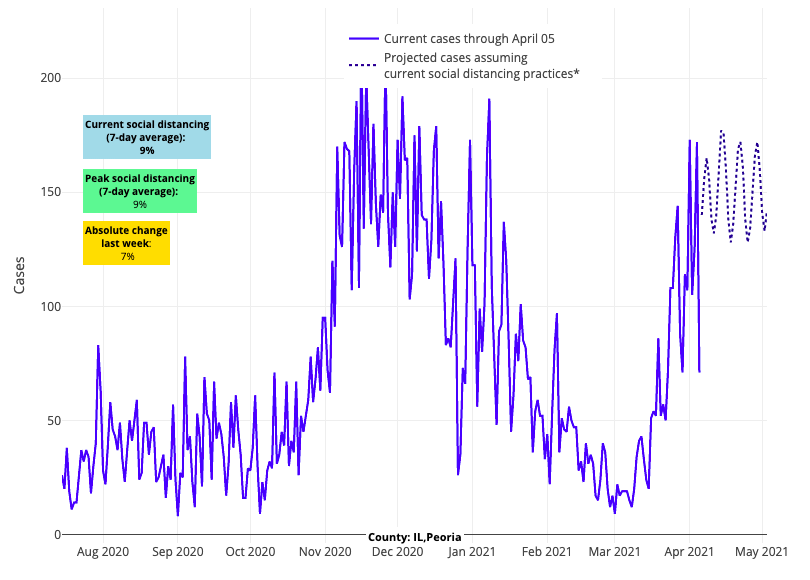 Above are the projections for Peoria County in Illinois.

In this week’s data, we see case incidence increasing over a wider area of the north than last week. Michigan’s trends are particularly concerning, as it looked like the state might have hit its peak in case incidence a week ago but has now pushed beyond our projections. The continued increases in hospitalizations in Michigan should serve as a stern warning to all regions of the country, particularly those where case incidence is already on the rise.

Much has been said about variant strains contributing to increased COVID-19 transmission throughout the country. Some reporting in the last week has suggested that the B.1.1.7 variant strain that originated in the United Kingdom has uniquely changed in its proclivity to infect younger individuals compared to earlier strains of the virus. While variants like the B.1.1.7 strain may be more transmissible, the fact is that transmission of any form of the virus relies on breeches in mitigation efforts (e.g., mask wearing and social distancing) among vulnerable individuals (i.e., those unvaccinated).

Therefore, we should not underestimate how much our collective abandonment of proven, simple mitigation strategies is contributing to the increases in case incidence and hospitalizations we are witnessing in some areas. As more individuals abandon masks while gathering with others in their homes, in restaurants, on the sidelines at youth sporting events, in and around schools, and in many other venues, we should not be surprised by the increases in case incidence.

The figures below (click to enlarge) show two of the mobility variables we have been tracking throughout the pandemic. Using cellphone data from Unacast, the graphs report the total distance individuals are traveling within the 821 counties we have been following throughout the pandemic, as well as travel to nonessential businesses like retail stores and restaurants. Both are expressed as a percentage compared to pre-pandemic levels in February 2020. 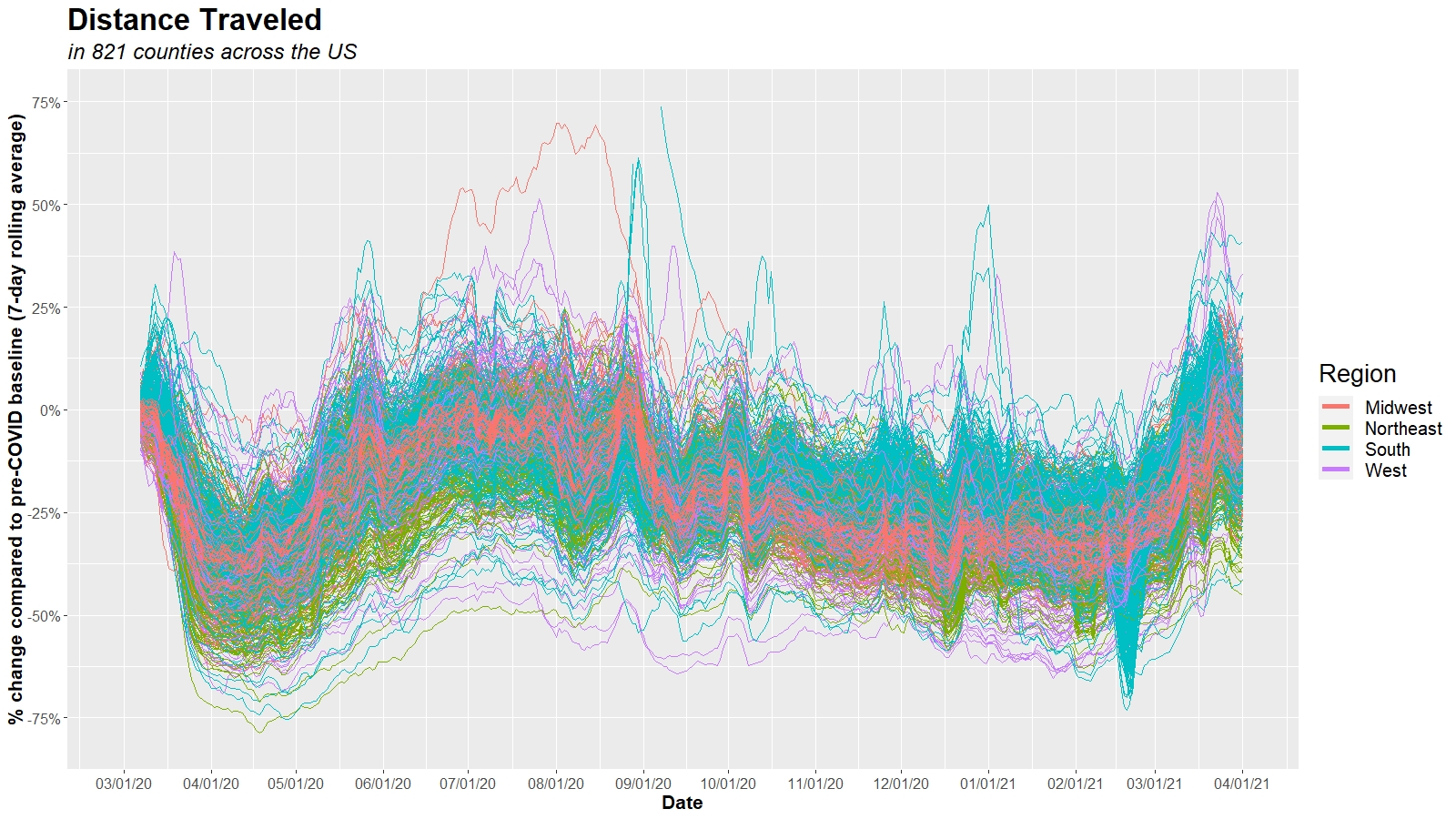 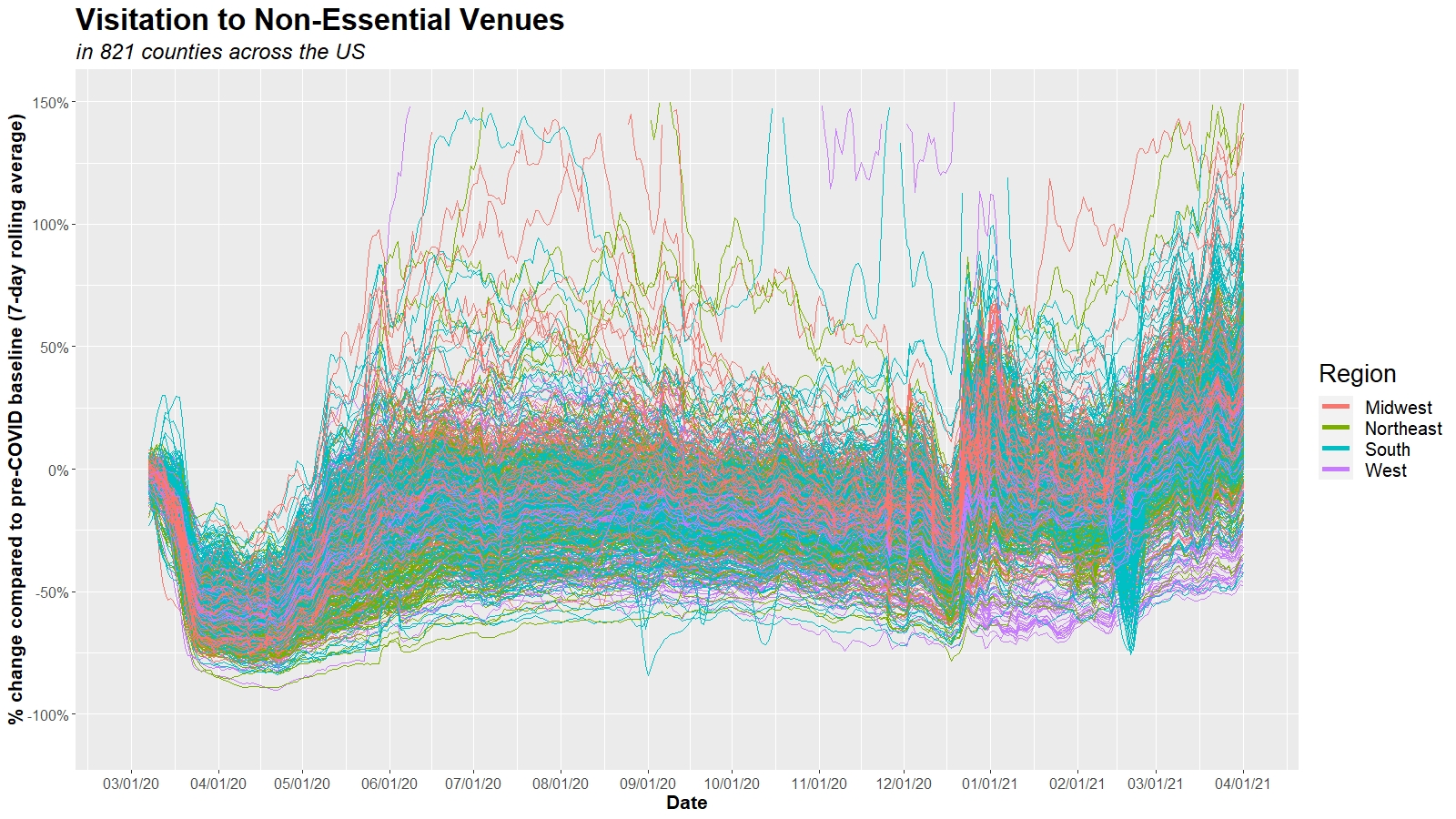 While there is variation from county to county, the directionality is clear. Americans have resumed traveling and gathering, and their mobility is back to, if not exceeding, pre-pandemic levels.

Should we be concerned by increasing case incidence?

The increase in case incidence is concerning, but, as we’ve stated before, we believe that hospitalization rates are more important to track right now as they are a better marker of severe disease. As we await the impact that gatherings during spring break and recent religious holidays could have on transmission, we are concerned that if individuals do not re-embrace mask use and social distancing, hospitalizations will continue to increase across the north and begin to increase in other areas of the country.

We are especially concerned that those that have not had the opportunity to be vaccinated or have not waited long enough after vaccination to build immunity have reclaimed their social lives too quickly. By making these decisions, we are underestimating the potential of this virus to cause severe disease, even in younger adults. We appreciate pandemic fatigue, but we urge patience among all of us to allow vaccinations to catch up.

When will the pandemic end?

From the beginning, this pandemic has been defined by numbers—number of cases, number of hospitalizations, number of lives lost. A sustained, deepening spring resurgence reminds us that this pandemic persists, and we have not yet “turned the corner.” However, we can anticipate that this time will come, a time when all children will return to, and remain in, school, parents and grandparents can resume their normal lives, and young adults, well, can be young adults again.

So, how will we know when we’ve “turned the corner”? The end of this pandemic will not be marked by completely eliminating COVID-19, as we now suspect that SARS-CoV-2 is likely to become an endemic virus that peaks with seasonal transmission in the winter. Therefore, identifying arbitrary case incidence thresholds as targets may not be the ideal approach for determining the end of the pandemic. Rather our team would consider the following concepts more important:

We must not lose hope that the end is in sight. Pundits may message that this was all caused by the variants, but that explanation neglects the more likely explanation: that many of us have moved on from the pandemic, despite it not being over yet. We still have work to do at the population and individual levels. We need to direct vaccine inventory to those areas that are still well behind in vaccination coverage. We must urge younger adult family members and friends to receive the vaccine as soon as they can, while advising them to exercise caution and patience until it is their turn. Many may have underestimated the virulence of the virus even for younger adults; rising hospitalization rates at this late stage should recalibrate those assumptions.

Individuals should know that receiving the vaccine is not just an action to end the risk for themselves, but it is also an action that serves those around them. Working to pick each other up is often referenced as the American way; we need such actions more now than ever.


Jeffrey Gerber, MD, PhD, MSCE, is the associate director for inpatient research activities for the Center for Pediatric Clinical Effectiveness at Children’s Hospital of Philadelphia, and is a co-author of PolicyLab’s Policy Review: Evidence and Guidance for In-person Schooling during the COVID-19 Pandemic.