Now two weeks removed from Thanksgiving, the data we use in our COVID-Lab forecasting models have become more reliable again, and we are projecting growing case incidence in many counties over the next four weeks. This resurgence is occurring as school leaders across the country prepare for the second half of the school year after the holidays.

Above are the projections for Essex County (Boston) in Massachusetts. 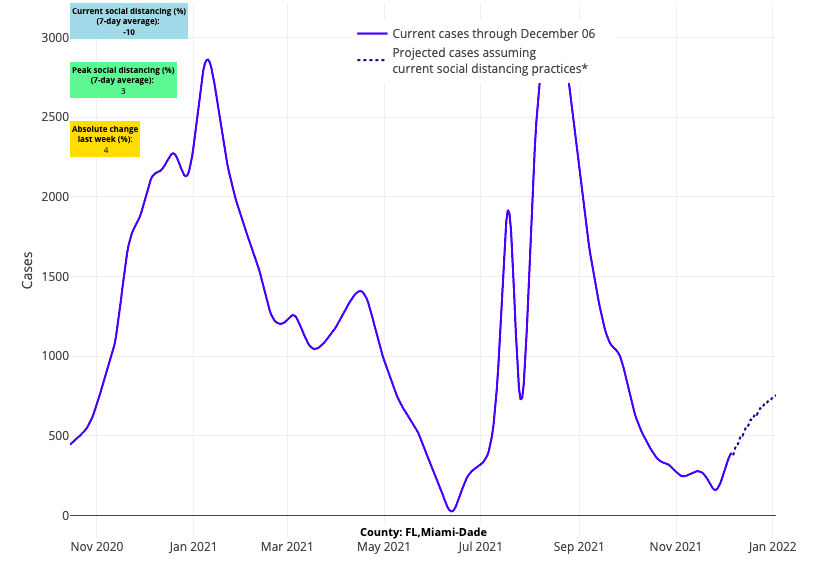 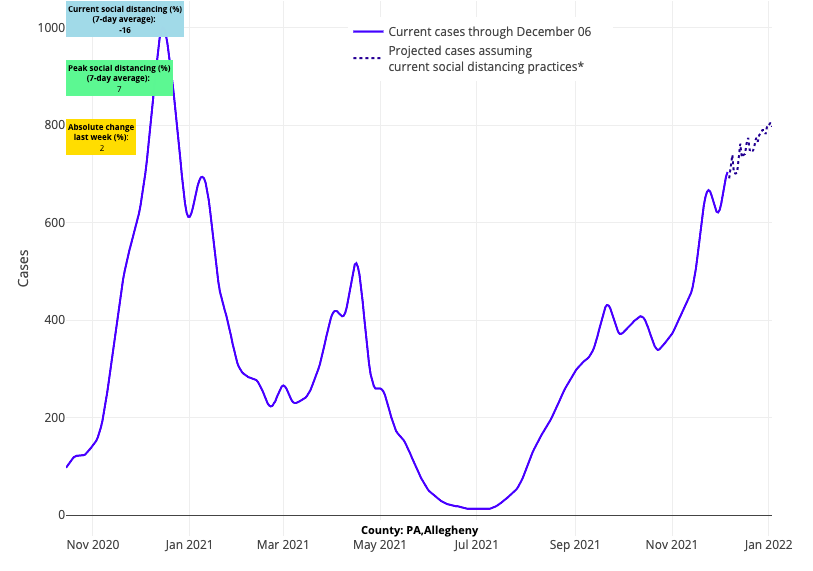 Above are the projections for Allegheny County (Pittsburgh) in Pennsylvania. 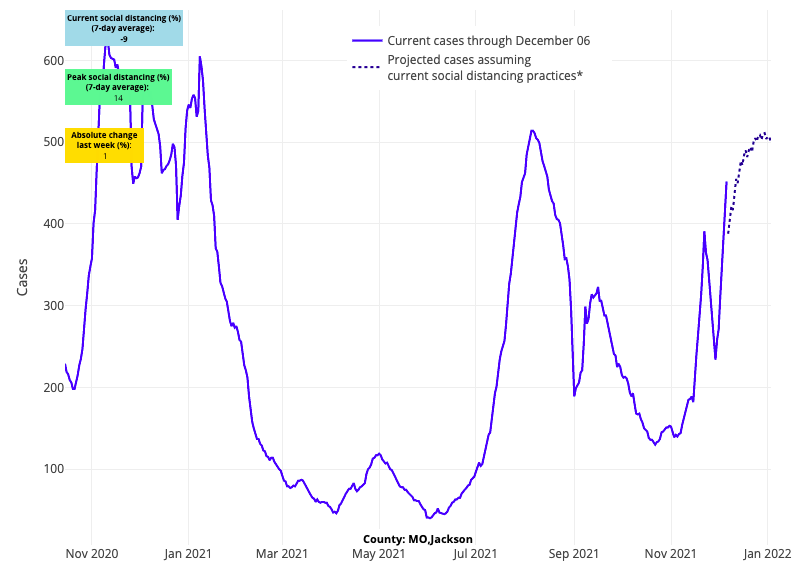 Above are the projections for Jackson County (Kansas City) in Missouri.

Two weeks after Thanksgiving, the impacts of travel and large family gatherings are crystallizing in our forecasts. Similar to a phenomenon we observed last year, we are seeing rising transmission risk in metropolitan centers throughout the country. The reasons for this are likely many but are undoubtedly related to gatherings. Why? Simply stated, the large amount of Thanksgiving travel and gatherings undermined the nation’s pandemic footing and has elevated disease burden in areas of the country that were fortunate to have lower case rates before the holiday.

Now what remains to be seen is the magnitude and duration of these impacts. Areas that were at peak transmission or just beyond peak case incidence (e.g., Colorado and New Mexico) appear to still be moving past peak transmission after the holiday, suggesting that the number of individuals susceptible to disease has dropped considerably in these states for this season. Our projections also show counties in Michigan, hard hit by this wave of the pandemic, are moving towards or past their peak.

However, our forecasts suggest that cities in other areas of the Midwest, Northeast, and Mid-Atlantic will experience further growth in case incidence in the remaining weeks of the year. We are hopeful that continued commitment to increasing vaccination coverage, including booster dosing, and immunity from natural infection may blunt the duration or magnitude of these post-Thanksgiving urban and suburban impacts in some locations.

Many schools in regions where peak case incidence is occurring are now struggling to keep doors open. School-based mitigation measures are less consistent; some regions have relaxed indoor masking policies and others are pivoting to “test-to-stay” programs to reduce the numbers of lost in-person learning days. As has been true throughout the pandemic, school leaders need not only consider necessary mitigation strategies in the moment but also to develop plans for the near future. For the second half of the school year, education leaders will need to consider both local case incidence data and changes in local government mandates.

For instance, in Pennsylvania, Gov. Wolf announced the school masking requirement will end in mid-January, barring additional state intervention, under the premise that by then, all K-12 students and teachers will have had an opportunity to be vaccinated. As such, school leaders and boards in our state—and we suspect elsewhere—are actively discussing how the ending of health department requirements for masks in schools will influence their own choices. These deliberations are occurring alongside close review of data on school transmission and local case incidence. For example, despite rising risk in southeastern Pennsylvania, we are seeing a declining positivity rate from the testing we’re doing in schools through Project: ACE-IT, potentially attributable to increasing numbers of vaccinated students. The weekly test positivity rate among schools in our region who are using “test-to-stay” has been cut in half (1.2% this week, down from 2.7% last week); a near absence of secondary infections in newly vaccinated students in the test-to-stay program is responsible for these declines. Continued vaccination of children in the coming weeks will serve to help sustain reductions in transmission over time, which will benefit schools in the new year as they transition to less restrictive mitigation strategies.

By mid-January, we are likely to see more schools transition to mask-optional policies. Some schools that immediately transition to mask-optional policies may see a bump in transmission if their community has lower vaccination rates, especially among school-aged children and teens. Most schools, however, will likely choose a strategy that is dependent on community case incidence rates, recognizing that transitioning to mask-optional policies during high or substantial seasonal resurgence may forestall recovery and inundate already depleted staff with contact tracing and quarantine. These schools will likely wait to make masks optional until case incidence drops below substantial or high transmission to minimize impacts on their school community. And finally, schools in large cities may still be governed by local masking requirements that are likely to continue for the remainder of the school year. The sheer numbers of children and the challenges faced by our largest school districts will dictate a policy, at least for this school year, that maximizes safety and minimizes disruptions in school operations.

The shift to mask-optional policies may cause some anxiety across school communities, but the milestone of achieving vaccine approval for all children in K-12 should not be understated. We should be doing everything possible to optimize vaccine rates among these age demographics. We should also be careful not to judge school communities that move more rapidly to mask-optional policies after the new year or our largest school districts, which may elect to continue mask requirements. Throughout the pandemic, children have been asked to shoulder a tremendous burden to reduce substantial impacts across our communities. Concerns about mental health and the impacts of prolonged periods of restrictions are increasingly important and should not be overshadowed by a goal of minimizing COVID-19 impacts to adults who have made their own choices around vaccination and personal routines.

Transitioning back to pre-pandemic ways of life can feel uncomfortable, but it is a necessary part of our collective recovery. It is also a recognition that we’ll enter a new phase of this pandemic in the new year, one of recovery and moving toward the conclusion of a pandemic that will never fully recede, but whose impacts we must accommodate to over time in the course of our normal lives.