With COVID-19 cases continuing to increase in many parts of the country and an ever-evolving situation with children back in-person at schools, the COVID-Lab modeling team has decided to reinstate our weekly county-level projections for the 821 counties we have been monitoring. While the national numbers suggest a plateauing of the current surge, it is becoming ever more important to assess the data at a local level. Here are some big takeaways from this week’s data:

Above are the projections for Essex County in Massachusetts.

We may be reaching a national peak, but risk continues in the North and Mountain States

As data reporting has become more consistent after Labor Day weekend, it’s clear that the trends we forecasted in late August are proving true. On the bright side, case incidence in many areas of the South is now quickly improving, and we expect that a decline in pediatric hospitalizations will soon follow. The upper South, including North Carolina, continues to struggle, but our models project a possible peak in case incidence for this region in the next couple of weeks. However, the improving conditions are not just limited to the South; we are seeing evidence that California is moving in a similar fashion and Oregon is not far behind.

The outlook is variable in the Midwest, Mountain West and Northeast. Ohio appears to remain in the thick of it and has not yet reached a peak in pediatric hospitalizations, while neighboring Indiana is beginning to show signs that their counties are nearing peaks in case incidence. In the Mountain West, Idaho has experienced some of the most challenging increases in case incidence and hospitalizations in the country over the last couple of weeks. This sustained pressure is also evident throughout Colorado, Montana, Utah and Wyoming. Case incidence has remained stubbornly high in cities throughout Washington, including Seattle (Kings County) and Spokane. Much of the Northeast, including the New York City metropolitan area, has persistently high but flat case incidence, while our forecasts for the more northerly locations of New England show increasing case incidence over the next four weeks. 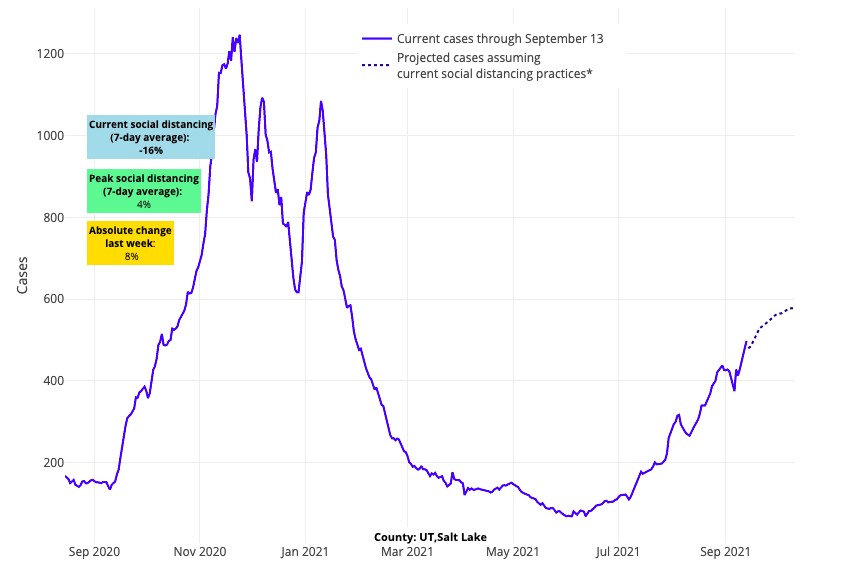 Above are the projections for Salt Lake County in Utah. 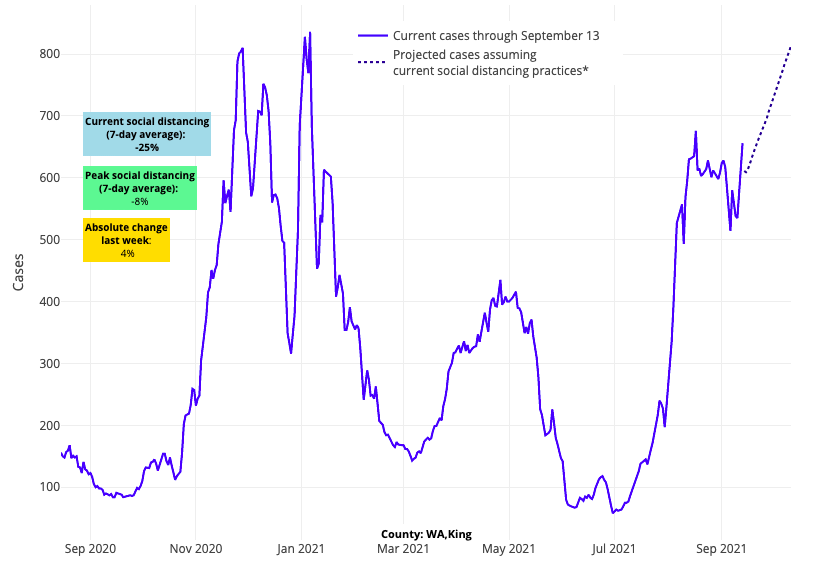 Above are the projections for King County (Seattle) in Washington.

The data coming out of the Midwest, Mountain West, and Northeast create significant uncertainly for the upcoming fall for counties in these regions. Last year’s experience for these locations would suggest that another period of resurgence is on the horizon; however, the significant population immunity that has resulted from strong vaccination efforts, along with the significant community transmission sustained last winter, may insulate these areas in the coming months. What happens in these regions this fall will be the test of just how far along we are in the pandemic.

Pediatric vaccinations are just around the corner

Considerable discussion continues regarding the necessity of a third COVID-19 vaccine dose for adults who are not immunocompromised. Those debates will likely continue into next week when the U.S. Food and Drug Administration reaches a final recommendation. Flying under the radar of the third dose discussions is the availability of vaccination for children under 12 years of age. We are hopeful that children will soon have the opportunity to be vaccinated. Even though overall outcomes for children that sustain a COVID-19 infection remain good, this summer’s resurgence has resulted in an increase in pediatric hospitalizations. This alone warrants a recommendation for vaccination in this age group.

However, vaccination of children will provide additional benefit beyond protecting against hospitalizations. Vaccination of younger children will serve to reduce the opportunity for spread of the virus among children and between children and adults. Further reducing the reservoir of unvaccinated individuals before winter would blunt additional surges in case incidence before the winter holiday season. We remain hopeful that Pfizer-BioNTech will submit their safety and efficacy data to the FDA by the end of the month, after which the agency will conduct its review for emergency authorization of the vaccine.

For now, we are grateful that our models project vast improvements in the coming weeks in areas that have suffered this summer. However, the uncertainty for the fall and winter does raise concern for certain regions of the country that we will continue to watch closely. We are hopeful that growing population immunity from vaccination and natural infection combined with increasing vaccinations in children, will shield us from the tragic winter we had last year.