COVID-19 Outlook: Navigating the Final Leg of the COVID-19 Pandemic

For the last three weeks, our county-level COVID-Lab forecasting model has forecasted declining COVID-19 transmission across the country, except in some areas such as the Pacific Northwest, Colorado, Arizona and parts of the Southeast. This week, we not only see evidence of sustained improvements, but the pace of improvement is accelerating. Here are the latest updates: 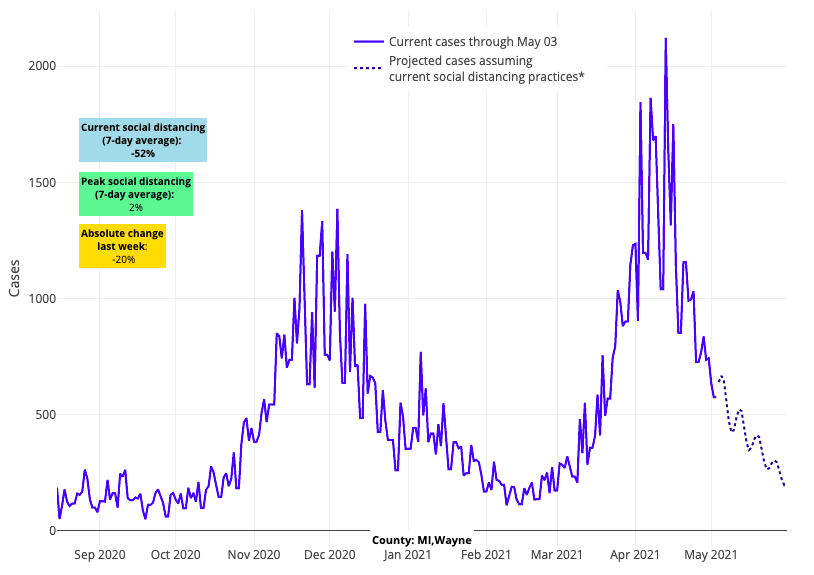 Above are the projections for Wayne County (Detroit) in Michigan. 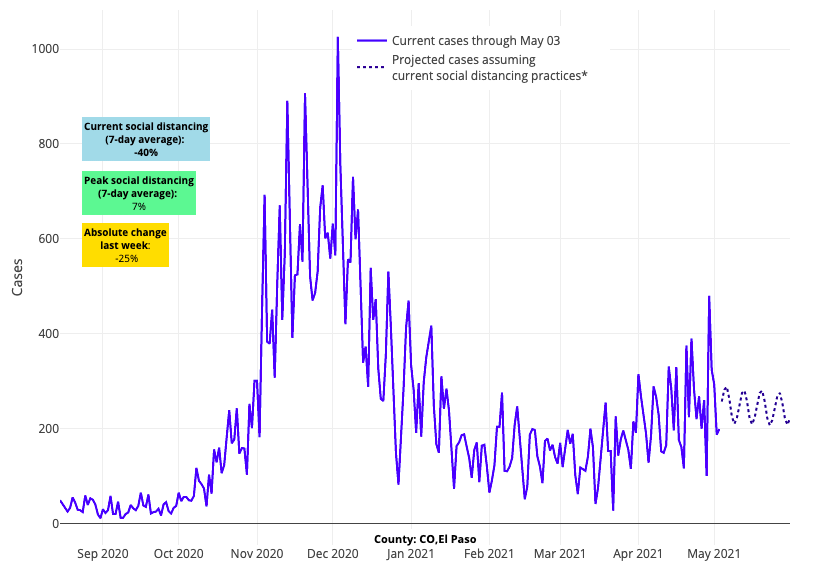 Above are the projections for El Paso County (Colorado Springs) in Colorado.

Importantly, national trends in COVID-19-related hospitalizations continue to improve, even in areas experiencing increasing test positivity rates. This suggests that the proportion of cases that are more severe is decreasing.

As numbers go down and population immunity increases, will herd immunity be achieved?

Much has been written this week about the unlikely possibility that “herd immunity,” and with it the elimination of SARS-CoV-2, will be reached through vaccination and/or natural infection. The inability to achieve herd immunity is multifactorial, including:

As we and others have said for some time, herd immunity will likely never be achieved and thus, this virus will continue to exist. While that may provoke anxiety for those who hoped for a clean ending to the COVID-19 pandemic, this does not mean that SARS-CoV-2 will persist in a pandemic state. Instead, we anticipate it will become a seasonal virus with peaks in transmission during fall and winter. Going forward, uncertainly will exist regarding how significant yearly peaks will be and what proportion of those seasonal cases will be severe.

As numbers decline, do I really need to be vaccinated?

Much of what happens in the future may likely depend on how many of us get vaccinated in the coming months. As case incidence continues to decline throughout the country, it is likely that some individuals will become reticent or more complacent about vaccination. Some that received their first dose may be less motivated to return for their second and others may decide their risk is low and not get vaccinated at all.

How will we know when we have reached the end of this pandemic?

People awaiting a proclamation anytime soon that the pandemic has ended are likely to be disappointed. A long tail of declining transmission with occasional regional resurgence will make such endpoints difficult to declare. That said, we are likely to return to mostly normal this summer as overall rates of transmission continue to fall, and as vaccination coverage increases across the country. Even with the potential for increased cases in the fall and winter due to seasonal transmission, we will continue our path to normalcy. Humans have existed through centuries of respiratory viral seasons—we will have to learn how to co-exist with SARS-CoV-2 as well.

In the meantime, achieving continued success with vaccinations will serve to keep incidence low through the summer and blunt the potential for substantial resurgence next fall. Unfortunately, despite significant early demand for vaccines, vaccination rates have now plateaued near 60%. Novel approaches are needed to optimize vaccination rates. This includes facilitating easy access of vaccinations to all individuals. The focus should transition from large vaccination centers to local vaccine clinics that target areas with poor existing coverage. There are other methods to consider as well, such as behavioral economic techniques being used in Israel. Israelis who are vaccinated can move with much greater freedom across the country, providing a clear incentive for vaccination. Just recently, the University of Notre Dame challenged its students to reach high levels of vaccination coverage on campus in exchange more quickly removing restrictions and masking—and the students succeeded in reaching the goal.

For many, this may feel like an uncertain time in which public health guidance is confusing and endpoints are difficult to pinpoint. As neighbors and families see the benefits of vaccination, we suspect and have seen that many who waited out the first round may now seek their turn in line. New York and the greater Northeast demonstrated in the last couple of weeks that achieving high rates of vaccination quickly can quicken the pace toward a strong recovery. As vaccinations build in other regions, we would expect similar turning points. It’s time to close out the final leg of the COVID-19 pandemic.