COVID-19 Outlook: Managing the Weeks Ahead Amid Swift Omicron Spread

Last week, we were closely monitoring evolving data in our COVID-Lab forecasting models* to see how the omicron variant would impact our communities. Now we see that case incidence has swiftly increased in many metropolitan areas across the country, likely a direct result of omicron presence in these locations. This week, we discuss the implications of this current surge in case incidence and how it might impact the holidays and return-to-school plans in the new year. 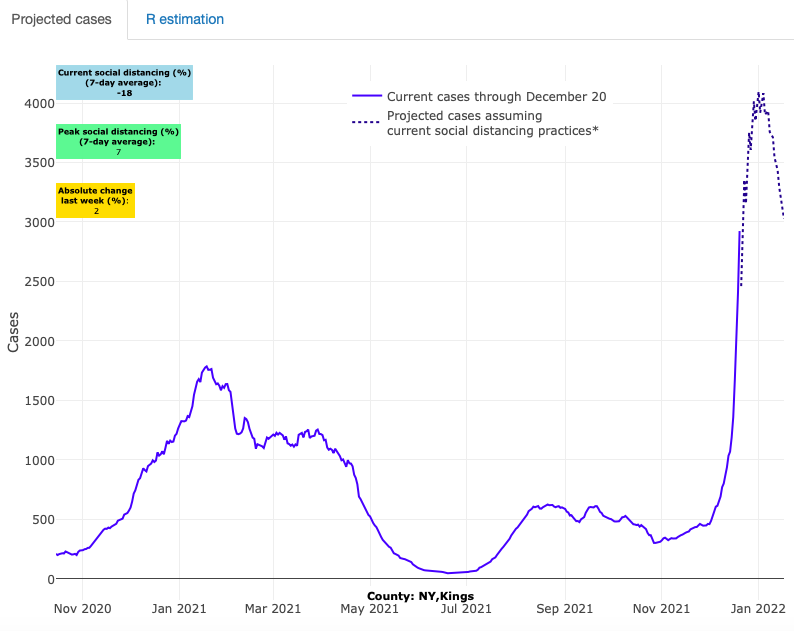 Above are the projections for Kings County in New York. 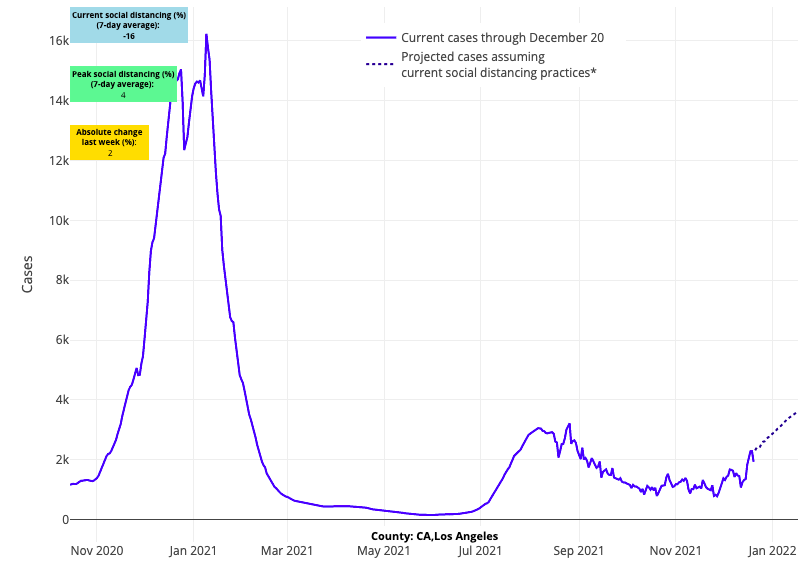 Above are the projections for Los Angeles County in California.

As we approach holiday gatherings across the country this week, case incidence is accelerating in many regions, centered in metropolitan areas and likely the result of omicron becoming the dominant variant in these locations. The CDC announced this week that nearly 75% of new infections across the U.S. are now traced to omicron.

There is uncertainty around the magnitude and duration of peaks in case incidence that are coming, but we have some evidence in the Northeast that while the peaks will be high, they are likely to be followed by quick declines. Lending some confidence to this assessment is the news that cases in South Africa have quickly started to decline after the initial outbreak of omicron.

The speed with which omicron has moved into the country, during a period of expected seasonal resurgence of the delta variant and at a time when national hospital census appeared to be moving past peak, has surprised most public health officials. Its presence in urban locations throughout the country is clearly evident in models this week. Rural areas have been impacted less acutely (although case incidence has remained high in these regions), but as omicron is introduced into more locations, it will be important to watch these areas as well.

Areas of the Northeast, Mid-Atlantic, the Heartland and the Southeast are poised to feel the impact of the variant most acutely as community spread accelerates going into the holiday week. There is also some evidence that peak cases seen earlier this fall in the Upper Midwest and Mountain West may be surpassed in urban locations of the Midwest, Northeast and Mid-Atlantic before moving past peaks. We are particularly concerned about the sudden rise in ED visits in the Mid-Atlantic in a matter of days. Hospital admissions as a share of ED visits have remained lower than expected in these regions thus far, but we will be watching closely to better understand whether the quick acceleration of community spread will be accompanied by a subsequent hospital strain that has existed with prior spikes in case incidence. There is some suggestion that the omicron variant will confer less severe disease, but more data and time are needed to confirm if this will be true.

Omicron infections are growing most rapidly in children

Omicron’s rapid spread in some regions has become clear in our own Project: ACE-IT testing this week, where weekly screening of over 25,000 asymptomatic school staff and teachers and 7,500 K-12 students has revealed a sharp increase in test positivity. This week, 1 in 60 adults tested positive, and 1 in 20 children and adolescents tested positive. This represents a doubling of test positivity in adults, and a nearly 5-fold increase in children in just the last two weeks. Of note, rates of test positivity are higher in unvaccinated individuals: 1 in 33 unvaccinated adults and 1 in 12 unvaccinated students are now testing positive.

These data support the fact that transmission is now increasing disproportionately among children compared to adults. We understand this will result in substantial anxiety for many families, but we can offer some context amidst this growth in pediatric transmission. Fortunately, so far hospitalization rates in children remain below expected rates for a typical influenza season. Additionally, some of the children with a SARS-CoV-2 positive test are in the hospital for other reasons and are being detected on surveillance admission testing. Nevertheless, we are seeing cases of moderate to severe disease among hospitalized children, including otherwise healthy children, particularly those who have not been vaccinated.

For families whose children have been vaccinated, they should have comfort with the knowledge that vaccination is effective, particularly against severe disease. For children who have not been vaccinated, the risk for hospitalization is higher. We remain concerned with a lagging vaccination rate in children, as nearly 45% of children in the Philadelphia region are still unvaccinated, including 75% of children between ages 5-11. We want families to know that now is the time to pursue vaccination for eligible children.

Preparing to gather for the holidays

With plans already in motion for family gatherings, the evidence continues to remain strong that while vaccination does not eliminate risk of infection during periods of widespread community transmission, it continues to reduce that risk appreciably, particularly for severe disease.

Families in which everyone is vaccinated, including receiving a booster if eligible, can gather safely this year with the understanding that the risk is manageable and akin to gathering during a typical flu season. Families that have vulnerable members may opt to seek testing prior to gathering to provide an additional level of protection. We know that access to testing is limited and so in circumstances when vulnerable members of the family are present, consider gathering outside when possible or utilizing masks when gathering inside. Additionally, family members should be mindful of even minor sore throat or cold symptoms as these might be enough to alter plans.

For families with large numbers of unvaccinated individuals, holiday gatherings may be a jump-off point for additional viral transmission and subsequent significant illnesses. We would urge all to consider the speed by which this current variant is moving through communities and reconsider decisions for vaccination in the days ahead.

For unvaccinated individuals who have already had COVID-19, we do recognize that prior infection does confer some benefit against future infection and possibly severe disease. However, it is not clear whether prior natural infection provides comparable protection to vaccination and likely the further removed from infection, the less protection a person would retain. We would recommend these individuals pursue vaccination as soon as possible.

What will omicron mean for children and schools in the new year?

For schools nearing winter break, the time off could not be more welcome. The level of pandemic fatigue is high. Understandably, schools are looking to update their school safety plans in the new year, even as they now are focused on responding to omicron risks.

Although there has been some anxiety that heightened omicron transmission over the last two weeks will mean an escalation in restrictions on schools, including virtual instruction, we join many in our school community in the assessment that pivoting back toward higher restrictions is no longer an option at a stage of the pandemic when all adults in the community have been offered vaccination. Schools have learned throughout the fall how to manage operations with higher rates of transmission in children. The more imminent concern now is how to reopen schools safely in January, and then to begin to outline guidance on how to reduce restrictions when community case incidence eventually declines.

Some may see the rapid acceleration in case incidence in children as evidence that reducing restrictions will be delayed yet again, but our team is not certain of this fact. Rather, pediatricians like those among our team are quite familiar with the swiftness by which case incidence has increased in children; this is how many seasonal viruses evolve during the winter. We are optimistic that while the omicron variant will result in a rapid and higher peak in case incidence, the duration of this period may actually be shorter as it moves quickly through communities.

With a significant increase in case incidence, continued practical choices like masking are warranted to limit spread. As more data become available we will be able to assess the impact of omicron on the number of moderate to severe disease cases and provide further recommendations on the need for certain mitigation efforts. Early evidence has suggested reassuringly that omicron may be less virulent than prior variants, but we would caution that accelerating emergency department visits and the nearing holiday should give schools pause in making any abrupt changes to mitigation until later in January when these impacts are clearer.

Our team believes hospital admission rates will be the best measure of omicron impact, and we will be focused on these numbers per population by region in the coming weeks. Substantially reduced hospitalization rates may be the guide for permitting a transition to mask optional. Our team has been working with schools around the region to consider this transition. Most agree and will appropriately await a period of declining hospital admissions and community incidence early in the new year. That strategy recognizes that we are still gathering data amidst another surge, but also provides useful context for community members who are ready to take the next step toward normal school days.

We will return in the new year with a fuller assessment of community forecasts and impacts from the holiday season. By mid-January, we hope to provide more clarity on recommendations for late winter and opportunities to shift strategies in school mitigation as communities recover from the omicron-led resurgence.

Have a safe and happy holiday season from the PolicyLab team.

*Please note that Maryland forecasts are omitted due to insufficient data updates since early December.