Our forecast models this week for COVID-19 transmission across 389 counties in the United States come at a time of upheaval and heartbreak across American cities after the murder of George Floyd. The now daily mass protests follow just behind the first big traffic surge since the pandemic began as many flocked to vacation destinations on Memorial Day weekend.

We are still 1-3 weeks away from knowing the full impact of these events on COVID-19 cases because the normal lag time for identifying community spread of this virus is about 2-3 weeks (roughly a week before individuals feel ill and another week before they are typically evaluated and receive test results). That said, the data we released in today’s update suggest that increasing temperatures and humidity levels are proving beneficial in combating the spread of COVID-19 in most counties, as evident by the reducing risk for widespread community transmission.

The benefits of high temperatures and humidity against COVID-19

Why are we seeing stronger seasonal effects in many areas as we move into summer? To some degree, another week of high temperatures and humidity levels across the country is adding richer detail to our models about temperature effects—increasing confidence of the seasonality we are observing and refining its effect on the models. But from the start, we had suspected that, if SARS-CoV-2 was like other seasonal respiratory viruses, respiratory transmission would decrease as summer arrived. It is hypothesized that higher temperature and humidity cause the respiratory droplets containing SARS-CoV-2 to more quickly to drop to the ground, creating less risk for respiratory transmission, which can be more infectious.

With these likely effects, our models are now foreseeing the possibility of a relatively normal summer in many counties.

The majority of communities continue to flatten the curve

Last week, we detected a rise in cases in many locations that had reopened, the majority of which we projected would subsequently stabilize—a phenomenon we referred to as “finding an equilibrium.” This equilibrium reflects the likely beneficial effects of warmer weather on reducing widespread community transmission, balanced against the increased exposure risk inevitable with the relaxation of social distancing.

However, each community is unique and may find this equilibrium at different times. As communities relax their social distancing, it will be important to not just assess COVID-19 cases and weather effects, but also to monitor local hospitals’ capacity to handle new patients. In some areas, like Alabama, which are showing favorable signs of stabilization, this issue was acute two weeks ago as ICU beds were scarce, and further community transmission could have overwhelmed health care systems in rural counties. However, areas around Memphis, Tenn., and down into Mississippi, as well as across North Carolina and Indiana, have still not reached that equilibrium, and remain worrisome in our forecasts. Nevertheless, these areas are more the exception than the rule, making us hopeful that most less-dense communities will continue to benefit from warmer summer months and further tolerate continued relaxing of social distancing. 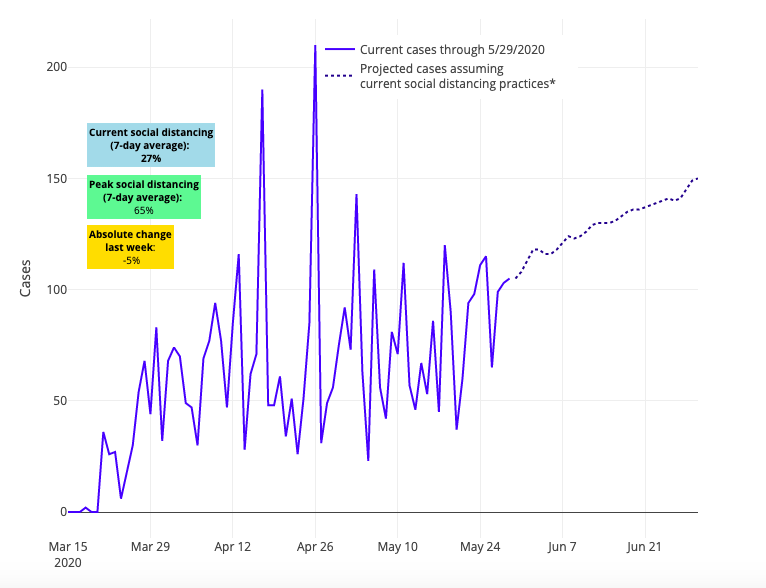 Above are the projections for Shelby County in Tennessee.

The harder question has been how to interpret the forecasts we’ve made for more densely populated areas. Clearly cases were increasing in these communities too as they reopened, but would their trajectory mimic that of the more rural counties, slowly climbing before case counts stabilized? Or were they above a threshold where there was enough risk for community spread that temperature alone could not prevent further widespread transmission?

Houston and Dallas are two large metropolitan areas to which we have paid particular attention. Cases and hospitalizations are rising—hospitalizations in Houston rose 50% over the last two weeks—and we continue to predict increasing transmission in the weeks ahead. The question is why, when these areas have experienced very high temperatures and humidity levels—exceeding values we had observed across the country earlier in the epidemic, as well as historical temperature and humidity averages.

Above are the projections for Harris County in Texas from the week of May 25 (left) and the week of June 1 (right).

Our data provide some insights into the limits to which weather might mitigate summer transmission in these more densely populated areas: 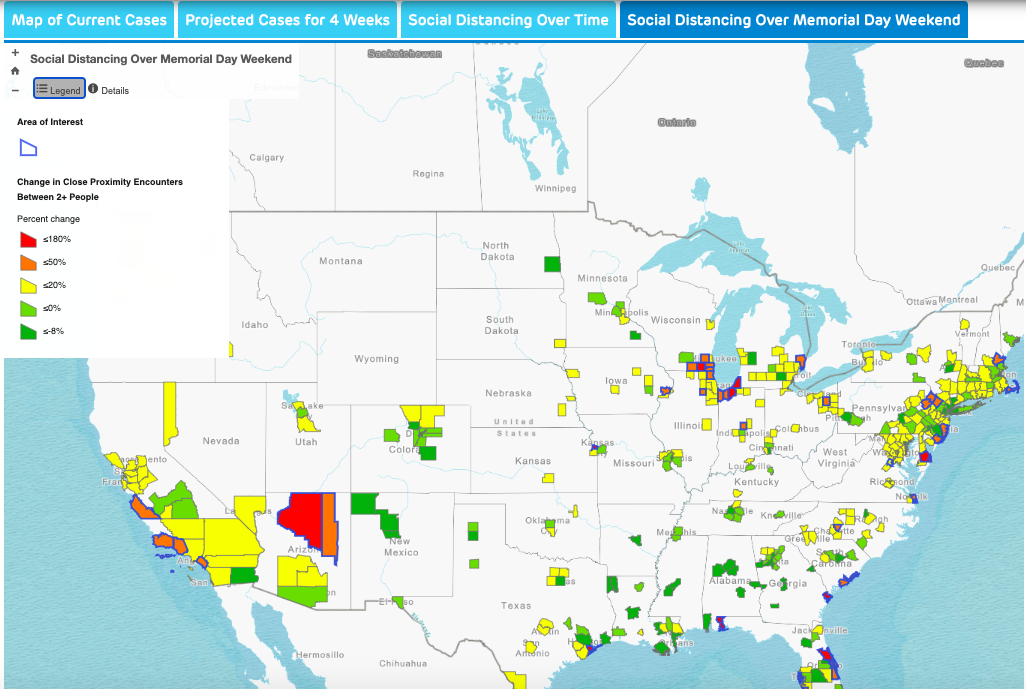 But, as we have repeatedly noted, trajectories can change week to week; therefore, the next couple of weeks bear close watching as we hope, but are not yet convinced, that some of the recent stabilization patterns we have seen in other hotspots we’ve been closely monitoring—including Florida’s southeastern coast, Nashville, Atlanta and Washington, D.C.—will begin to take hold in Texas, North Carolina and Indiana. This week, we’re also seeing some better trends in Minneapolis and Chicago, but their absolute numbers are still too high to categorize them as stable, and we’re concerned by continued spread in the Pacific Northwest (Portland, Ore., and Yakima, Wash.), as well as the southwest corridor, particularly Phoenix. 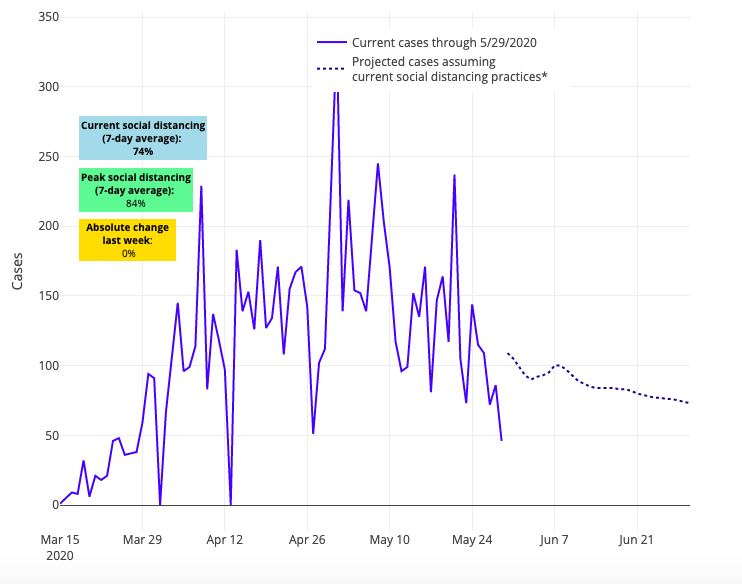 Above are the projections for Washington, D.C.

The risk for any of these areas to have new local outbreaks is high, and there remains uncertainty as to whether new outbreaks could lead to widespread community transmission. That’s why what happens in these communities over the next two weeks may be a leading indicator for other areas that are weighing how quickly to continue reopening.

Data from our biggest tests to date is still to come

That leads us back to where we started this post—that we still sit on the precipice of our biggest test to date: the recent increase in social gatherings related to Memorial Day weekend travel and the crowded protests surrounding George Floyd’s murder. If we are fortunate to see that widespread transmission has not followed, it will add additional evidence that the risk for SARS-CoV-2 spread outdoors under conditions of increased heat and humidity remains small and make us more confident that we might find some respite this summer from the crisis we witnessed this spring. If not, we may need to recalibrate our response.

In a difficult time for all of America, we hope that our models are detecting some optimism for the summer. If we are correct that transmission is being contained, and if people remain vigilant, we could see the return of many favorite outdoor summer activities, including travel, camps, visits to the beach and, dare we say, baseball. We’ll have a new report next week.