This week’s updates to our COVID-Lab forecasting model reveal some paradoxical findings in the numbers:

First, the notes of concern: 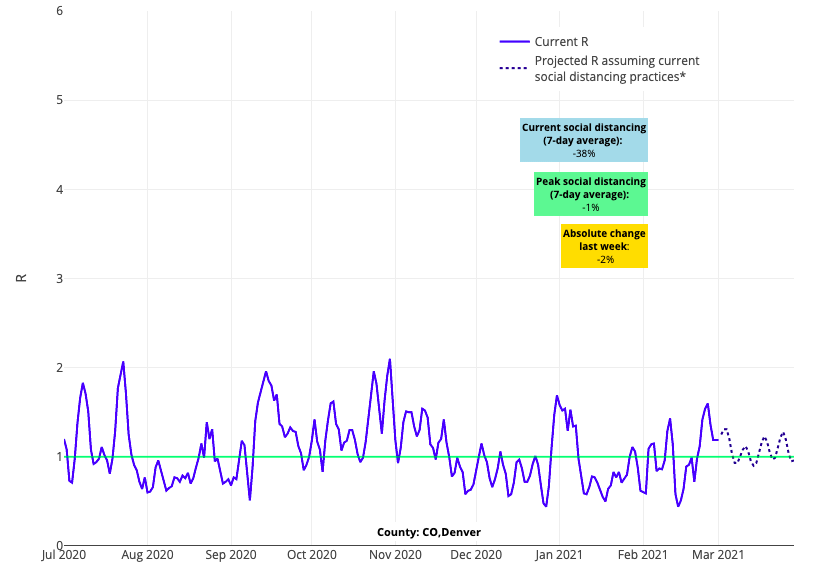 Above is the reproduction number projections graph for Denver County in Colorado.

But there are also reassuring findings: 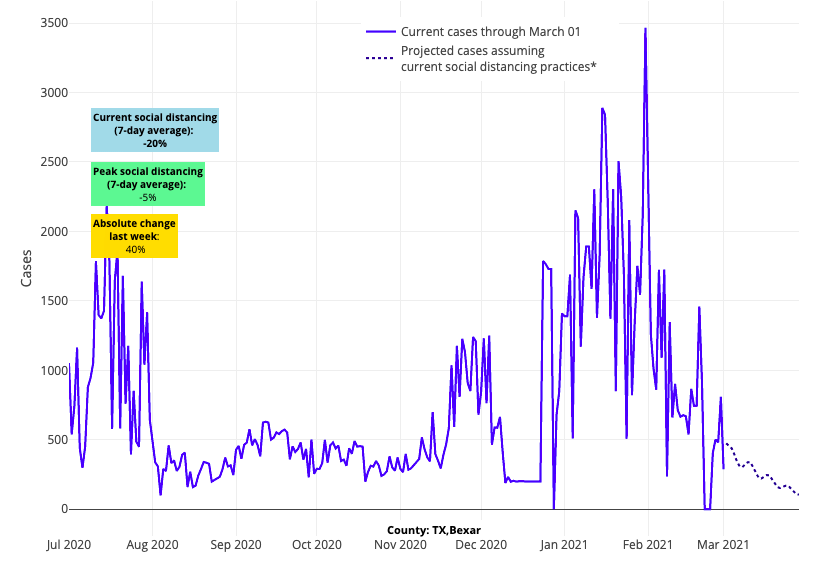 Above are the daily case projections for Bexar County (San Antonio) in Texas.

Making sense of the paradoxical findings

After almost two months of steady, steep declines in case incidence and reproduction numbers across the U.S., this past week many areas experienced a plateau or even slight increase in these metrics. Additionally, our models project that reproduction numbers will continue to teeter around a value of 1 in many regions for remainder of winter. These data reflect a clear change since President’s Day. However, at the same time, PCR testing positivity rates declined in 90% of the counties we follow in our model—down, on average, 1.5% across the country.

How do we make sense of these paradoxical numbers? Is a new wave beginning, potentially as a result of emerging variant strains? Or is this just a minor bump in the road to recovery? We suspect the latter, but it comes with a cautionary note about staying vigilant—wearing our masks in public and keeping our gatherings small—so that we can reap the rewards of a more tranquil spring and summer that is within reach.

At previous points in the pandemic, a decline in PCR testing positivity rates has signaled an eventual decline in case incidence. The declines observed this past week were substantial, particularly along the southern rim of the country from east to west, but also throughout the Mid-Atlantic and Northeast. These abrupt declines in test positivity suggest that the increases in case incidence may be related to recent events in the country, such as Superbowl Sunday and President’s Day weekend. While we did not see increases in case incidence immediately after the Superbowl, the close proximity of it to President’s Day weekend provided ample opportunities, across successive weekends, for people to gather. Many of those gatherings moved indoors due to the significant winter weather that recently blanketed much of the country.

No one can be certain about what is to come, but we are cautiously optimistic that the declines in PCR testing positivity coupled with the anticipated warmer spring weather will lead to lower case incidence, not further increases. Either way, the truth will be revealed in the coming weeks.

There is also conjecture that known circulating variants are the source of the recent increase in case incidence. Data from the CDC reveal that the number of variant strains is increasing in certain regions, and particular concerns were raised for a novel variant in New York City that has grown to represent 25% of all isolates in recent weeks from that region. It is likely that many of these variant strains will become the dominant strains going forward. However, this does not mean that variants are the source of recent case incidence increases. The emergence of variant strains has been regional, while the increase in case incidence this past week was present across vast regions of the country. The steep declines in PCR testing positivity last week are also inconsistent with growing influence of variant strains. These two facts would contradict a hypothesis that increases in case incidence are a result of variants. Nonetheless, these variants are present, and their transmission metrics need to be monitored closely throughout the country.

We recognize that this week’s message is slightly less optimistic than the tenor of last week’s blog post. As we have noted all along, we need to be guided by the data, and this week’s data call for some caution with continued vigilance as we move into the last weeks of winter. However, our interpretation of our county-level models is less pessimistic than other reports you may have seen this week. We remain optimistic that the coming spring and growing immunity from infection and/or vaccination will be strong opposing forces that will allow for continued reopening of our communities. But we share the concern that national case incidence remains high, and that the stalled declines are a reminder to be cautious as we reemerge from our homes; there is still much risk out there if we move too quickly.

What to do about spring break

March tends to be the month in which many schools and universities have spring break. This year, spring break coincides with a moment when many schools are bringing more students back into the classroom. Some schools, particularly in larger cities, may just be opening for the first time since last March; others are returning to full in-school schedules.

We have received a number of questions this week about how schools and families might handle spring break. Although many families will opt to stay at home, others may be planning getaways to provide some measure of relief and hope for the days to come. Spring break will come in different shapes and sizes, with some families electing to travel by car and remaining in relative seclusion, others jumping on flights to destinations that include resorts, and still others gathering in large groups beyond their immediate family. The recent increases in case incidence remind us of the significant amount of virus that continues to circulate in our communities and in spring break destinations. As such, we would recommend spring break plans that limit travel companions to those in your household and allow for relative seclusion.

As schools consider how to plan for students to return to in-person learning after spring break, they must be aware of state or local rules governing quarantine after return from travel. Some states still require testing upon return from travel—guidelines schools will have to follow. In regions where these rules are no longer in effect, schools can choose an approach informed by their own experience during the winter holidays. Some districts might elect to remain virtual during the week after spring break, while others might ask families who traveled to remain virtual voluntarily for the following week. Schools that suspect spring break travel will not trigger increased transmission may opt to resume school as regularly planned, but with greater attention to symptom surveillance and enforcement of the safety protocols they have been following for the past year.

Each school community’s experiences and assessment of risk can be unique. Hopefully families who travel will follow safety plans throughout their trip; many will likely be visiting areas and resorts that have their own safety protocols, which may help reduce risk upon return.

As spring approaches, we are encouraging schools to make the best use of their outdoor space, and we encourage families to do the same. It has been a long winter, and we can all appreciate the first spring-like day, when we run to the parks and can inhale, with relief, though still wearing masks, the early spring air. Spreading out and returning to parks is one of our best mitigation efforts. Spring is always a time of optimism, but never as much as this year, as we leave a winter that has cast a dark shadow over the last year.