COVID-19 Outlook: Returning to Normal, It’s Closer Than You Think

The weekly update from our COVID-Lab forecasting model continues to show signs of optimism for brighter days ahead. Overall, we see sustained decreasing trends of case incidence and hospitalizations across the country. Here are more specifics about this week’s data: 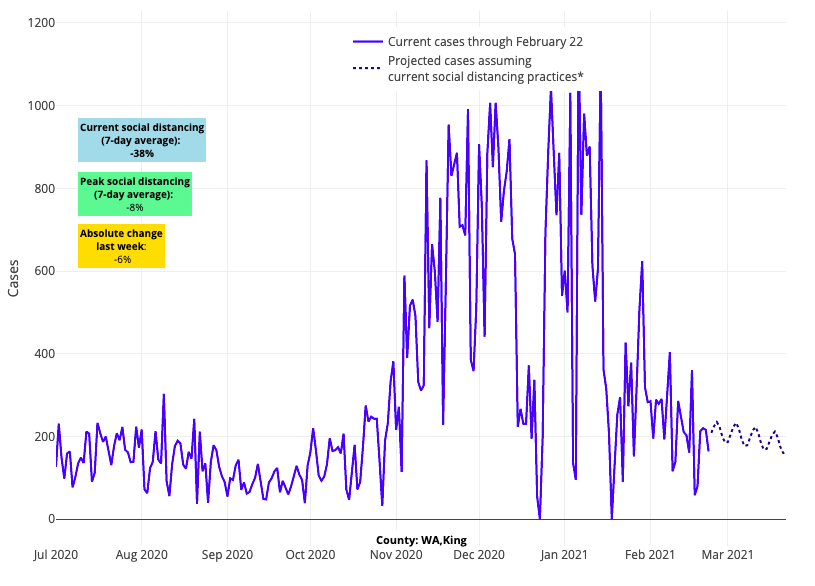 Above are the daily case projections for King County (Seattle) in Washington. 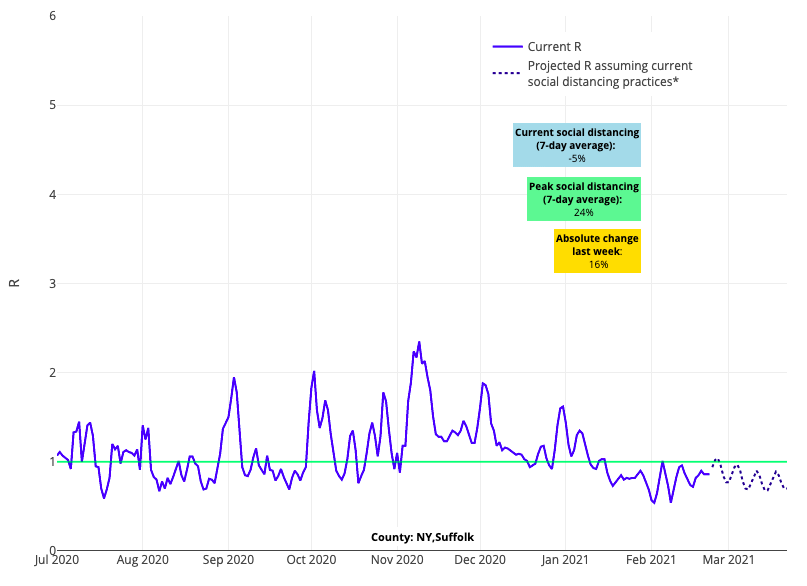 Above is the reproduction number projections graph for Suffolk County in New York.

*The model still includes 821 counties, but we will no longer be offering new projections for any counties that fall below five daily cases on average consecutively for two weeks.

We are mindful that increases in transmission or stalling test positivity rates shown in the data this week may be the result of communities opening up, as well as gatherings that occurred during President’s Day weekend. Many of these gatherings likely took place indoors given the winter weather that much of the country experienced in the last week. In our own region, we saw a persistence in pediatric and adult case numbers following the holiday. This finding is a good reminder to all of us to remain committed to mitigation strategies during a period in which overall incidence remains high, though the overall downward direction is good.

We are also careful not to overinterpret increases in test positivity rates. An increase in test positivity must be considered in the context of other parameters—such as case incidence, total number of tests performed and emergency room visits. Overall testing (i.e., the number of tests conducted) and case incidence continued to decline greatly across the country last week, and emergency department visits are falling in all states except the Dakotas. Emergency department visits are a more reliable indicator of community risk for moderate to severe disease than testing positivity rates; the dramatic declines in emergency department utilization would lead us to think that the slight bump in testing positivity rates (i.e., proportion of the number of positive tests per total tests performed) across some counties this week is a result of a decrease in total tests being performed rather than a real increase in total case numbers. For now, we are mindful that we’re seeing increasing positivity in some states and will be looking carefully at our weekly models for any other signals of resurgence risk.

Peering forward as we pass a defining milestone of the pandemic

As we near the one-year anniversary of a pandemic that has claimed more than 500,000 lives in the United States, it is easy to believe that the darkness we have witnessed will only continue. But the data suggest that better days are coming soon.

Many major news outlets over the last few weeks have continued to print opinion pieces promoting fear and uncertainty. Fear that variant strains will soon overwhelm us and lead to a spring-time surge that rivals what we saw this winter. Fear that the virus is traveling through ventilation systems, undeterred by masks and physical distancing, meaning only double masking and continued isolation can save us. Our predicament has been compared to a perpetual category 5 hurricane about to come ashore, only to be met with potential lockdowns should we relax our guard even slightly. At the same time, other media stories urge the reopening of schools. If a category 5 hurricane is about to come ashore, why would we even consider reopening schools?

Our team is among several that, throughout the pandemic, has been reviewing county-level data on case incidence, emergency department visits, and hospitalizations to provide local areas with enough notice of impending risk that they could appropriately respond. We correctly predicted outbreaks through the Southwest and the Southeast last summer, and clearly saw how the early fall resurgence in the Upper Midwest was likely to fan out to the rest of the country. We warned our own region of the potential for significant accelerated transmission before Thanksgiving, well ahead of this actually happening.

Today, on the other hand, all of the 800+ counties we follow in our model have had a dramatic decline in cases, hospitalizations, and deaths from COVID-19, and we forecast that these trends will continue as we head into spring. The incidence of new cases is down more than 75% since early January and continues to plummet. As disease- and vaccine-induced immunity increase, alongside the end of winter and arrival of warmer weather, we anticipate that these trends will continue.

And yet, we are continually beset with stories and opinion pieces about how these numbers are “deceptive,” why it is important that the new administration inform us that lockdowns might still be in our future, and why we may be on the precipice of the worst moment in the pandemic. Widespread reporting of emerging variant strains speculates that a new pandemic is upon us. A not-yet-peer-reviewed report noting that the B.1.1.7 variant strain from the United Kingdom was doubling every 10 days in Florida has been widely referenced as proof that the next wave had begun. Never mind that what was doubling was the proportion of viral isolates in Florida that were attributable to the variant strain, even as overall numbers of cases were dropping.

However, as the public continues to be peppered by these stories, the observed data have been unequivocally demonstrating, since early January, that the burden of the pandemic is decreasing. Certainly, this pandemic has bestowed an unspeakable toll on our population, and the consequences of COVID-19 on our physical and mental health are overwhelming. However, continually stoking the public’s fear for what is to come without better evidence will only add to this toll. We need to consider how to move forward in the coming months so that we do not further our suffering from more delays in diagnosing other health conditions and continued social isolation that has prevented children from seeing their friends in school or grandparents from seeing their grandchildren.

We must resist making public policy decisions that are informed by speculation and not data.  These include requiring double masks by individuals as we head into spring, deviating from a two-dose vaccine schedule that has been demonstrated to provide excellent immunity through randomized controlled trials or keeping schools closed.

We are not suggesting that we hurry back to normalcy, or that we ignore the possibility that variants will emerge, reversing the current decline in case incidence. However, we have the tools to monitor for this possibility and can respond to such predictions, if and when they happen. For now, the data are telling us that we can begin to move forward in a thoughtful and steady way. For example, allowing for small gatherings while still wearing masks and physically distancing when in the company of individuals that are not members of your immediate home. And, as we consider this path forward, we must remain steadfast in the delivery of vaccinations, which will help ensure that a fall resurgence of this virus, as is typical of many respiratory viruses, is blunted.

The transition forward—including returning more people back to work and school—will need to be slow and steady as we continue to monitor incoming data. We also need to continue relying on appropriate mitigation strategies so we can be as safe as possible as we start this trek towards normalcy. Of course, individuals will need to make personal decisions about their own comfort in this transition, but we are now equipped with knowledge of how to protect each other as we move forward and we have the ability to recognize when to be concerned.


Paul A. Offit, MD, is the director of the Vaccine Education Center and an attending physician in the Division of Infectious Diseases at Children's Hospital of Philadelphia.