COVID-19 Outlook: Cautiously Optimistic a Turning Point is Near

Here are the main findings from the weekly update to our COVID-Lab county-level forecasting model:

Specific areas we are monitoring: 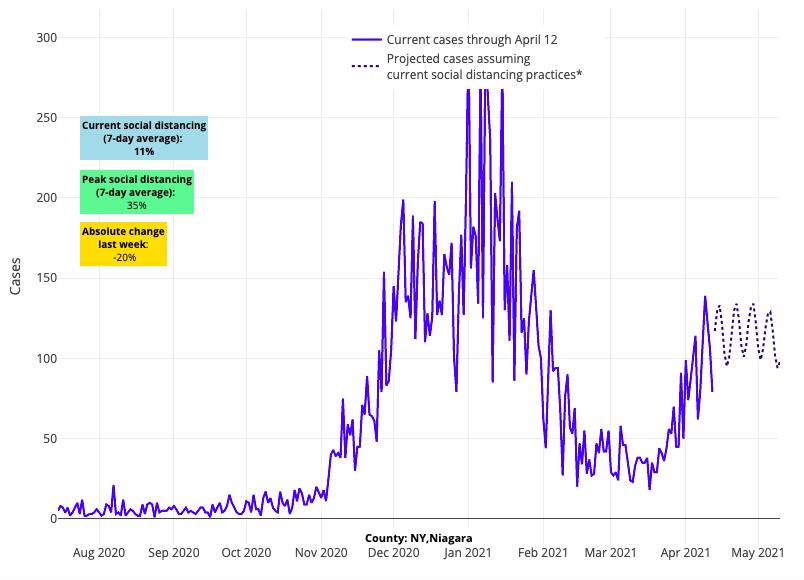 Above are the projections for Niagara County in New York. 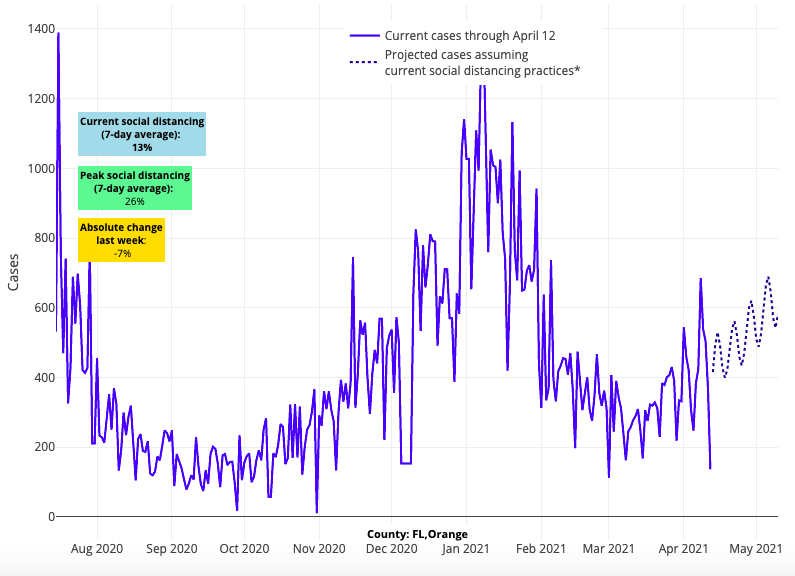 Above are the projections for Orange County (Orlando) in Florida.

An inflection point may be upon us

Well into the second week following the Easter and Passover holidays, we are noting a shift in our COVID-19 projections. During prior case surges in this pandemic, improvement in test positivity rates, especially when widespread over a region, was often a sign that a decline in case incidence and hospitalizations would soon follow. We saw such trends after the winter holidays, and we are now seeing this play out in the Northeast, Mid-Atlantic and, to a large degree, in the Upper Midwest. This—alongside improving projections in and around New York City and observations that Michigan is now moving past its spring peak in transmission—is increasing the likelihood that we are reaching a turning point in many northern areas of the country.

While this is welcome news for the north, we do note that test positivity rates are up in the southern and coastal regions of the country. This pattern of movement from north to south is similar what we experienced last spring, and again in late fall. Increasing reproduction numbers and case incidence in metropolitan areas of the Pacific Northwest, California, Florida, and the lower Heartland bear watching, but it is also quite possible that these increases are the remnants of spring break and holiday effects that may subside in the coming weeks.

All told, we are cautiously optimistic that this spring resurgence is subsiding. Such news is welcome in a week in which the U.S. stopped administering the Johnson & Johnson vaccine as a precaution while the Food and Drug Administration (FDA) and Centers for Disease Control and Prevention (CDC) investigate a possible association with blood clots. Thus far, more than 7 million people in the U.S. have received this vaccine and 6 people developed the adverse event within a few weeks of receiving it, including one death. This is an extremely rare event, but the FDA and CDC are taking appropriate steps to further evaluate the potential association of these events with vaccination. This pause in administering the Johnson & Johnson vaccine may result in some canceled vaccine appointments locally, which will require continued patience among individuals anxious to receive their vaccines. Importantly, blood clots have not been raised as a concern with the Moderna and Pfizer vaccines, and these vaccines continue to be appropriately administered.

How much are children at risk during this resurgence?

Over the last few weeks, there has been increasing discussion regarding the role of children in this spring resurgence. Nearly 75,000 children in the U.S. tested positive last week for SARS-CoV-2, according to the American Academy of Pediatrics’ (AAP) most recent weekly review; this represented nearly 20% of all newly reported cases last week. As the number of cases in adults decreases, children will be over-represented in national case estimates, but this increased proportion of pediatric cases does not mean a dramatic increase in actual pediatric burden. In fact, it is important to recognize that the actual case numbers in youth are still well below their winter peaks (see the graph below, and click to enlarge). 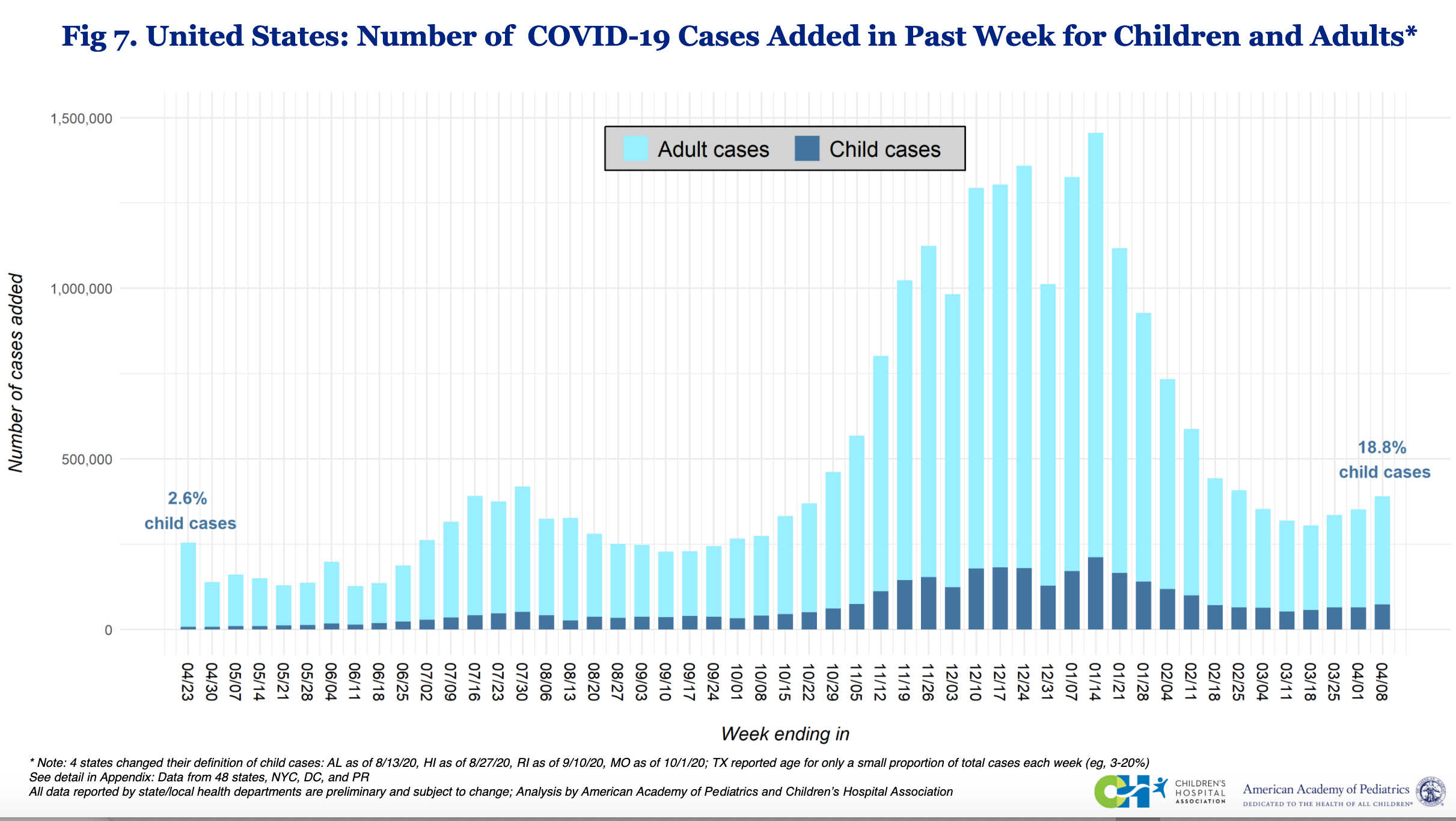 The figure above is provided by Children's Hospital Association and the American Academy of Pediatrics.

Some have pointed to this increased proportion of pediatric cases as a result of schools reopening more fully. While data are still being gathered on in-school case incidence as more students enter classrooms, it remains unlikely that schools with strong safety protocols are the primary location of transmission between children; in-school transmission in these settings has been rare, even during periods of peak incidence. Instead, it is more likely that children are increasingly socializing at family gatherings and group activities. We highlighted in our blog post last week just how quickly Americans have returned to pre-pandemic levels of activity, and children are no exception.

Infections with the B.1.1.7 variant strain grew most quickly for children at the height of the United Kingdom’s winter surge. That, and rising infections now in youth, has led some to warn the public to consider closing schools again in this current resurgence. But our interpretation is far different, and we would advise schools that are doing well to stay the course. We consider:

1. There is no evidence that the severity of infection has dramatically increased in children. Below (click to enlarge) are HHS protect data showing weekly COVID-19 hospitalizations in children and adults across the country. Overall, rates in children remain much lower than adults and have been falling. Yes, there are rare cases of more severe disease in children, but overall pediatric rates and outcomes have not changed substantially since last spring.

3. Increasing numbers of adults are now being vaccinated. Teachers and caregivers are now increasingly being vaccinated, offering them protection as schools return to normal operations. While access to vaccination has been greater for school staff thus far, those parents and guardians who are still awaiting vaccination may opt to keep their children in virtual instruction in areas where community transmission remains high. As more adults are vaccinated, we suspect increasing numbers of children will return to school. The school leaders we have engaged with have been highly responsive to surveys of their own school communities in determining the best pathways to full in-school instruction.

We are in a far different place when it comes to sustained school reopening than we were last fall. Given that COVID-19-related morbidity and health effects are less prevalent in children, and with rising vaccinations in adults, the momentum is clearly in favor of returning more youth to classrooms. As always, school leaders and staff would be wise to reinforce their safety protocols, and testing programs if they have them, to reduce the likelihood of in-school transmission that might necessitate quarantining large numbers of students.

While the last few weeks of resurgence in the northern areas of the country have been anxiety-provoking, we are excited to see evidence this week that case incidence and test positivity is stabilizing or even declining in these regions. As vaccine uptake continues to build across the country, Americans should know that they are gaining an upper hand on the pandemic and, with a little patience, the outlook for summer is brightening.


Jeffrey Gerber, MD, PhD, MSCE, is the associate director for inpatient research activities for the Center for Pediatric Clinical Effectiveness at Children’s Hospital of Philadelphia, and is a co-author of PolicyLab’s Policy Review: Evidence and Guidance for In-person Schooling during the COVID-19 Pandemic.