In order to identify the most promising prevention opportunities, we need to have a clearer picture of the health behaviors of youth as they grow. As an epidemiologist whose research focuses on preventing heart disease, I am particularly interested in how common unhealthy behaviors are among kids and teens, whether youth engage in multiple unhealthy behaviors and whether there are differences by age.

To answer these questions, my colleagues and I turned to nationally representative data from more than 7,000 youth to look at five unhealthy behavior patterns:

We looked at behaviors alone and in combination, and at patterns across age groups.

How common are unhealthy behaviors among kids and teens?

We found that more than half of older children and teens exceeded recommendations for daily screen time (more than two hours for activities other than school/homework), which was the most common unhealthy behavior. Nearly as many had unhealthy overall diets. There are many ways to eat a healthy diet—for example, by eating lots of fruits and vegetables and limiting sugar-sweetened beverages. In our study, we defined “unhealthy diet” based on an overall score that reflected how closely children’s diets aligned to national recommendations for 13 different types of food. While screen time and unhealthy dietary patterns increased with age and were especially common among 16-19 year olds, they were not unique to teens. We also found that these patterns emerged very early in life, with more than one-third of 2-5 year olds already experiencing unhealthy diets and excessive screen time. 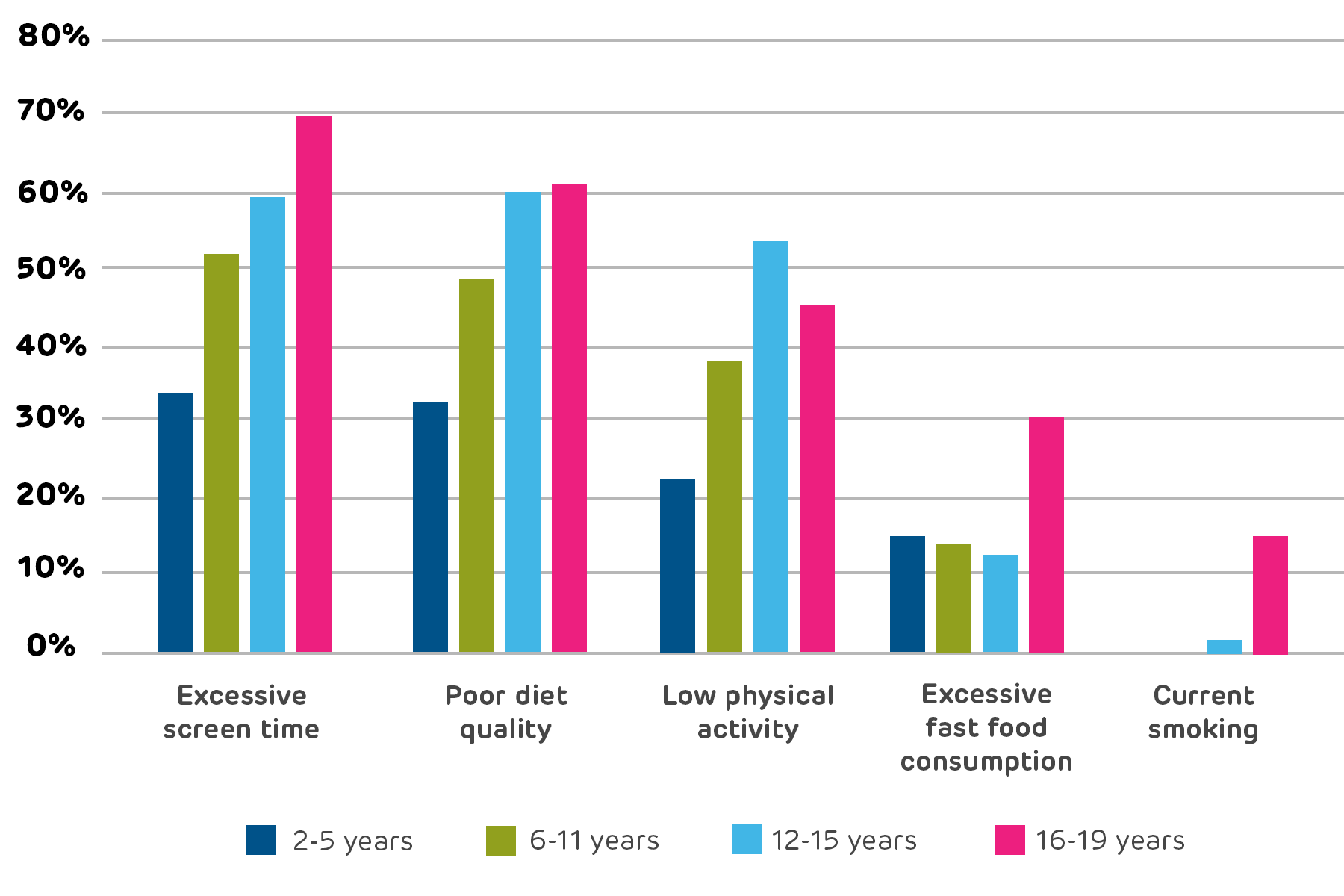 Additionally, more than half of teens did not meet national guidelines for physical activity, a pattern that was most pronounced in 12-15 year olds. Nearly one-third of 16-19 year olds reported eating fast food three or more times per week, with much lower percentages in younger age groups. And smoking was relatively uncommon—this is consistent with other national data indicating cigarette smoking has declined, while vaping has risen dramatically.

Although cigarette smoking was relatively uncommon among teens, almost all who did smoke also had other unhealthy behavior patterns. The data weren’t available to examine whether youth are combing vaping with other behaviors, but this will be an important area for future studies to investigate.

During which ages and stages can we intervene for maximum health impact?

Our findings have several implications for chronic disease prevention efforts focused on youth and offer insights on when interventions could have the largest impact.

First, clinical interventions and public health programs may benefit from focusing on screen time and diet in combination, since these were the most common unhealthy patterns across all age groups. Research has specifically identified screen time as an obesity risk factor, more so than other types of sedentary activities, because youth tend to consume more calories through unhealthy foods and beverages while spending time viewing screens.

Second, with low levels of physical activity being most common among 12-15 year olds, the transition from elementary to middle school is an important time period on which to focus. A recent study found that parent encouragement of physical activity, sports and spending time outdoors, and having community resources like social spaces and recreation facilities helped to prevent a decrease in children’s physical activity as they transitioned to middle school. Multi-level interventions that involve parents and link families to community resources are promising approaches to target this critical time period.

Third, our findings indicate fast food consumption and smoking are most important to focus on in older teens who may have more independence and disposable income that enable them to eat out frequently and obtain cigarettes. Helping teens quit smoking is extremely important to reduce their risk of future health problems, but most teen smokers also had at least one other unhealthy behavior pattern. Our results suggest that more comprehensive lifestyle interventions may be needed to support teen smokers to transition to healthy adulthood.

While the results of our study indicate that many children and teens have unhealthy behavior patterns, it’s important to note that these behaviors are modifiable. We can help youth boost their heart health and reduce future risk by encouraging individual and family-level behavior changes, like spending more time being active outdoors and learning to cook healthier meals, and through community partnerships to create healthy environments in which children can thrive. With a greater understanding of the scope of unhealthy behaviors in youth and age-related patterns, we can help clinicians and researchers develop programs that promote healthy behavior changes at key ages and transition periods to help kids and teens grow into healthy, productive adults.