The Role of Medicaid and CHIP is Changing for Working Families. Here’s How.

Over the past several years, working parents and caregivers have increasingly had to make a calculation—how can they fit health care coverage for themselves and their children into a limited budget? Health care costs continue to rise, they’re paying more for less care, and yet, their wages haven’t caught up.

In 2016, my colleagues and I found that parents with employer-sponsored insurance (ESI) were increasingly turning to public insurance to cover their kids through Medicaid and the Children’s Health Insurance Program (CHIP)—and we wanted to learn more. What about where parents worked? We knew that insurance costs tended to be much higher for employees of small businesses than for employees working for large companies or in the public sector. On average, workers at small businesses pay 39% more for family premiums than their counterparts at large firms.

So we decided to dig deeper—how did a parent’s employer type impact their kids’ likelihood of being covered by Medicaid and CHIP? Were employees at small businesses opting for public insurance for their kids at higher rates than parents working at larger companies? And how would this information help us continue to understand the health care issues facing families?

Enrollment on the Rise

We conducted a national study, published in Health Affairs, of working families and looked at their employers. We categorized employment by whether caregivers worked at a small private firm (less than 200 employees), a large private firm (more than 200 employees) or were employed in the public sector. We also looked at income levels, including families in the study who were making more than 100% of the federal poverty level (FPL).

What we saw was a concrete shift in how working families were insuring their children, and that they were more dependent on Medicaid and CHIP than ever before.

Moderate-income families (i.e., those making $48,500-$72,750 a year for a family of four) were feeling the pressure too, particularly when parents worked for small businesses. In 2008, 21% of children in these families were covered through public insurance. That number increased to 64% by 2016, a staggering 43 percentage point increase in public coverage over eight years.

What surprised us most, however, was what was happening with the population of low- and middle-income children whose parents worked at large companies. Of the 8.6 million children in our study with public insurance, more than 70% had a parent employed at a large, private firm. They represented the biggest driver of the increasing number of children in working families with public coverage. 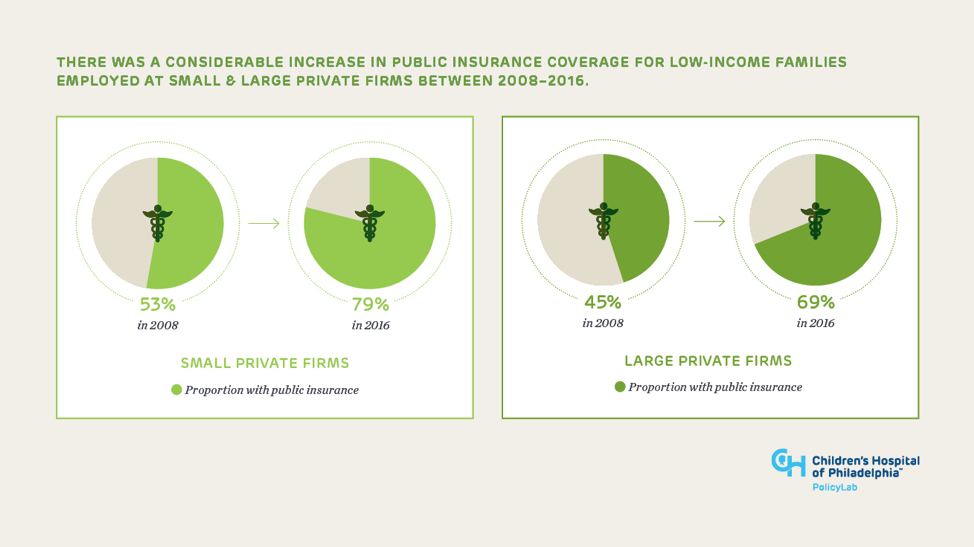 Medicaid and CHIP go well beyond providing a safety net for only the most vulnerable kids and teens and now additionally serve as a key structural support to millions of middle-class working families.

Protecting the Health of Working Families

Yet, as the role of these programs evolves, policy discussions have not kept up with what the research shows. At a time when we should be protecting and shoring up Medicaid and CHIP coverage, we’re instead seeing that children are losing insurance through these programs due to a variety of factors, including federal and state policies or efforts that are restricting or suppressing enrollment. According to recent data from the Georgetown Center for Children and Families, enrollment in public insurance declined nationally by more than 800,000 kids in 2018.

As policymakers debate the future of children’s health care coverage, it will be crucial to look to the data to understand why Medicaid and CHIP are vital to working parents. Several recent health reform proposals however, don’t line up with the reality of what families need to keep their children covered. Take Medicaid block grants for example, which would put pressure on states to reduce eligibility. Or a current proposal to change how poverty is calculated, which would mean millions of families could lose Medicaid or CHIP eligibility. These proposals ignore the continuing rise of health care costs and the trends we’re seeing that indicate the demand for public insurance in working families will only continue to grow in coming years.

The research is clear—the landscape of children’s coverage is changing under our feet. If we work together to support policies that acknowledge that change, we can ensure that families have access to quality care and coverage that allows them to thrive.


For more information on this study, check out this short video: