Helping to get kids safely back in school has been our goal since the outset of this project. So when our team made a difficult decision early in August to advise schools to exercise patience with reopening for in-school instruction until we saw what Labor Day weekend could bring, it came with much disappointment. But, we knew that those communities that waited the extra couple of weeks in the spring before reopening were rewarded with much quieter and safer summers. And we were also mindful of the likelihood that—following the third holiday weekend of summer and young adults returning to college—there was considerable risk that resurgence in late August could scuttle the safe reopening of schools after Labor Day.

As it turns out, our assumptions have proven accurate—while we hit a bumpy road at the end of summer, particularly when it comes to college campus outbreaks and vacationers returning home, this week we finally see evidence that transmission rates in many regions have stabilized or declined. The patience to reopen K-12 schools helped with this stabilization and we now have a window of opportunity to return many children and adolescents to the classroom for in-person instruction.

In the weeks leading up to and right after Labor Day, we witnessed the many challenges that college reopenings and returning vacationers brought to different regions of the U.S. College campuses worked quickly to quell outbreaks from students returning to campus before they seeded widespread community transmission. We noted last week the difficulty in deciphering whether an increase in cases in a county with a college campus was solely the result of outbreaks among students or also whether these outbreaks had impacted residents in adjacent communities.

To further assess this we have been evaluating the numbers in neighboring counties, where students were unlikely to be represented in the trends. Doing so allowed us to see that some of these college town outbreaks have been associated with increased transmission to adjacent counties. Yet, universities that opened when disease burden was low in their communities and/or that had strong quarantine and safety protocols on campus have fared better in containing transmission. We’ve seen the University of Notre Dame, Villanova University, Purdue University, the University of Michigan, the University of Vermont and Tulane University weather the first wave. 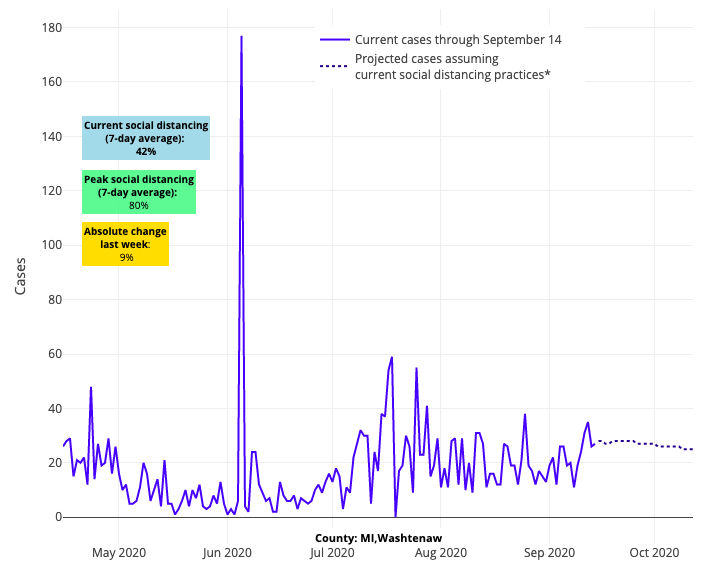 Above are the projections for Washtenaw County in Michigan.

These pressures were made even greater by returning vacationers, which likely inflated case counts in our recent forecasts for many areas of the Midwest, and certainly across the Mid-Atlantic.

This week, though, we can now more clearly see that the effects of the last weeks of summer are moving into the rearview mirror. This is most evident in the Midwest and Mid-Atlantic, where testing positivity is starting to drop and some regions that just two weeks ago looked concerning for K-12 school reopening are now moving into the range for more safely getting kids into the classroom. Chicago’s projections are better, even as Illinois as a whole has not altogether improved, and college outbreaks across Indiana are subsiding. Even areas of Minneapolis are forecasted to see reduced transmission risk over the next four weeks. 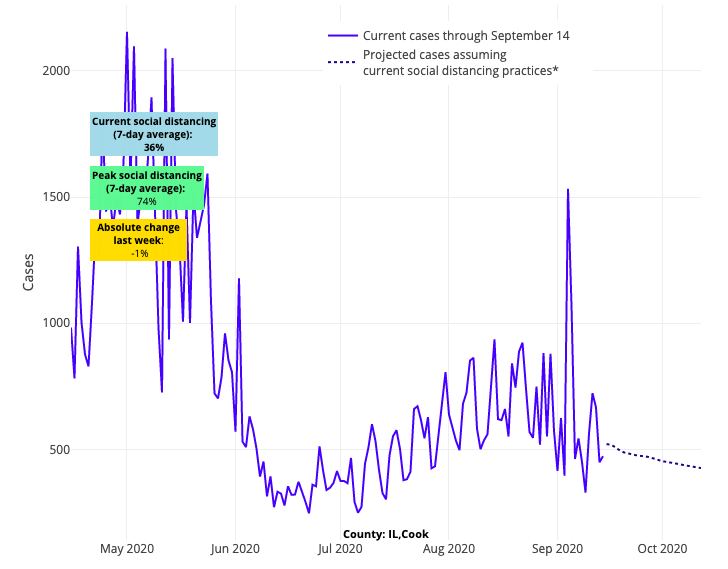 Above are the projections for Cook County in Illinois.

In the Mid-Atlantic, we are seeing clear evidence of stabilization again in Virginia, Maryland and southeastern Pennsylvania. (However, there are still some concerns for Wilmington, Del. and southern New Jersey, which will require monitoring.) 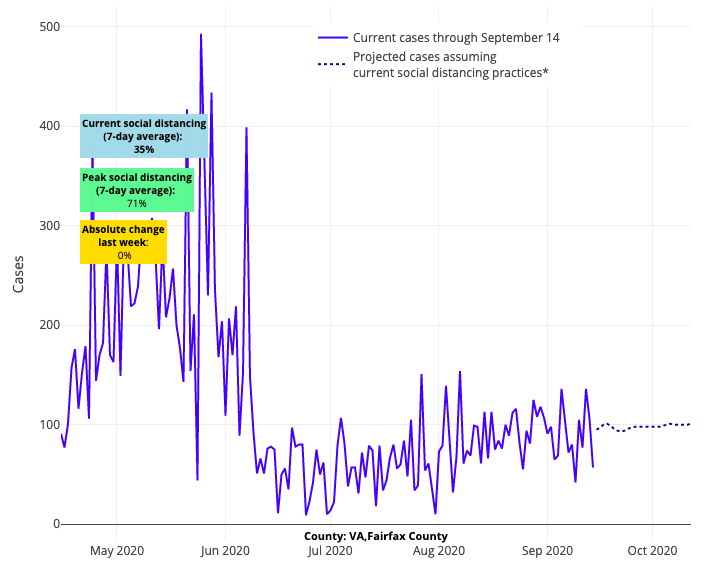 Above are the projections for Fairfax County in Virginia.

Adding to our optimism for early fall and the arrival of temperate weather is the fact that many areas of California, Florida and, dare we say, Texas are continuing to improve in our projections. Arizona’s forecasts are stable, and while we are not convinced that transmission risk has lowered in Tennessee, Georgia, and South Carolina, the overall trend is toward increasing stabilization in the South. Altogether, it feels like we are finally moving past the persistent summer wave of transmission.

Of course this is not the time to drop our guard as we know that colder weather is coming, which may enhance spread of this virus. It is notable that many of the areas with clear increasing positivity and case incidence trends are in the north. Our projections for much of Wisconsin, particularly its northern and western counties, are not improving, same with Anchorage, Alaska. And forecasts for Connecticut, Rhode Island and New Hampshire are slightly worse this week. Michigan also stands out for moving in the wrong direction in a number of areas. 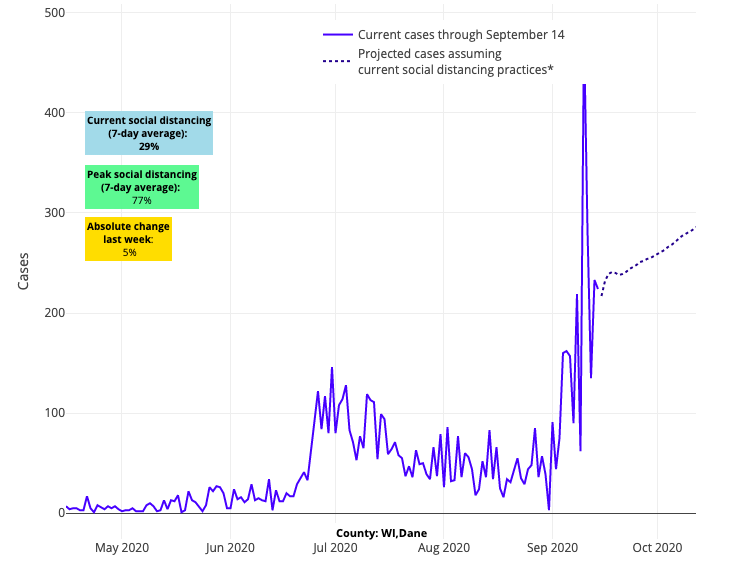 Above are the projections for Dane County in Wisconsin.

It’s been a while since we’ve had net good news. We have a sense that another wave is coming, but we are unsure of the timing or magnitude, even if we are convinced it will begin in our northern-most communities. Pandemic fatigue continues to plague us throughout the country, and the politicization of basic compacts around masking and reducing our gathering sizes weakens us. Just this week, a federal judge overturned the restrictions put in place by Pennsylvania’s Governor Tom Wolf, which have largely protected the Commonwealth better than most states in the country throughout this crisis. We risk faltering just at the time we are heading into a difficult winter where flu and COVID-19 have the potential to make this one of the worst seasons in our lifetimes.

But for now, an important window post-Labor Day is clearly opening in many areas, and we need to embrace good news when we see it. We hope that those who would seek to undermine this progress think twice about jeopardizing the school reopenings that are now expanding throughout the country. Many school districts that have waited out the first couple of weeks of September with virtual learning can now see a runway to returning children to the classroom and should solidify their safety and flu vaccination protocols in anticipation. Keeping students in school will require us to more consistently embrace the basic sacrifices of distancing and masking that can get us through this winter.

We are hopeful that public opinion has shifted enough in most areas to embrace this new normal, accepting the need to protect the most vulnerable among us and try to hunker down this fall with smaller groups of friends or family. Let’s hope that we don’t squander this second chance, and instead demonstrate the resolve that we are capable of.