COVID-19 Outlook: A Week of Travel and Uncertainty as a New Chapter Begins

Below are the top-line findings from our weekly COVID-Lab forecasting model update:

Above is the 7-day nationwide positivity rate graph by county.

As we consider these findings, we are cautiously optimistic that some of the stabilization in positivity rates that we are witnessing might be due to:

Of course, we must also recognize the real possibility that the deceleration of test positivity rates is the result of an increased number of asymptomatic individuals seeking testing in advance of the Thanksgiving holiday. As such, it’s important to consider positivity rates alongside the rise in case incidence we are reporting. These high rates heading into the holiday weekend provide the potential for significant transmission among family members gathering for Thanksgiving.

Importantly, not all areas are experiencing stabilizing test positivity and incidence rates this week. For example, testing positivity rates are growing in almost every county across New York. New Hampshire is much worse than it was a few weeks ago. In Pennsylvania, we anticipate case counts and hospitalization rates will continue to rise steeply over the next four weeks. Finally, our concern remains heightened for the Mid-Atlantic and Southeast, including the Carolinas, Tennessee and Georgia, where test positivity, case incidence and hospitalization rates are all on the rise. Lack of commitment to mitigation efforts during the Thanksgiving holiday weekend could lead to further escalation of these numbers well into December. 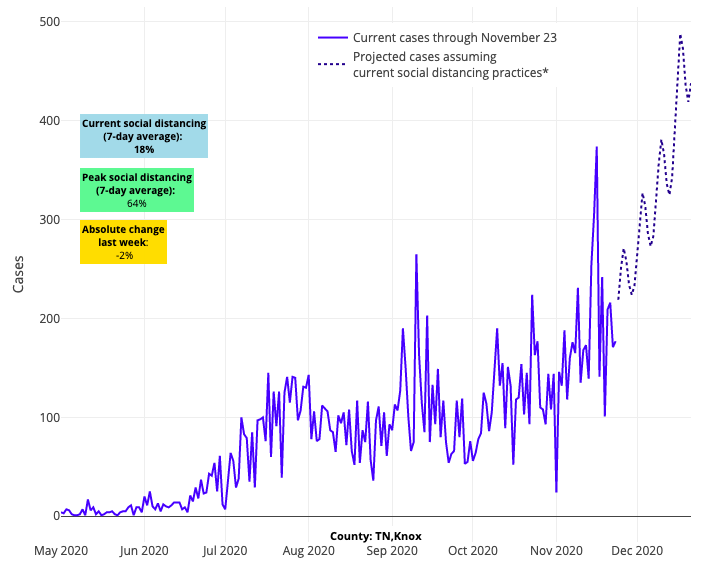 Above are the projections for Knox County (Nashville) in Tennessee.

As we emerge from the Thanksgiving holiday, there is risk for significant acceleration of the pandemic. However, as we have said before, this fate is not predetermined and we have some control over what is to come. We hope that your weekend will offer time for relaxation and enjoyment amidst these challenging times. We just urge that you limit your gathering sizes and take the necessary steps to protect the vulnerable members of your families. Certainly this is not the way we want to celebrate Thanksgiving, but if we can limit transmission this weekend we will keep our families strong for the many gatherings on the horizon in 2021.

From our team at PolicyLab, we wish you a happy and safe holiday weekend!