This has been one of the harder weeks for our COVID-Lab projections, given shifting responses by leaders and residents in many surging states are coinciding with testing delays and data dumps from national lab companies. That has made discerning clear patterns a little more challenging. Still, we added 228 new counties this week for a grand total of 747, giving us the most complete picture we’ve ever had of what the pandemic could look like across the U.S. over the next four weeks.

The additional counties include those with smaller populations, as few as 40,000 individuals (with a minimum population density of 250 people per square mile), and sustained outbreaks, which we define as at least 20 cases daily (on average) over one week. All states are now represented (with the addition of Anchorage, Alaska, Charleston, W.Va., Missoula, Mont., and Cheyenne, Wyo., among others), and we’ve added new college towns like Eugene, Ore., Columbia, Mo., and Athens, Ga. Finally, our models now include smaller hotspots like Augusta, Ga., and Corpus Christi Texas, and all counties along our southern coast from Louisiana to the Florida panhandle.

What we see is that these new counties share similar forecasts to their neighbors, matching some of the trends we have witnessed in recent weeks. As we reported last week, we see areas in Arizona and Northern California continuing to improve. Even some areas of Florida (Orlando!)  and South Carolina (Greenville, Myrtle Beach and Charleston) have better forecasts in our models, likely related to local ordinances around masking and distancing (especially if they are being enforced). San Antonio and El Paso, Texas are starting to make progress as well. However, in these hotspots, we’d prefer a couple of more weeks of data to be convinced that: 1) leaders and residents are sustaining a commitment to flattening their curves; 2) we see this consistently in our projections; and 3) reporting of tests are stabilizing. 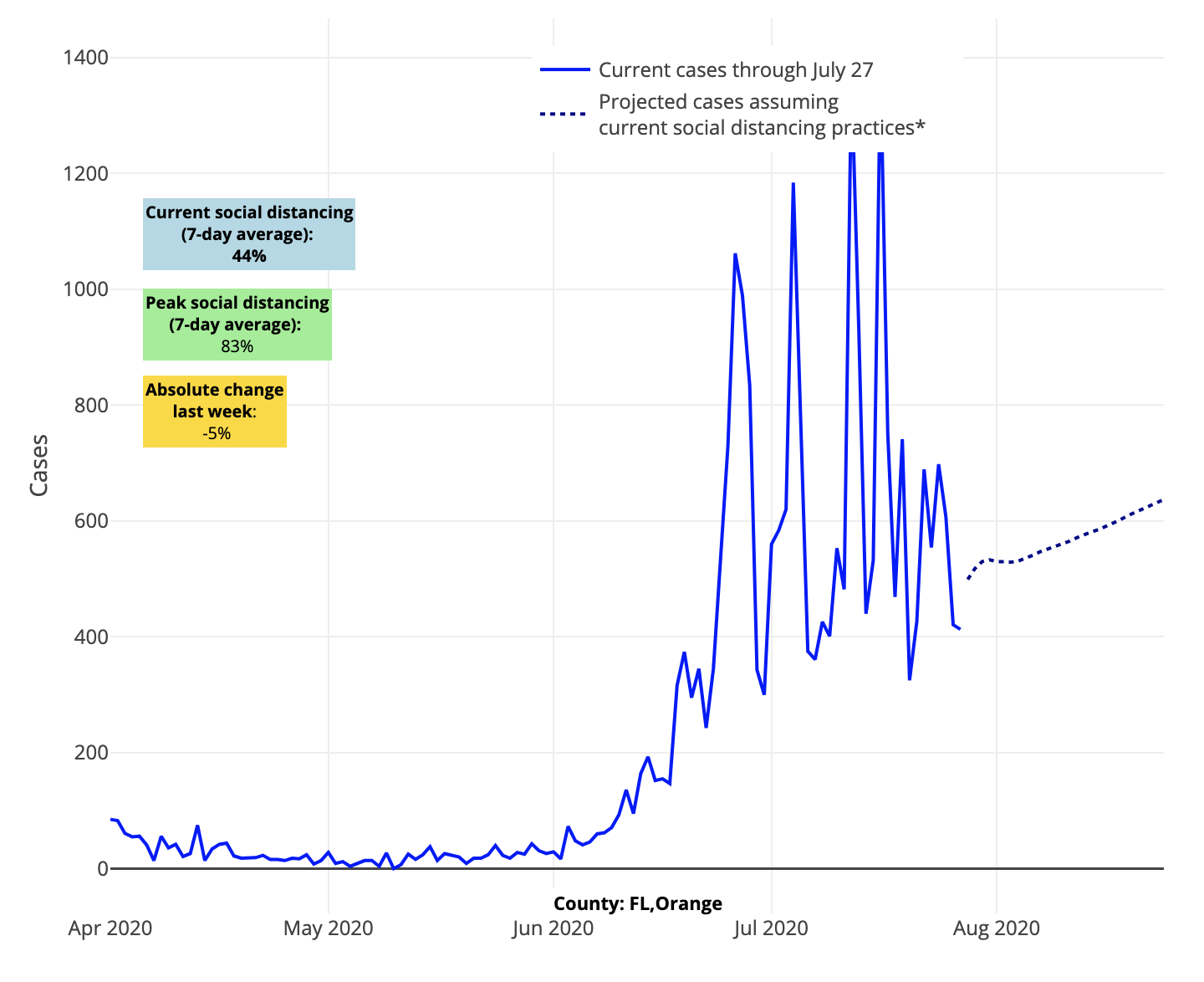 Above are the projections for Orange County in Florida.

Even with these long overdue signs of improvement, much risk for virus resurgence remains. In Florida, the southeast coastline, including Miami, remains troublesome, and counties along the panhandle represent the most quickly growing epidemic in the state. The Pacific Northwest continues to struggle in ways that are not entirely explained by our model, suggesting factors that we do not measure are exacerbating the epidemic in that region including, potentially, the political unrest in Portland. However, the resurgence risk extends to the metro areas of Washington, well into Idaho and up to Anchorage, Alaska. 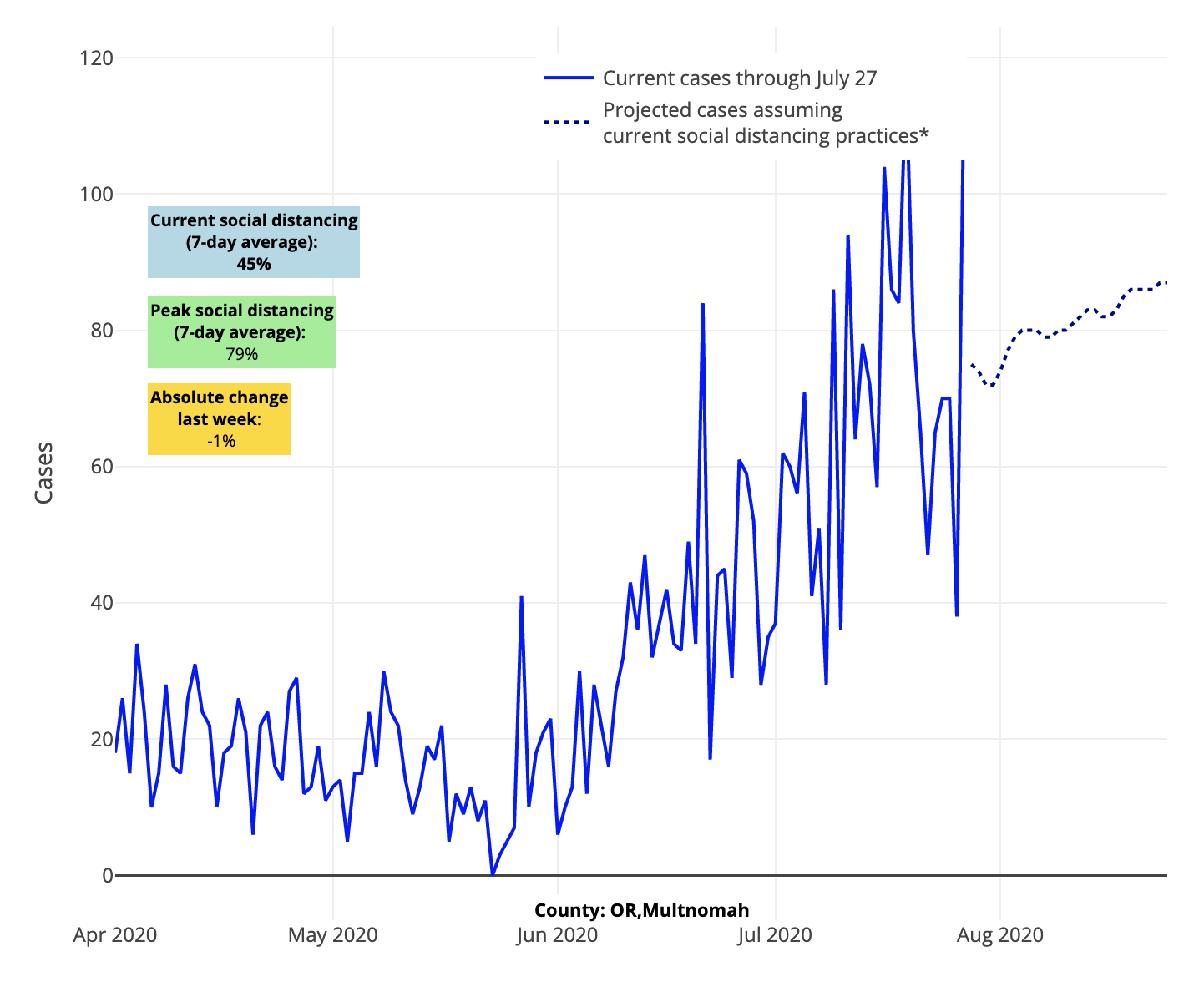 Above are the projections for Multnomah County in Oregon.

The next area of tremendous concern is the Midwest and Upper Midwest. It is clear now that from Indiana, through Ohio and into Kentucky and Missouri, as well as northward into Illinois and Michigan, there is substantial increased risk throughout the region. And an interesting pattern is emerging that we see in other worsening locations: even as some areas of these states appear to stabilize, risk is concentrating in the large cities and their collar counties. This includes Louisville, Ky., and St. Louis and Kansas City, Mo., which we’ve noted before, and now Milwaukee, Chicago, Indianapolis and Detroit. It makes you wonder whether the return of newly infected individuals from summer vacations is concentrating risk in their urban neighborhoods. That is a pattern to watch closely as we approach Labor Day, as we would not be surprised to see vacation areas ebb while city epidemics continue to grow. 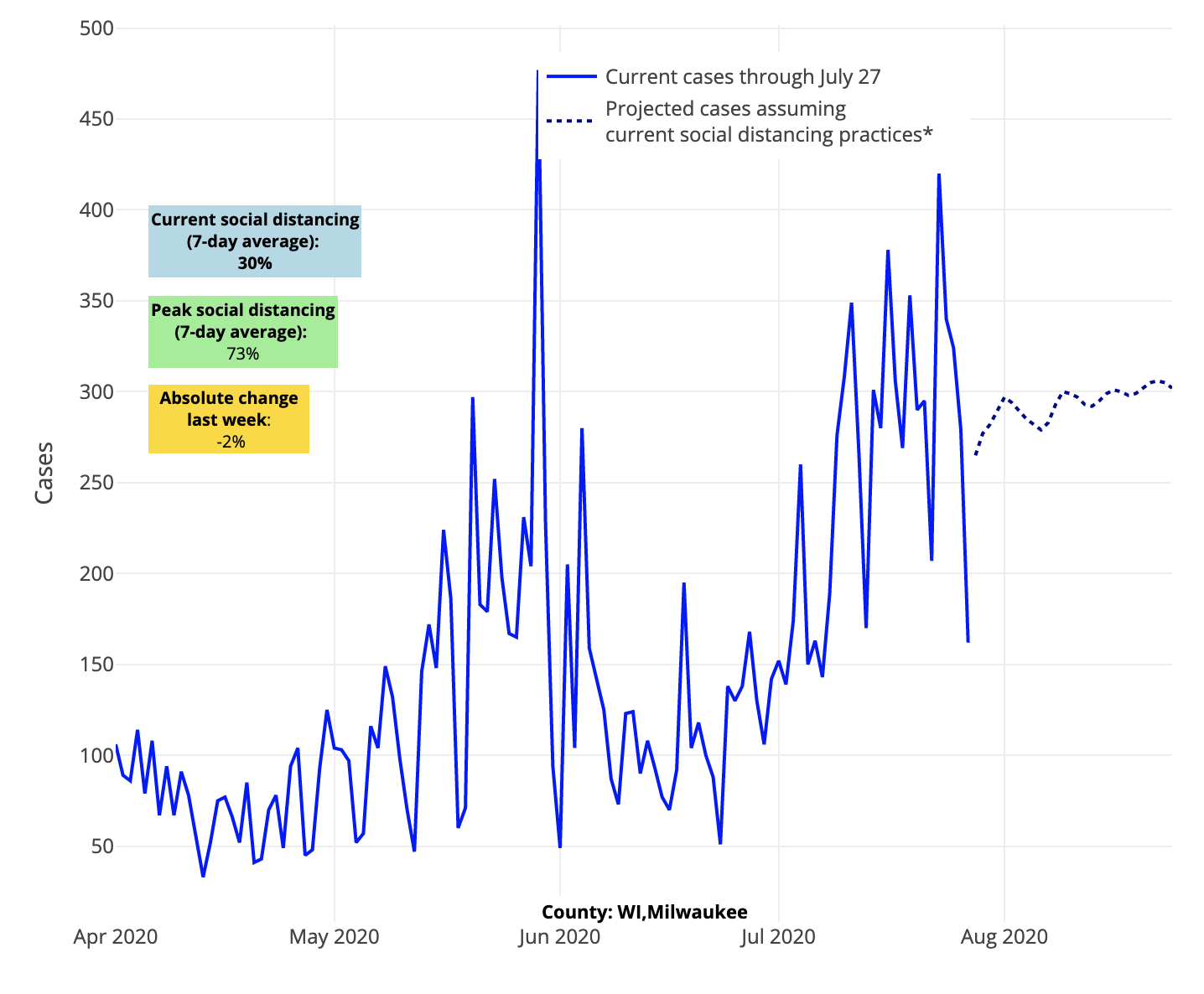 Above are the projections for Milwaukee County in Wisconsin.

Notably, resurgence risk continues to progress in the Northeast, concentrating around cities just like in the Midwest. Even with the testing delays and some reassuring test positivity rates in New York, the signal along the I-95 corridor into New England is still very strong. In our model, there was not a single county in Massachusetts with an average reproduction number below 1 these last two weeks, suggesting case counts could begin to climb in the near future. Our projections for counties along the New Jersey shore are substantially worse, and the Philadelphia region looks more and more like Baltimore, which we reported last week as having the highest rate of case growth of any major U.S. city today. And just to the south, the Washington, D.C. area has worsening projections this week, as does Richmond and Virginia Beach, Va.

As the epidemic returns to cities that have seen relatively low case counts since the spring, there will be much to learn. In particular, we will be following just how sustained these waves will be and to what degree college students returning confers new risk. Also, given that some areas, particularly in New York City, might have already reached exposure levels exceeding 25%-30% of residents in the spring, what happens there is critical to understanding whether theories of herd immunity have any relevance for our projections later in the fall. These theories have not yet been tested, but they are about to be, and it would be good news if the surges we are predicting as inevitable do not reach the dire levels of those in the South and Southwest.

Finally, this week, we revisited the scenario models we provided to the White House Coronavirus Task Force a couple of weeks ago to examine our largest counties and whether their “on-the-ground” response is shifting to adapt to any stronger restrictions (e.g., closing bars) they have put into place at the recommendation of the Task Force. Unfortunately, what these updated scenarios reveal is that despite recent policy moves, social distancing has not increased enough to substantially degrade cases in the near term in most counties. Our peer-reviewed publication issued last week revealed that significant and sustained social distancing is required to reduce high case counts, and even the Task Force mitigation measures require achieving as much as 50% social distancing in our models to achieve success. It is possible that we might have overestimated the amount of distancing that the new mitigation efforts would achieve, but more likely we are still seeing variable levels of enforcement and adherence to the new rules. 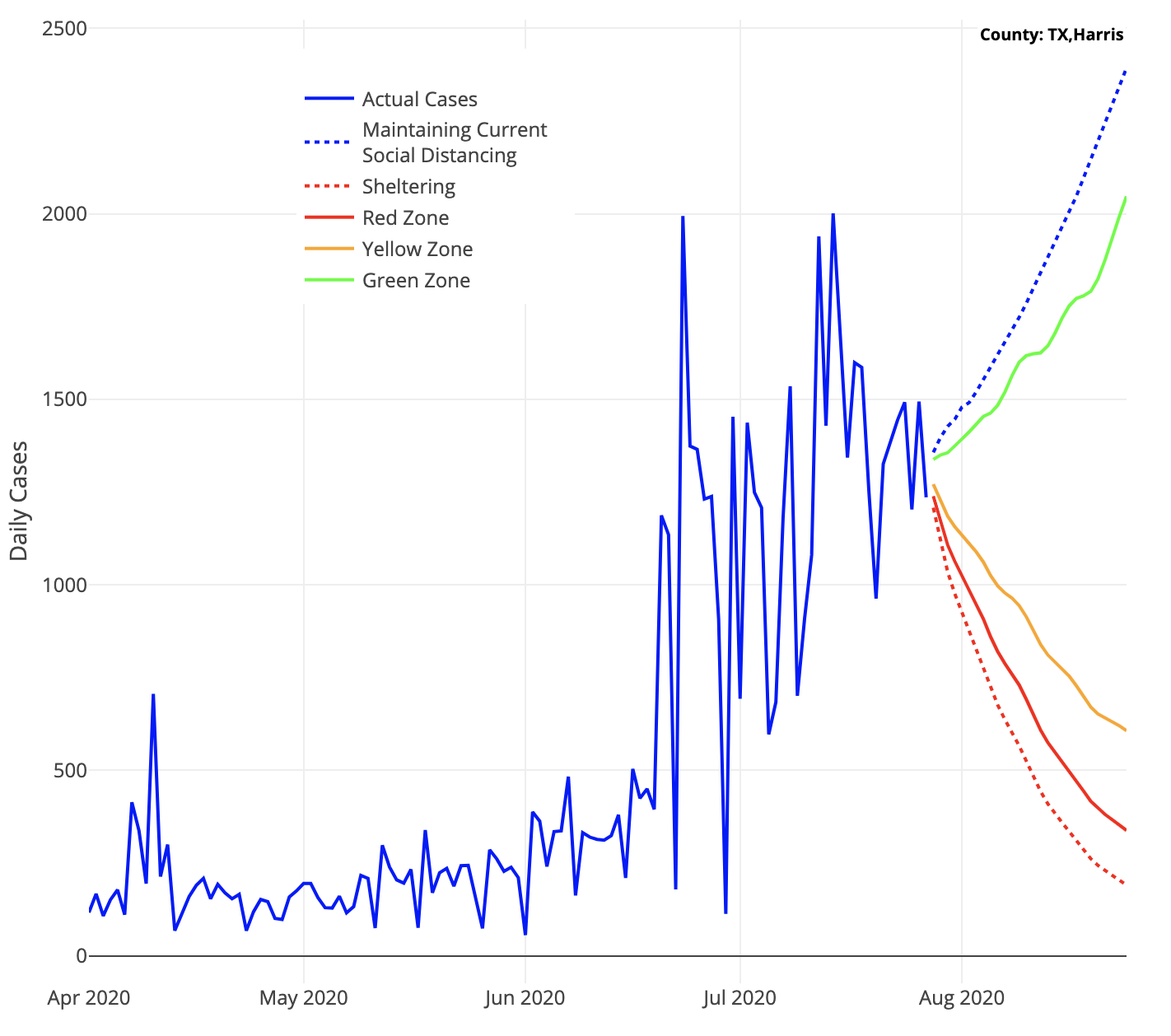 Above are the projected cases with roll-back scenarios for Harris County in Texas.

We are, therefore, very much on a shifting landscape this week. We remain somewhat optimistic that public opinion and behavior may be changing in many places, some of it inspired by outrage at our collective failure to successfully reopen schools. We also have a natural experiment about to unfold with the resurgence of cases in the Northeast and the uncertainty of herd immunity benefits. But there is added uncertainty as to whether we may regress, fatigued by the pandemic and its restrictions, and fail to muster a sustained effort at distancing and masking for the fall.

We can only hope that the glimmers of light in some areas of the country this week embolden us to shape a more united approach. And maybe, albeit unlikely, we will get some encouraging data out of the Northeast in the weeks to come. We shall see.