COVID-19 Outlook: Seasonality in the Spotlight as an Inflection Point Arrives

The beginning of November brings another inflection point in the COVID-19 pandemic. National incidence is no longer declining—and may increase in the coming weeks—and there is great variation in transmission at the regional level. This week’s forecasts from our COVID-Lab forecasting model provide a granular view of this changing landscape.

Here are this week’s national updates:

Updates on specific regions we’re watching closely with a focus on hospitalization numbers: 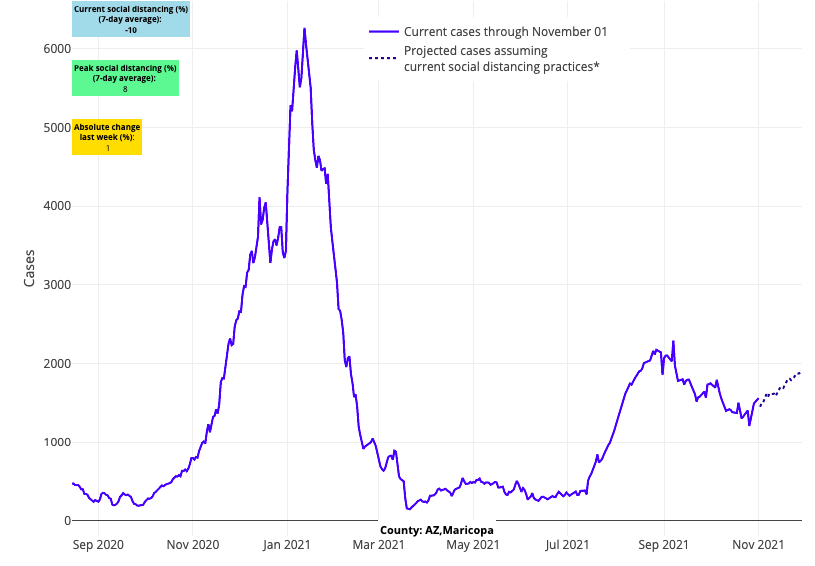 Above are the projections for Maricopa County in Arizona. 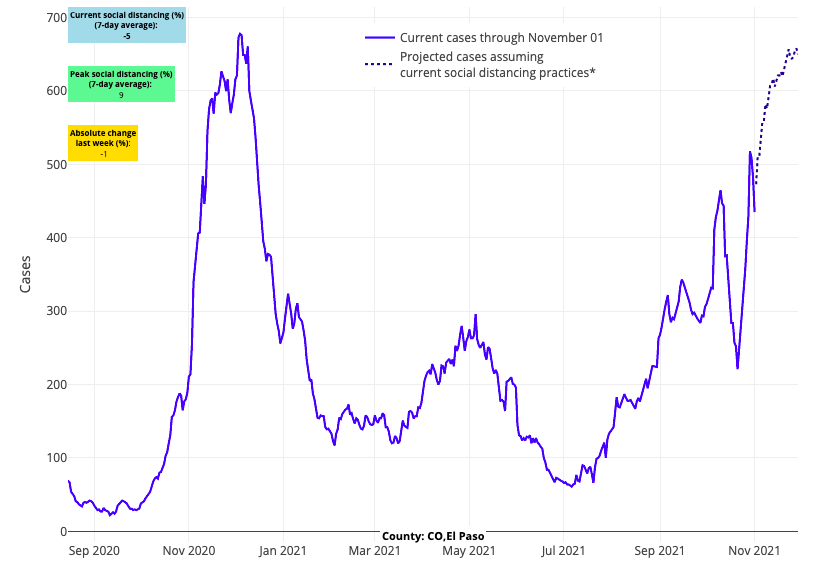 Above are the projections for El Paso County in Colorado. 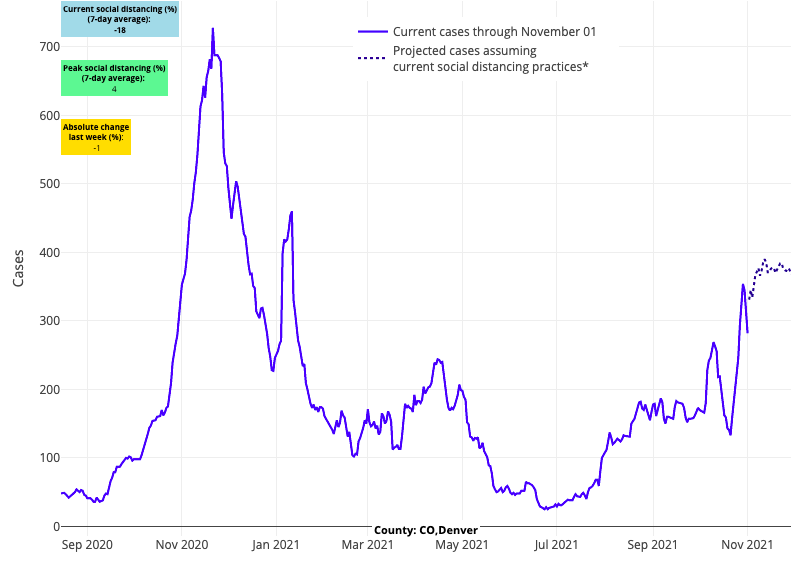 Above are the projections for Denver County in Colorado. 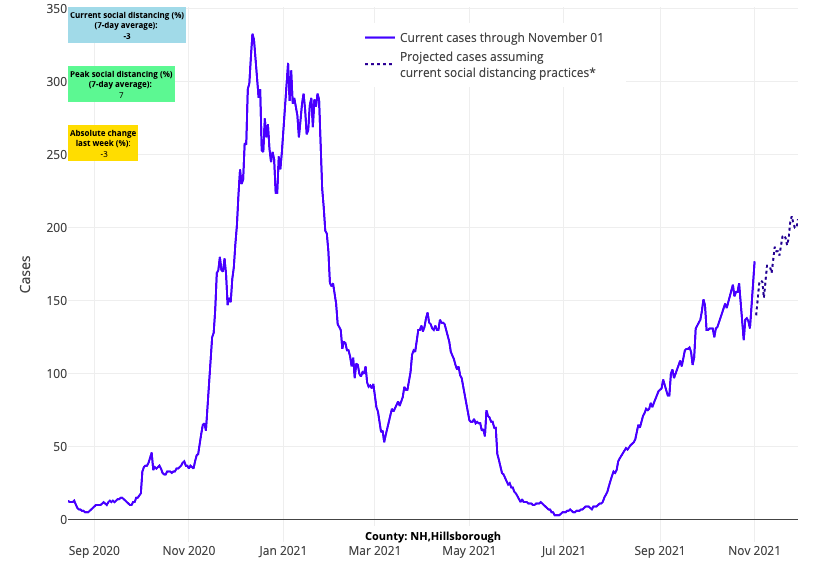 Above are the projections for Hillsborough County in New Hampshire.

Increases in case incidence that we have witnessed so far this fall are mostly concentrated in areas with poor vaccination rates, such as in communities across Alaska, Idaho, Michigan, Montana, Utah and Wyoming. There is growing concern that both colder weather and an increase in indoor gatherings, like what happened in some areas during the recent Halloween weekend, will further drive increases in COVID-19 transmission over the next couple of weeks.

Michigan, where 53% of all residents are fully vaccinated, can serve as a cautionary tale about the risks to poorly vaccinated regions. The state is currently at about 50% of its peak level of hospitalizations last winter, with one-quarter of all ICU beds occupied by COVID-19 patients. Our case incidence forecasts for Michigan counties, which have seen sharp increases in transmission, suggest sustained growth in cases over the next four weeks. Other poorly vaccinated midwestern states just to their south (e.g., Indiana and Ohio), which currently have stable incidence rates and hospitalizations, should consider that they may yet witness another challenging period this holiday season.

The data from areas with more optimal vaccination rates continue to provide guarded optimism  as they have, thus far, been able to navigate through this period without similar increases in case incidence or hospitalizations. However, we are likely at an inflection point for more highly vaccinated areas as we move into a season of holiday gatherings. The coming weeks will reveal whether other highly vaccinated regions in the West, Midwest, and Northeast can maintain steady incidence rates—and more importantly stable or declining hospitalizations—amidst the increasing pressure of even colder weather and more gatherings. We are starting to see rising test positivity across Wisconsin and Minnesota, as well as across the state of California. It will be important to see how these states evolve.

We must also recognize that “islands” of poorly vaccinated communities can exist within states or even counties that boast high vaccination rates. County-level data in California hints at this phenomenon. Counties across the Central Valley, where last year’s statewide resurgence originated, are seeing rising community transmission, in contrast to more stable or flat case incidence thus far in the highly vaccinated, adjacent urban communities of San Francisco and Los Angeles. We are seeing similar patterns in many other states, from the more rural areas surrounding Minneapolis, to communities north of New York City, to counties in central Pennsylvania that neighbor the Philadelphia region. While the relative stability of these cities leads us to believe the impacts this fall will be much less than last year, the addition of holiday travel, larger gatherings, and increasingly colder weather will test that hypothesis; we’ll be watching these areas closely over the coming weeks.

Interpreting models in the coming weeks

As we traverse through the fall and anticipate the winter, we are closely tracking three key metrics: 1) the magnitude of case incidence with which communities enter the season; 2) the duration and magnitude of accelerated transmission (as measured by reproduction numbers) before, during and after holiday periods; and 3) the trajectory of hospitalization numbers.

Of the three, case incidence as communities enter the holiday season is likely the most proximal signal of risk to a region. The 30% of all counties that have fallen below 100 weekly cases per 100,000 individuals and 6% of counties that have fallen below 50 weekly cases per 100,000 residents are likely to benefit from these lower basal rates of case incidence as they enter the holiday season. Such areas include much of the Southeast and Mid-Atlantic, as well as the more highly vaccinated metropolitan regions like San Francisco and New York City, which hover near or below 50 weekly cases per 100,000 residents. At the same time, the higher baseline case incidence across the North and Mountain States can be quickly magnified by an expected increase in indoor gatherings during the winter holidays.

As we enter the 2021 holiday season, we note more uncertainty in forecasts for what is to come as compared to last year. There are several reasons for this. First, population immunity—which incorporates vaccination and/or natural infection—is likely to act as a resistance during this holiday season in a much greater fashion than during prior holidays. We learned from July 4th that natural immunity as the delta wave moved through was not substantial enough to blunt the impact in more poorly vaccinated regions. But following those summer impacts, population immunity may now insulate less vaccinated regions in the South from further substantial impacts. For areas further north, accumulating immunity from natural infection and vaccination should blunt the magnitude and duration of any surge, even if colder weather or indoor gatherings can accelerate disease spread. The opposition of these forces will ultimately determine how substantial impacts will be across regions.

A final dash for vaccinations before the holidays

While many regions of the country are on much better footing than this time last year, we continue to urge all to remain vigilant and maximize vaccine coverage throughout this holiday season and prepare to respond to early signals that local transmission is rising again. We urge those planning family gatherings to counsel relatives who have not yet received vaccinations that there is still time to be vaccinated. A recent outstanding review by the Centers for Disease Control and Prevention (CDC) provides context for the role of natural immunity from infection vs. vaccination in abating future infection risk. While both have afforded protection against reinfection, the early data has revealed greater variability in durable immunity from natural infection and substantial protection from vaccination of previously infected individuals. This information can be vitally important to inform those who have been reluctant to be vaccinated about the benefits of doing so.

And finally, we want to underscore the value of vaccinating children in the coming weeks. The CDC on Tuesday endorsed the U.S. Food and Drug Administration (FDA) recommendation to extend emergency use authorization for the Pfizer-BioNTech vaccine to children ages 5 to 11.  We strongly encourage families to take advantage of this announcement and vaccinate their children ages 5 and older before the holiday season. As we have noted all along, while the risk of severe disease may be lower for children, it is not zero. Furthermore, children can transmit COVID-19 to more vulnerable family members at the holiday table who may be unvaccinated or unable to mount an effective immune response. The vaccines for younger children start this week. Line them up! Thanksgiving is just three weeks away.