We can finally breathe a little bit easier this week; it’s clear that we are moving beyond the peak of our national second wave. From a high of nearly 75,000 newly reported cases a day, we dropped again to less than 50,000 daily cases this past week, suggesting that tightening restrictions and abating summer travel may be starting to reverse the epidemic in many areas.

But even as our national numbers improve, many of our states still have a lot of work to do. Last week, we detected improvements that were beginning to sustain in areas of the Southwest, Texas, and even some parts of Florida and the Southeast. This occurred as resurgence risk increased in counties across the heartland, Midwest, mid-Atlantic and Northeast, and as New York City was still holding out despite the risk that was encircling it.

But even with these partial victories, the clock finally ran out on many school reopening decisions throughout the country. We entered this week with most large metro areas having reversed their in-school education plans for the new year, keeping everything online. Phoenix and Los Angeles were among the first to announce pivots to online learning and were soon followed by Birmingham, New Orleans, Miami, Washington, Philadelphia, Chicago, Indianapolis, Columbus, Ohio, and many more.

As outbreaks in summer camps occurred in communities with high transmission rates in Missouri and Georgia—and as increasing evidence revealed that symptomatic children, though fewer in number than adults, could transmit the virus—the decisions of these large urban school districts became inevitable. As these districts begin the school year online, they will observe the early evidence emerging from other areas that recklessly reopen (see Gwinnett County, Ga.), as well as those school districts that open in more favorable environments, like those in New York, which announced they were readying schools for in-person instruction after sustained improvements from spring to summer.

This week, it’s fair to say that progress continues, but many hotspots remain. We are now a few weeks out from a renewed effort by the White House Coronavirus Task Force to convince reticent governors to standardize restrictions around masking, bar closures and gathering size limitations. The number of states with masking mandates now stands at 33—and the return on investment from these initiatives is appearing. We see this most clearly in Louisiana where Gov. Bel Edwards’ orders appear to be stabilizing parishes throughout the state, hopefully saving New Orleans from a big surge before Labor Day. The reduction in transmission rates coincide directly with his policy moves. It also helped that Alabama Gov. Kay Ivey followed suit with her statewide masking orders. Outside of Mobile, we are seeing real progress for the first time around Birmingham and many other counties. 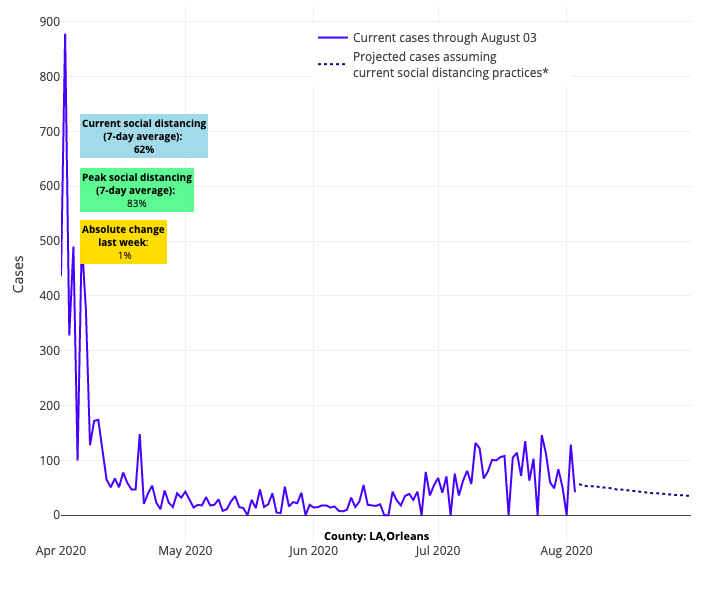 Above are the projections for Orleans Parish in Louisiana. 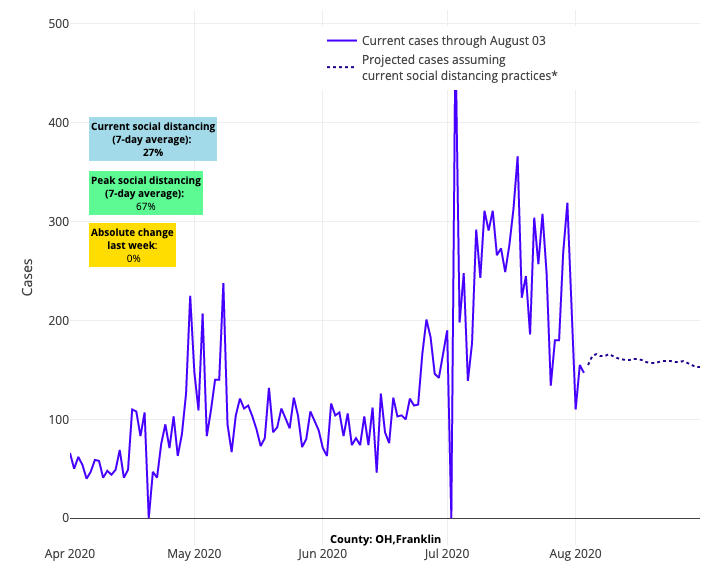 Above are the projections for Franklin County in Ohio.

Meanwhile, those states whose governors have held out on statewide mandates, leaving counties to fend for themselves, continue to see mixed success. Kansas City, St. Louis, Omaha, Memphis, Knoxville, Louisville, and Augusta, Ga., are among the many cities that are still surging, even as neighboring regions improve. Cities and counties that pursue restrictions often can't succeed alone. We see isolated successes in Jackson, Miss., and Atlanta, whose leaders are waging strong battles against the virus, but they are encircled by high-risk communities, making their success feel unsustainable. 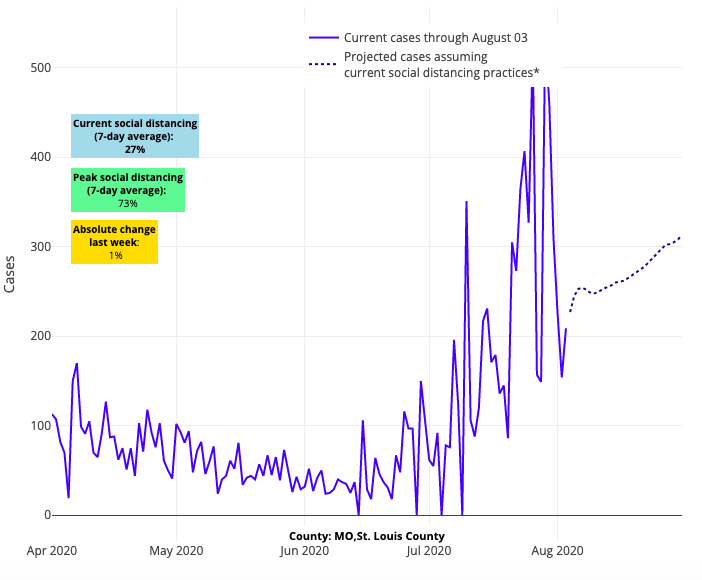 Above are the projections for St. Louis County in Missouri.

Two weeks ago, it was fair to say that the whole country, save the Northeast, was on fire. Now, as new mandates and restrictions begin to extinguish the epidemic in some areas, we are falling back into regional epicenters. And there are several: 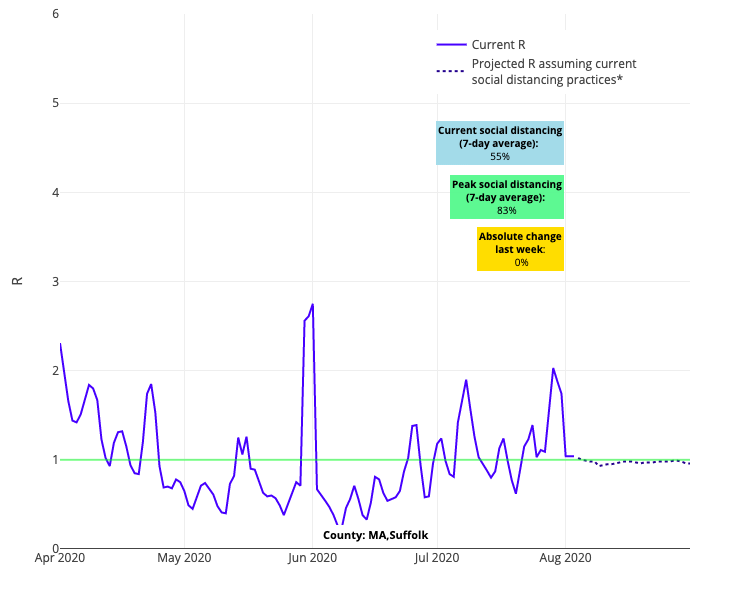 Above is the R estimation for Suffolk County in Massachusetts.

We also want to acknowledge the areas that are surprising us and providing hints to themes that will follow us into fall. First, our forecasts for Imperial California and many areas of Florida are improving, not entirely explained by increased social distancing. To a large degree, the improvements in Florida are likely the result of the sheer number of counties and cities that have over-ruled the governor and enforced new masking mandates, reaching some sort of critical threshold. Orlando has the best evidence in the state of that impact. But, it's at least worth raising whether improvements in these areas could be a sign of communities beginning to benefit from some element of herd immunity. Hard to say at this point, but might be worthwhile to do some serologic sampling in these areas to see if population seropositivity rates are more substantial than we might expect.

But aside from theoretical discussions, as more consistent restrictions around masking and social distancing clearly pay dividends, we can see the seeds of a national strategy for the fall emerging. The governors of Michigan and New York have continued to stay one step ahead of this virus, revealing that proactive management of this crisis can avert future risk. Other governors have taken notice and are now seeing the benefits of more balanced and consistent restrictions that allow for economic activity, but protect their communities from further risk.

The fact remains that we are learning as we go, and our only hope is that those leaders still holding out from operationalizing the Task Force’s recommendations will finally come around and help our country unify in strategy before the colder weather months ahead. And therein lies our optimism as we try to emerge from a difficult summer.