COVID-19 Outlook: A Pivotal Moment in the U.S. Fight Against Coronavirus

We are at a pivotal moment in our reopenings following the arrival and resurgence of the COVID-19 pandemic. Last week, our team released our most worrisome forecasts to date, particularly in areas throughout Arizona, Texas and Florida. We also revealed that other communities were quickly displaying the patterns that these states had shown just several weeks earlier, including Las Vegas, Tulsa, Little Rock, Ark., Columbia, S.C., and Salt Lake City.

Unfortunately, this week things only got worse. The sheer number of counties with increasing transmission risk in our four-week projections is overwhelming states and now engulfing their neighbors, like Ohio, Georgia and California, which previously had fared ok in our projections. Our earlier warnings about Kansas City and New Orleans look more pressing every day as new areas of risk emerge, such as St Louis. 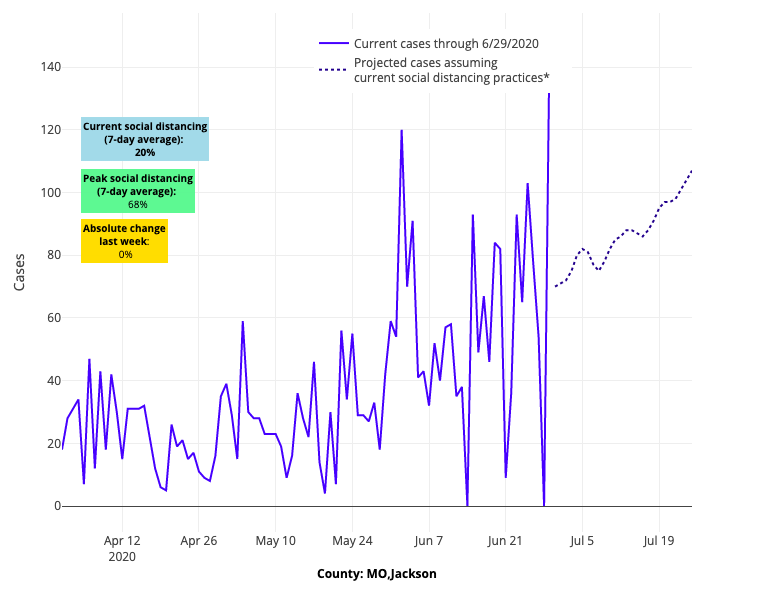 Above are the projections for Jackson County in Missouri.

What’s most concerning is that older areas of concern—including Chicago, Minneapolis, Philadelphia and Baltimore—are once again showing rising risk as the epidemic creeps north. Travel is certainly a huge driving factor. We see spread along I-80 between central Illinois and Iowa, as well as along the I-90 corridor across upstate New York. 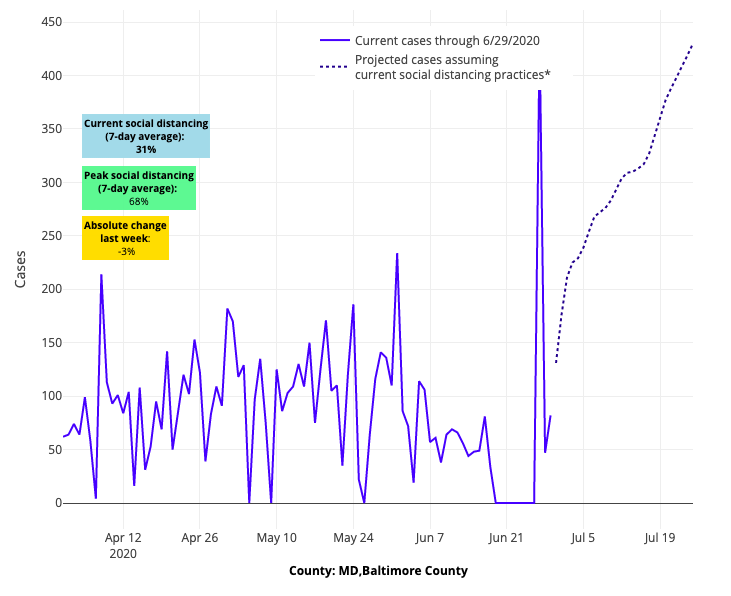 Above are the projections for Baltimore County in Maryland.

But travel alone cannot explain the worsening forecasts. We don’t know whether it is fatigue and/or weak enforcement of city or state masking mandates, but our vigilance to properly protecting ourselves and those around us during a pandemic is eroding at a time when we need it most. And it’s not just the big cities—college towns across the country, from Knoxville, Tenn., to Lansing, Mich., are joining the list, threatening the reopening of schools that seemed so possible just a month ago. 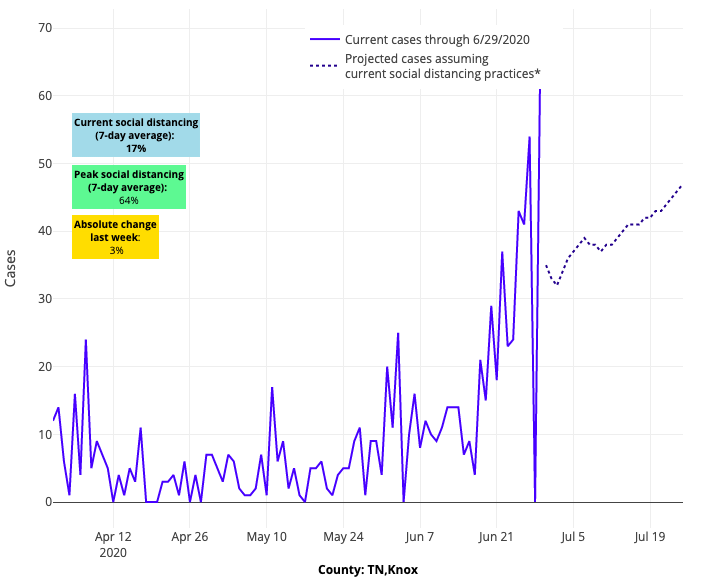 Above are the projections for Knox County in Tennessee.

The fact of the matter is this is a moment of reckoning. Dr. Fauci’s warning yesterday that we could see more than 100,000 cases a day in this country is a very real possibility when we look at the aggregated risk in our forecasts. What we fear most is that we may soon see depleted health care resources in many American cities.

If we ever needed a national strategy, including a nationwide masking mandate in public locations, it is right now.

Otherwise, we will be reduced to spectators in an uncontrolled wave that is sweeping across America—further threatening the economy and thousands of lives.

It makes us think further about a question we got a lot after releasing last week’s projections: Was it possible that Maricopa County, Ariz., could have exceeded 20,000 cases a day by mid-July, as our model forecasted, if the local authorities had not responded in the last couple of weeks by instituting masking requirements and scaling back restaurant and bar reopenings? We received similar questions for Harris County, Texas, where we forecasted a potential to reach 4,000 daily cases by July 18, and for Miami, which we projected last week could reach 2,500 cases a day by the same date. 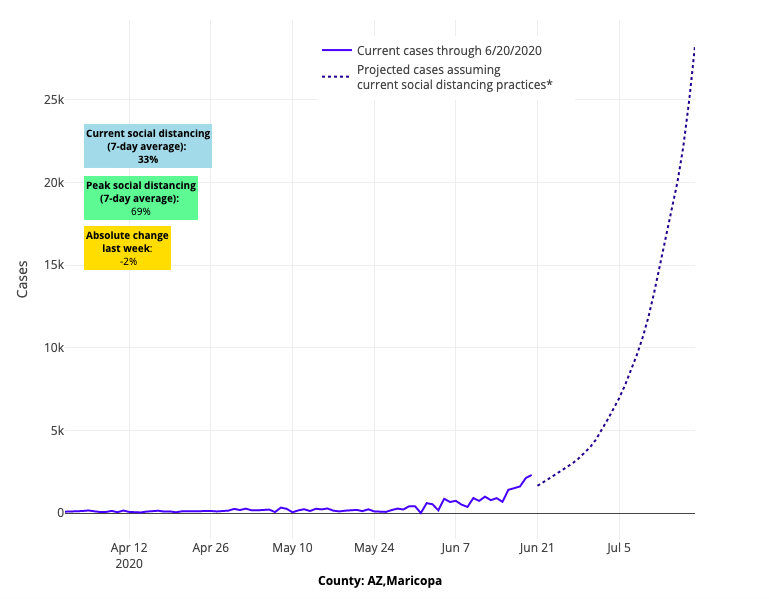 Above are the projections for Maricopa County in Arizona from June 24.

As we mentioned in our blog post last week, we do a lot of work behind the scenes to validate our models and see how accurate our projections are week to week. So, up until last week, we can tell you that our slopes had been spot on for these growing epicenters, and if anything, our case estimates were consistently low by a couple hundred cases a day.

We also looked back at our data from the weeks preceding this spike in cases in Maricopa County and saw that the reproduction numbers (Rs) were consistently near 2. This means that for each person infected, two more were likely to get COVID-19, easily explaining the rapid doubling in cases that led to more than 3,000 new infections a day. If those Rs were to sustain, just three doublings pushes the daily count over 20,000. So, in the end, we once again trusted our models and released the estimates; people needed to know what unmitigated growth might produce.

That said, it is still very much a relevant question how quickly these locations, which were exceeding thousands of cases a day, might deflect their current projected trajectories. Or, are they beyond the point of quickly controlling the epidemic?

We’re seeking to answer this question by pursuing sensitivity analyses for our forecasts in Phoenix, Houston and Miami. We’ll be looking at whether adding cumulative incidence (or the total number of people infected relative to the population in the area) might create a ceiling effect of enough individuals who are susceptible from infection being removed from the at-risk population during the peak of an epidemic. We’ll also be modeling state-level masking policies across the 519 counties we’re following to detect whether those requirements might also influence future forecasts.

For now, though, our weekly update is a sobering assessment of the country entering the month of July. Our national collective response is failing, and it is fair to say that we are now witnessing a second wave. We’re beginning to question how well the areas that are being vigilant with distancing and personal protection can succeed if their neighboring states are not following suit. How well can North Carolina, for example, continue to mitigate transmission if South Carolina and Florida remain slow-footed in their response? We may quickly learn that while state-based flexibility was absolutely necessary to combat this epidemic across such a large country, a national response was also needed to assure a standardized approach to masking and distancing that would protect neighboring communities as economies reopened and travel resumed.

We’ll be back next week, hoping that some of the delayed but important public responses we are seeing might begin to roll back the crisis that is rapidly unfolding.