Increases in COVID-19 case incidence continue this week in many counties, just in advance of the Christmas and New Year’s holidays. What’s more, the emergence of the omicron variant in some regions of the country adds a level of uncertainty as families prepare to travel and gather in the next two weeks. Following an analysis of our latest COVID-Lab forecasting models, our blog post this week highlights again the variable nature of regional experiences and examines the trajectories for the coming holiday weeks in the context of emerging data about omicron.

Here are the regional updates: 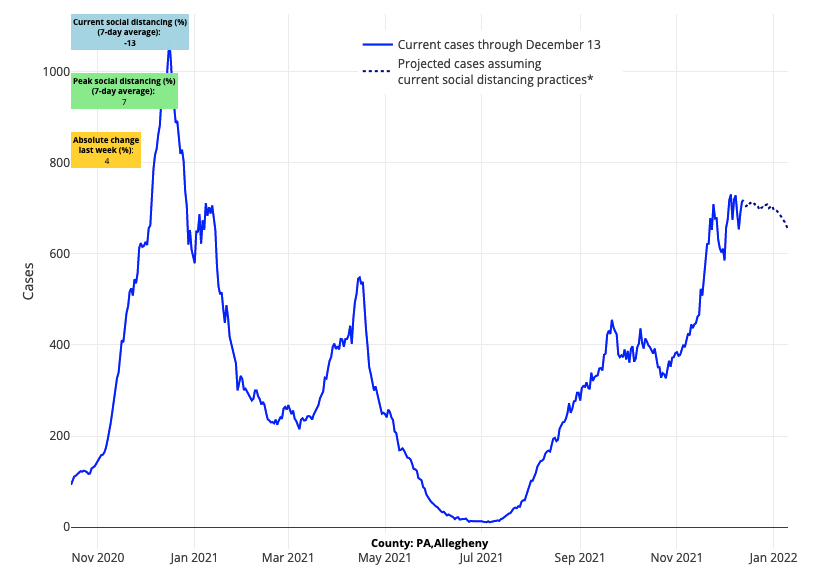 Above are the projections for Allegheny County in Pennsylvania. 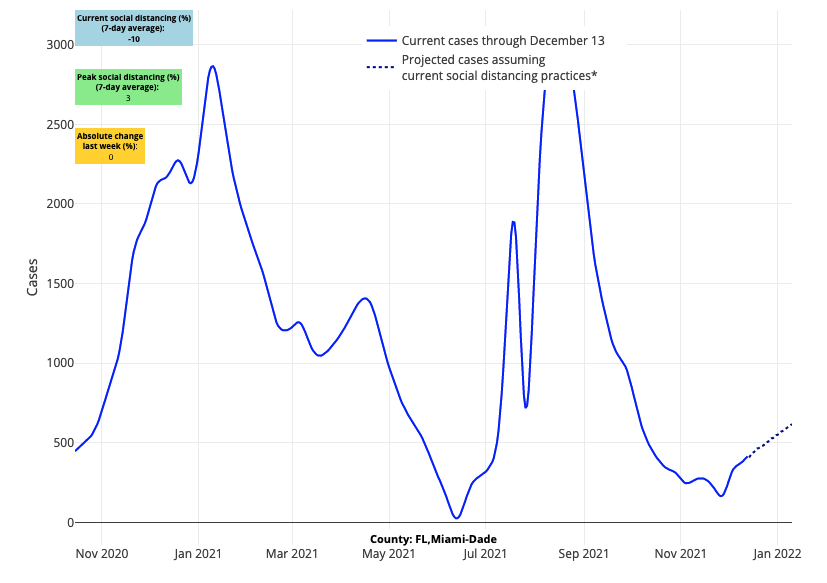 This week’s models reveal the continued complexity of this pandemic, with some regions improving but others worsening before the coming holidays. Still, our projections show that there are an increasing number of counties moving toward peak transmission.

The Midwest has broadly improved over the last two weeks, even as hospitalizations remain high. Our models forecast declines in case incidence over much of this region before the end of the year. Increasing travel and gatherings around Christmas and New Year’s may introduce new accelerated transmission risk that might threaten this declining trajectory, but as we’ve witnessed in Colorado recently, when a region moves past peak, it can be resilient to a subsequent resurgence. This is welcome news for states like Michigan that have neared a hospital census of 60 per 100,000 residents and eclipsed 75 deaths per day.

Recovery is also likely to expand soon to other states experiencing significant resurgence right now, including Illinois, Indiana, Ohio and Pennsylvania. This region of the I-80 corridor has arguably had the most difficult experience during this seasonal resurgence, but our projections show declining case incidence over the next four weeks across Indiana, Ohio and into western Pennsylvania. Even as these areas near peak case incidence, we should not understate the potential for sustained high hospital census in excess of 40 patients per 100,000 residents, particularly in localities with lower vaccination rates.

The areas of greatest concern for the coming weeks are those that continue to see accelerating case incidence and test positivity in advance of the holidays—New England down the I-95 corridor to the Mid-Atlantic. In this part of the country, which has seen rapid growth in hospitalizations, our models project continued increases in case incidence through Christmas. Zooming in, while risk has begun to abate in more northern and rural areas of this region, where reproduction numbers have declined toward or below 1, the large urban metropolitan areas have not followed suit and are demonstrating some of the highest reproduction numbers in the country. We are also increasingly attentive now to the Southeast, where case incidence has begun to grow quickly again; hospitalization rates have not yet reached those of northern and western states, but increased hospital admissions may be on the horizon for this region. 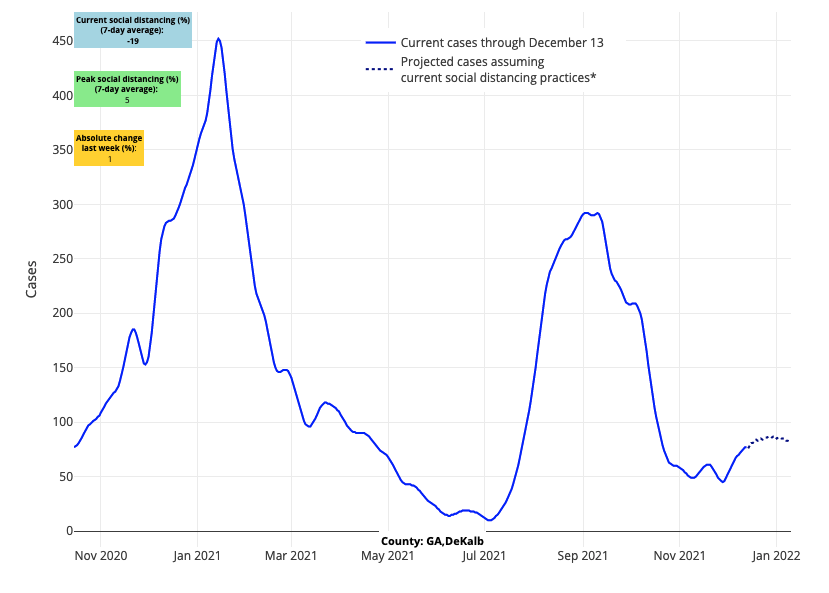 Above are the projections for DeKalb County in Georgia.

How will omicron’s arrival in the U.S. impact this winter resurgence?

The cautious optimism noted above for some regions may be undermined by the increasing presence of omicron in the U.S. Omicron has become the dominant strain of SARS-CoV-2 in Europe and South Africa, leading to significant discussion of what this will mean for our country’s experience this winter.

The fact is it is still too early to estimate how omicron may alter the epidemiologic curve of a specific region. Will omicron accelerate case numbers in areas with already rising case incidence? Will it reverse improvements in regions that have begun to recover from recent resurgent peaks? The answers to these questions are still not available, but this week’s report of a significant outbreak of omicron among mostly vaccinated students at Cornell University (where 97% of the campus is vaccinated) underscores the potential for omicron to drive transmission within a highly vaccinated population existing in a community already experiencing increased case incidence from the delta variant.

Fortunately, the testing platforms that inform the data we use in our models detect the omicron variant, so our projections will reflect increasing incidence driven by this variant should it be present in the counties we monitor. We will watch closely in the coming weeks if other localities have a similar experience to that of Cornell University as omicron is introduced. We suspect that omicron is already impacting areas experiencing increasing case incidence, such as communities in the Northeast and perhaps in areas out West; our forecasts will, therefore, capture the experience of these regions as omicron grows in proportion to the delta variant.

In areas where we are projecting improvements, such as the Midwest, our forecasts need to come with the asterisk as we don’t yet know if, when, or how omicron can re-aggravate a region that is beginning to improve from a recent peak. We will be watching our models for unexpected changes in trends in case incidence and hospitalizations in the coming weeks. Many predictions are being offered, but ultimately local-area epidemiologic data on PCR positivity and case incidence (like we use in our models) will tell us the truth—we must remain grounded in these data as they become available.

We would also note, with some optimism, that early reports from other areas suggest that omicron is less likely to cause severe disease. The Cornell University outbreak, from which infections were universally mild, may equally be interpreted as demonstrating the benefit of the vaccine for reducing severe disease, as well as demonstrating that this variant may also be less severe. However, because the milder spectrum of disease at Cornell cannot be generalized to older or more vulnerable Americans, it will be important for us to juxtapose case incidence and test positivity data with hospitalization data. If omicron is less likely to cause severe disease but becomes the driver of case incidence in the coming months across all age groups, we might expect to see high case incidence without an accompanying high hospitalization rate. For this reason, we are closely comparing case incidence now with hospitalization rates per population within counties. In the coming weeks, our data and blog posts will be more informed by this metric as the burden on hospitals will become far more important in assessing the gravity of this stage of the pandemic.

Regardless of which variant is fueling a given stage of this pandemic, no variant (even the most transmissible) can spread in a vacuum. This virus requires an engine, whose components are defined by behaviors of exposed and unexposed individuals and environmental patterns that serve to establish scenarios (i.e., close proximity of larger groups indoors) that allow the virus to efficiently spread. So, while we are concerned about omicron and what it might bring, we are hopeful that after holiday gatherings subside, increased booster dosing will allow us to welcome a period of declining incidence for many areas, much like last year.