COVID-19 Outlook: Navigating Another Holiday Season of the COVID-19 Pandemic

As we experienced last year, local case incidence data can become highly unreliable in the week following a major holiday like Thanksgiving or Christmas. The noise in the data—as people move about the country and testing slows around the holiday—renders this week’s forecasting models for case incidence and reproduction numbers unreliable.

During this period, however, PCR testing positivity data—which measure the proportion of daily central lab PCR tests that are positive within a county—remain more stable as they are based on visits to health care facilities. Trends in PCR test positivity also track closely with emergency department utilization, where many of these tests occur, and which itself is a leading indicator for hospital admissions. So, even as we forego sharing county-level projections through our COVID-Lab forecasting model this week, we will provide an interpretation of regional trends, drawing from state and regional hospital data and PCR test positivity rates across the counties included in our model.

Here are this week’s updates: 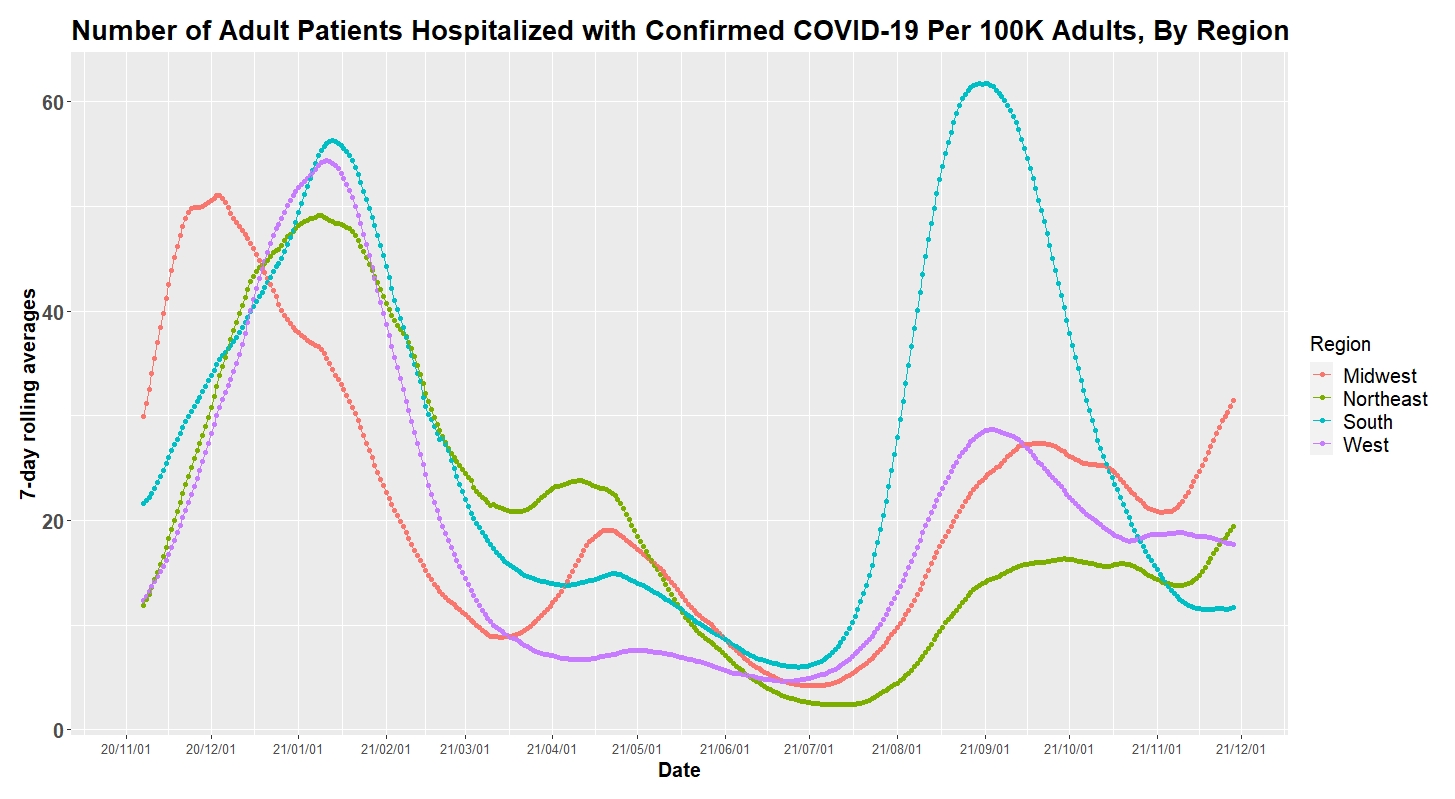 The above graph shows number of patients hospitalized with confirmed COVID-19 per 100,000 adults by region.

Over the next two weeks, we should have greater insight into the magnitude of holiday resurgence this year, once local testing and case incidence data normalize following Thanksgiving weekend. Despite an absence of reliable case incidence data over the last week, we are fortunate to have other leading indicators—including regional PCR test positivity, as well as emergency department visits, hospital admissions and census trends—that can still provide meaningful analysis to build upon trends we had observed before Thanksgiving.

Such an analysis reveals a growing geographic region of risk that now extends well into the Heartland, South and Mid-Atlantic. We are even seeing increasing test positivity and growth in emergency department visits again along the southeastern coastline across to the metropolitan areas of Texas. On the bright side, we are also seeing recovery in the West, suggesting that further increases to national case incidence and hospitalizations are likely to be concentrated in areas east of the Rocky Mountains this holiday season. That we were seeing test positivity improving in Minnesota, Colorado, and New Mexico adds confidence that the region is likely to move past their peaks in case incidence during the first half of December.

In the coming weeks, we will be focusing most on impacts in the Midwest, Northeast, Mid-Atlantic and poorly vaccinated regions of the South. Michigan is the state most in crisis right now, but we would also sound the alarm for counties across Indiana, Ohio, and Western Pennsylvania, which are seeing explosive growth in PCR test positivity and hospitalizations. Trends in Kentucky, Tennessee, North Carolina, and Georgia are also worsening, and lower vaccination rates in these states will likely lead to a difficult December. Finally, we anticipate hospitalizations to increase across the Northeast and Mid-Atlantic in the coming weeks, but test positivity increases are trailing those of the Midwest, suggesting that higher vaccination rates may shield the more highly vaccinated metropolitan areas in these regions from significant increases in hospitalizations.

New Uncertainty with the Omicron Variant

Before the end of November, reports of a new variant of concern, isolated in South Africa, led to abrupt restrictions on international travel from the region, as well as new anxieties for a fatigued public that has been long ready to move toward better days. The presence of the omicron variant in South Africa raises concerns because it has been temporally associated with regional resurgence in that part of the world. Omicron has been noted to have many more mutations, however, the implications of these mutations on transmission, disease severity and vaccine effectiveness are not yet known.

Throughout this pandemic, there has been a rush to project the potential impact of a new variant before enough details are available. Often these projections discount the fact that regardless of the variant(s) circulating at any given time, environmental and behavioral factors remain the primary drivers of infection transmission and subsequent risk for severe disease. Our entire modeling approach is based on the fundamental premise that the magnitude of viral spread and morbidity is most influenced by human behaviors (e.g., poor vaccination coverage, limited mask use in large indoor gatherings) and environmental factors (e.g., colder temperatures that drive people indoors).

Modifiable human behaviors, such as mask use and social distancing, alongside optimization of vaccine rates have been and will remain our most effective mitigation strategies. As such, it is more likely that the epidemiology of this pandemic during this holiday season, and any subsequent resurgence of disease, will be dictated by these factors rather than the emergence of a new variant. It remains possible that a variant will evolve that can completely evade protection from vaccine or natural infection, necessitating judicious surveillance measures, but this possibility remains small.

Omicron, which was just detected for the first time in the U.S., may account for a rising proportion of cases in the United States in the late winter and spring of 2022, but it does not guarantee that the trends in case incidence during this time period will be any different than what would happen if delta remained the dominant variant. Last year’s improvements after New Year’s Day are likely a stronger predictor of trends we might expect in late winter this year than the arrival of a new variant strain. Other variants, including the beta and gamma variants, were unable to get much traction in this country in the face of the delta strain and rising population immunity.

What should we do now?

The approach to this holiday season and beyond has not changed. The presence of a potentially more transmissible strain should strengthen our resolve to continue promoting vaccination of adults and children who have not yet received them. Reports of potentially increased impacts in younger children in South Africa hasten the need to review data on vaccine efficacy and safety for children under 5. Those who are eligible for booster doses of the vaccine should obtain them quickly, to maximize the concentration of neutralizing antibody response circulating in their systems, which to date have been effective against each newly detected variant. If omicron proves to be more tolerant to vaccine-induced neutralizing antibodies, vaccine producers are poised to update their vaccines.

While the news about omicron was unwelcome, it is not entirely unexpected and does not need to lead to mass hysteria. The propensity of SARS-CoV-2 to mutate over time has been a given, much like other seasonal respiratory viruses. As scientists gather more information, we would advise patience and resist the temptation to over-reach in response to news of each new variant. Regardless, the basic fundamentals of the pandemic have not changed, and we are still optimistic that rates of SARS-CoV-2 infections will decline after the holidays and beyond. If rates were to surge again because omicron proves to be more transmissible and able to escape immunity, we need only pivot back to time-limited recommendations for masking indoors during periods of resurgence.