As Election Day quickly approaches, our country is experiencing a resurgence of COVID-19 in every state except Hawaii, with nearly half of the country expected to see quickly accelerating growth, not just of cases but also of hospitalizations, over the next four weeks.

In early September, our team was contacted by national media interested in how a fall COVID-19 resurgence could influence the election. At that time, we had suspected that decreasing temperatures in the Upper Midwest and Northeast could lead to surging transmission in some states as voters went to the polls. This included Iowa, Michigan, Wisconsin, Ohio and Pennsylvania. We also projected that the situation in the South could be calmer on Election Day, following the summertime surges and because of a more temperate climate.

We now know that our predictions for the northern part of the U.S. were accurate. According to our updated projections this week, areas throughout Ohio, Michigan and Pennsylvania are rapidly worsening. In the Northeast, transmission rates are expected to increase over the next four weeks across New Hampshire, Massachusetts, Rhode Island, Connecticut and New Jersey. New York City continues to be the stalwart, growing more slowly than the rest, but it is adjacent to areas in Northern New Jersey experiencing rapid growth. Time will tell if the mitigation strategies of New York City can hold up to the surrounding burden of cases.

Above are the projections for Essex County in New Jersey.

Unfortunately, our projection that those in the South—including voters in North Carolina, Georgia, Florida and Nevada—might go to the polls with a much brighter outlook is proving not to hold. According to our updated forecasts this week, the fall resurgence of COVID-19 has reached these areas. 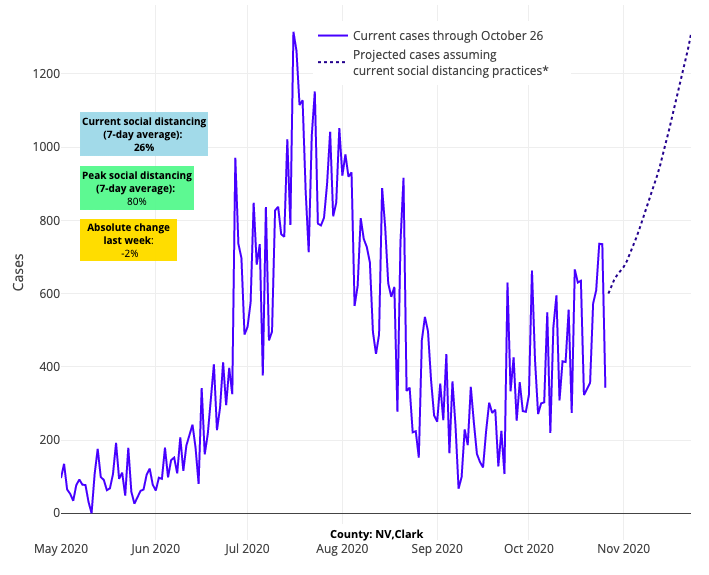 Above are the projections for Clark County (Las Vegas) in Nevada.

In other parts of the country the story is similar. Arizona’s forecasts are worsening by the week, from Flagstaff and now south into Phoenix. We also expect exponential case growth to continue throughout Colorado and New Mexico. Sadly, it is not just the lower 48 states; we also forecast Alaska to have substantial increasing transmission in the next four weeks. 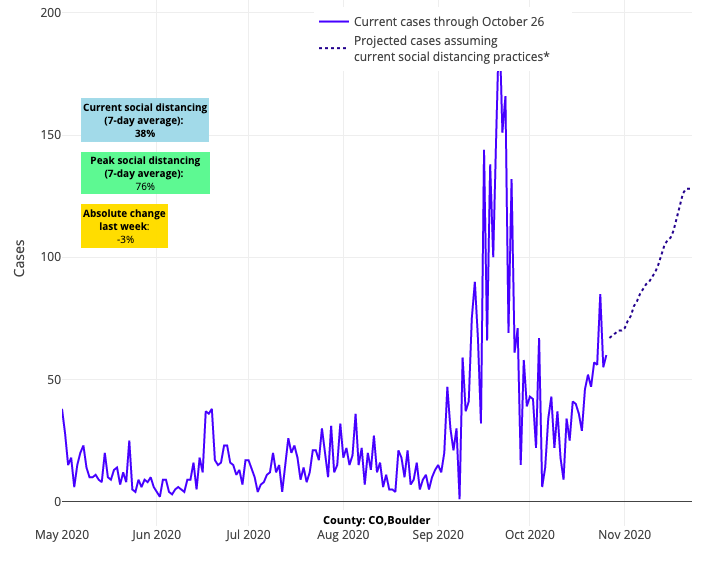 Above are the projections for Boulder County in Colorado.

In this current phase of the pandemic, the rate of growth is concerning. Some counties in the Upper Midwest are nearing or exceeding 1,000 cases/100,000 people weekly. Many have voiced that the current rise in cases is less concerning than what we experienced in the spring because we had not been seeing rising hospitalization rates. However, data from the U.S. Department of Health and Human Services (HHS) and Centers for Disease Control and Prevention (CDC) show COVID-related hospitalizations are now increasing, as are ICU admissions… and past experience tells us that these rates will not peak until weeks after we flatten the rising case curve.

As other states sustain rapid increases in case transmission and testing positivity rates, we fear that they will experience similar hospitalization burdens. Health care facilities have improved in their ability to support patients with COVID-19, which has likely led to a reduced death rate. However, if hospitals are overburdened by patients with COVID-19, the care of all hospitalized patients will suffer.

All told, it is uncertain how the resurgence we are seeing will influence the election itself. Over the last week, our team has surveyed states’ approaches to ensuring safe voting practices. We are happy to report that many states have recognized the importance of pandemic proofing their voting protocols. Notably, states such as Arizona and Wisconsin have changed their voting procedures in response to the pandemic. Unfortunately, some states—Texas, Louisiana, Mississippi, Tennessee, Indiana—do not offer mail-in ballots for citizens concerned about exposure to COVID-19. This represents an estimated 34 million voters that will need to vote in-person. We encourage the polling locations within these states to commit to supporting strong safety practices so that their constituents can feel safe in exercising their right to vote.

On Election Day, voters and polling locations should embrace multi-layered safety protocols, much like the ones we have developed for school operations alongside our school partners. The guidelines almost universally include:

Importantly, many polling locations will be housed in schools; ensuring that these safety protocols are employed will serve to protect students that may be returning to school the next day.

That leads us to subject of in-person schooling. As the incidence of COVID-19 rises in many parts of the country, and rapidly in many locations, we find ourselves grappling with the challenging question of when to revert to virtual learning. We must emphasize that there is no clear answer on exactly when to revert to distance learning. We have been encouraged by the compelling evidence in recent weeks that strong school safety protocols can thwart linked in-school transmissions. In the rare scenarios in which in-school transmission has happened, swift action has contained these events to small clusters. Furthermore, we continue to hypothesize that having kids at school under the umbrella of these safety protocols may be safer. As such, a fair question remains: will closing schools due to rising case numbers help mitigate continued transmission or, instead, will it lead to the unintended effect of promoting additional transmission throughout the community as children gather outside of the supervision and structure afforded by schools?

While these are important points that support in-person schooling, we have always believed that an upper threshold of case numbers and test positivity exists at which school safety protocols and implementation of rigorous contact tracing cannot fully protect children, teachers and staff. We still do not know exactly what those thresholds are, or if they are the same for every locality, but some locations may have or may soon hit a tipping point when the numbers of individuals infected in the community is so great that even the best of school mitigation plans cannot stop transmission in schools.

This has led some school districts to be more cautious as we get later into fall. Boston this past week detected widespread transmission in their metropolitan area, and proactively closed their schools when their testing positivity rate surpassed 5.7%. School districts in Atlanta, Ga., Columbus, Ohio, and Madison, Wisc., surveyed their regional trends and then delayed planned reopenings for next month until the new year.

There are many variables to be considered in a decision to revert to virtual learning, which vary by county and even by school, making this a decision for local administrative leaders. The metrics that these leaders should consider include case positivity rate, incidence rate, current success with mitigation strategies, availability of staff and the continued reliability of contact tracing programs to keep pace with the growing number of cases.

In the Philadelphia region, some counties (Delaware and Philadelphia) are now exceeding weekly case counts of 100 per 100,000 people and approaching 9% testing positivity rates. This is a scenario in which we would encourage school districts to begin considering moving to their distance learning model. If a school system has strong mitigation protocols in place, they may be able to weather this increase for longer periods of time with in-person school, but likely they will begin to see in-school transmission, necessitating a move to distance learning.

Above is the 7-day average test positivity rate for Philadelphia County in Pennsylvania.

Other schools may have prepared for this moment and elect to selectively continue in-school learning for elementary age or special education students, for whom the risk of in-school learning may be lower. Others may suspend team competition among sports teams, pursuant to our recommendations. Still others may continue some extracurricular activities—with strict attention to safety protocols—even as their students revert to online education. There is no one-size-fits-all approach. Leaders of public school districts and independent schools should have consistent and close communication with their health departments to decide when to make the transition to virtual instruction plans. We need to trust the planning that schools have already put into place for virtual learning so that when the time comes for a given district or school, everyone is ready to make that transition.

As we enter the coming months, which include a national election and many holidays, our country is in a fragile state. Many people are understandably worried about the days and weeks ahead. At a time when it is easy to feel a loss of control over the situation, we would remind everyone that we do have access to simple, effective strategies to reduce transmission. Wearing masks and resisting the temptation to take part in medium to large gatherings that include people who are not members of your immediate family/small bubble are things we can and must do to protect ourselves and our loved ones.

We encourage all to be safe out there, and to get out and vote safely, if you have not done so already. We will be back next week and will wade deeper into the management of this next wave of the pandemic, when America tries to regain its balance.