COVID-19 Outlook: America Hangs in the Balance, but Early Evidence of Behavior Shifts

The tension between reopening and resurgence of COVID-19 is playing out again this week in PolicyLab’s modeling update.

The most concerning areas for additional widespread community transmission continue to be in Texas, Arizona, the Carolinas and, once again, Florida. In fact, Florida has all the makings of the next large epicenter…the risk there is the worst it has ever been in our projections. Miami and Florida’s southeastern counties now join the Tampa/Fort Myers area and Orlando for a fairly widespread transmission event that we forecast will continue throughout the state.

Alabama is flaring back up, and we’re detecting new risk in Louisiana, particularly in the neighboring parishes to New Orleans, which should be concerning to the Big Easy. 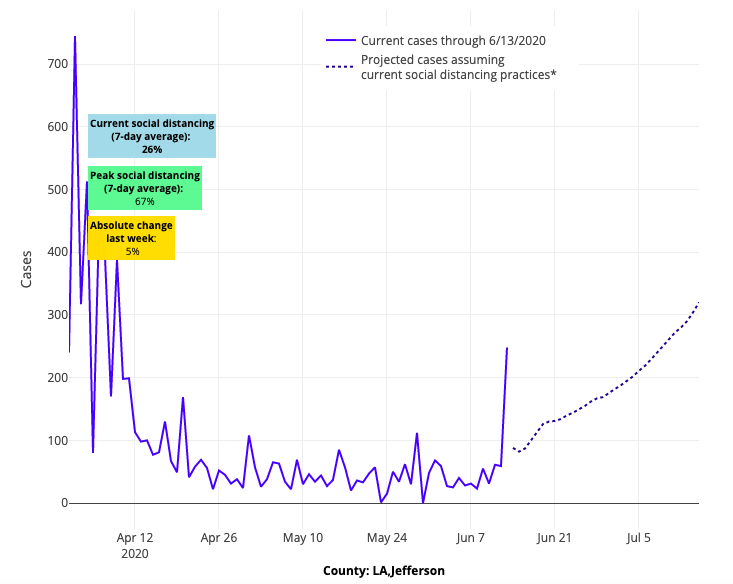 Above are the projections for Jefferson County in Louisiana. 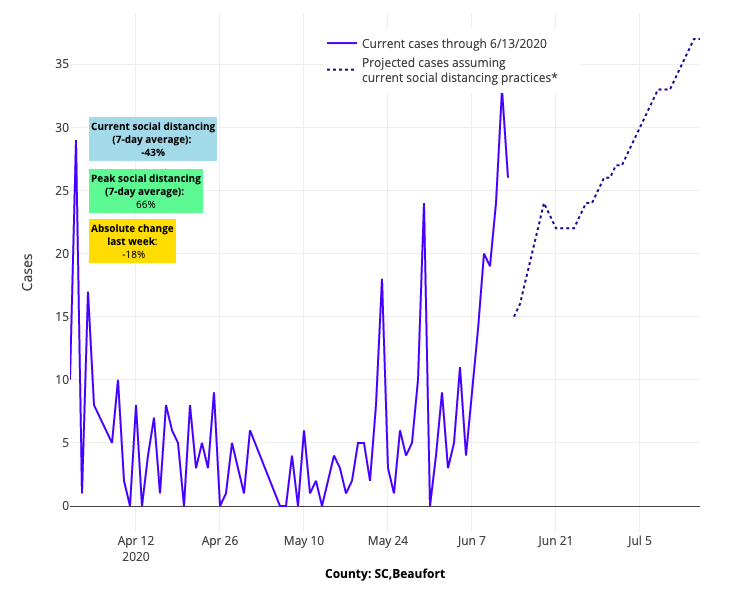 Above are the projections for Beaufort County in South Carolina.

Meanwhile, we added 133 new counties this week to be more inclusive of less densely crowded or populated areas that are also experiencing significant outbreaks. In reviewing this new data, the most interesting finding was that they were mostly counties with meatpacking plant outbreaks. And it was staggering just how many outbreaks there have been—something we think is worthy of more reporting in the mainstream news. The addition of these new locations also helps us understand some of the converging risk in counties across the Carolinas, where relaxed social distancing blended with local outbreaks is threatening to spread transmission throughout the states.

On a bright note, though, we are now seeing some evidence of changing behavior, which may help to quell these outbreaks. From Nashville, to Houston, to Richmond, to Phoenix, to Salt Lake City, people have not continued to relax social distancing, which we measure as change in travel to non-essential businesses. How quickly that translates to flattening their risk curves will bear watching.

What’s been very interesting to us is that Atlanta, and most of Georgia, have been able to contain risk for additional widespread community transmission even while surrounded by states with hotspots. We have a lot to learn from the positive outlooks we’re projecting for Atlanta, Denver, Madison, Wis., St. Louis, Mo., and Columbus, Ohio. Understanding how they differ from others in the region with regards to their reopening plans is key to guiding our country forward. And to those northeastern and midwestern states that waited just a bit longer to reopen, hats off to you—your patience has been rewarded with continued declining case counts and favorable forecasts through late July. 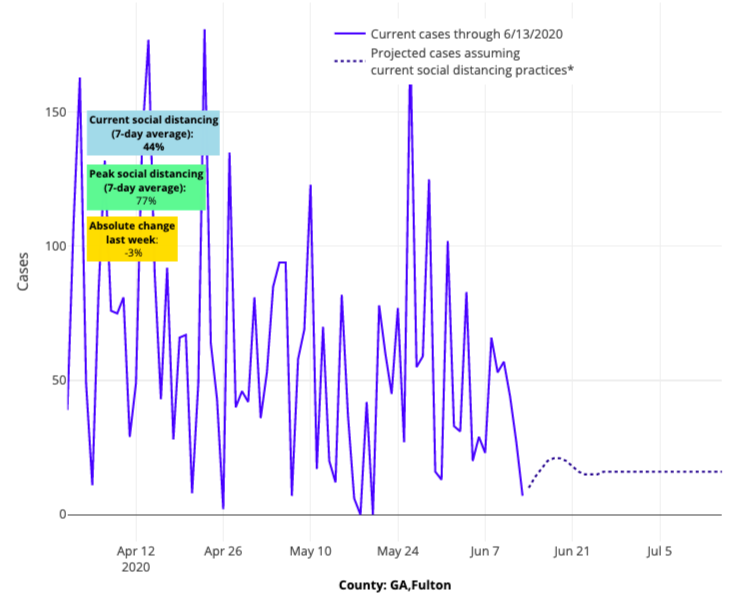 Finally, a story in the Daily Beast featuring our interpretation of impacts we are seeing in our data related to travel and highway corridors has generated a lot of interest this week. During the shelter-in-place phase of the epidemic, outbreaks were mostly confined to metropolitan areas. However, as states have reopened, we see risk aligning between adjacent metro areas, particularly as we follow our four-week forecasts week-to-week. Given that, we had observed significant impacts from increased travel and activity on Memorial Day weekend in locations that were already experiencing higher disease burden. For example, Galveston has felt the impacts of people traveling in from Houston to go to the beach. The forecasts we released today reveal that cases are also rapidly increasing along the popular South Carolina coast, and, as mentioned earlier, risk for resurgence has spread rapidly along the coastal I-95 corridor of Florida. On the West Coast, we had been following for several weeks the outbreaks in the Imperial and Inland Empire areas of southern California. Over the last two weeks, our forecasts have shown that that risk appears be spreading south to north along the I-5 corridor in the Central Valley.

While there are no empiric studies that can detect if travelers are seeding these outbreaks, the regional spread we have observed over time suggests a migration effect along commuting corridors. In California, our understanding is that nursing home outbreaks have grown quickly throughout the Central Valley. To some degree, insufficient protection of nursing homes has quickly intensified these outbreaks, but they were likely seeded by staff or family members who were exposed in their communities. To the degree that travelers and community members were not vigilant enough with masking in indoor locations, like grocery stores, the risk of exposure and spread likely increased.

Overall, Memorial Day weekend activities and increasing travel greatly impacted those areas that had moved too quickly to return to normal, and we are seeing compounding impacts in the South, Southeast and Southwest. But for those areas that had waited longer to reopen, or are reopening more slowly, they have moved through the holiday and the subsequent mass demonstrations for racial justice without a significant change in forecasts. A study out of Minnesota also revealed early data that the demonstrations seem to do little to increase overall case positivity there. We suspect that in most locations, the outdoor demonstrations did not add significant risk for COVID-19 spread.

So, what does this all mean? Ultimately, we hope that the early evidence of more vigilant behavior we’re observing in some hotspots signals that many people are now beginning to understand summer weather alone cannot extinguish an outbreak. High temperatures and humidity help to reduce coronavirus spread on the margins, but the greatest differentiator is our distancing and masking and hand hygiene, and the ability to protect high-risk locations like meatpacking plants, prisons and nursing homes.

What’s next for COVID-Lab? We are widening the scope of how we measure social distancing, and we are adding new features to the model to capture gathering events and traffic. Adding these will likely to improve our ability to understand the nature and future risk for continued widespread COVID-19 transmission.