As an adolescent HIV physician, sometimes the most difficult part of my job is not delivering a diagnosis, but helping my patients cope with the reality of a life-time of treatment. Take one of my most recent patients, a 16-year-old named Percy*, for example. Two weeks after his diagnosis, I found myself sitting with him in our HIV clinic as I read the results of his CD4 count and viral load, two measures of HIV health status, for the first time. While the numbers are important, what I wanted Percy to hear most that day was a message of hope. We have the tools to help him live a long, beautiful life in which he can achieve his dreams free from fears of disease progression and transmission.

One of those tools is antiretroviral therapy (ART), medication that if adhered to daily suppresses the HIV virus and halts progression of the disease. For Percy, one pill per day can lead to a healthy life and eliminate his transmission risk. Despite the safety and efficacy of ART in treating and preventing HIV, more than 60,000 youth in the United States live with HIV, and nearly half of those cases are undiagnosed. So, the epidemic continues, fueled by disparities in access to health care for adolescents and young adults that only stand to widen with shrinking or disappearing funding for the state and federal programs that treat and prevent HIV.

Youth and the HIV Care Continuum 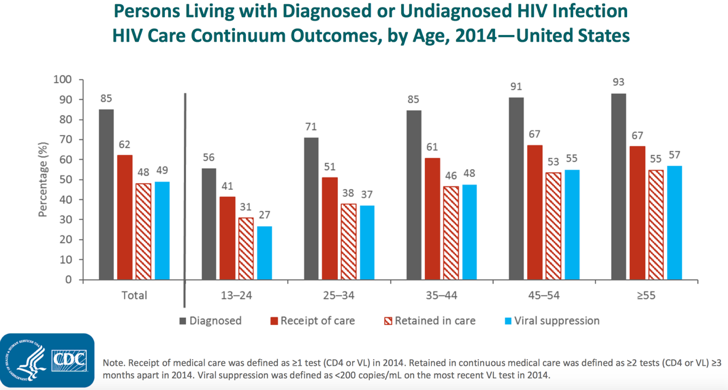 From a public health and policy perspective, we measure treatment benchmarks for HIV using a continuum of care. This care continuum encompasses the stages of HIV testing, receiving and maintaining HIV care, and viral load suppression, or when the virus is no longer detectable in the blood. Data released from the Centers for Disease Control and Prevention this year illustrate an ongoing stark reality along the care continuum: youth do worse than older adults at every stage. For example, while nearly half of the adults living with HIV in the U.S. have achieved a suppressed viral load, only 27 percent of adolescents and young adults have hit this benchmark. These lower success rates across the continuum translate into another grim health outcome: those youth who don’t achieve viral load suppression remain at risk of progression to acquired immune deficiency syndrome (AIDS).

Our findings highlight the importance of policies and programs that ensure youth have uninterrupted access to quality health care coverage, which includes coverage for programs that assist with viral load monitoring and medication adherence. These measures could go a long way to prevent episodes of treatment failure that may result in treatment resistance, disease progression, HIV transmission and AIDS diagnoses.

While HIV clinicians play a key role in initiating ART and monitoring treatment, our efforts will only be successful insofar as our patients continue to have access to care. Recent attempts to dismantle the Affordable Care Act (ACA) could interfere with this access. 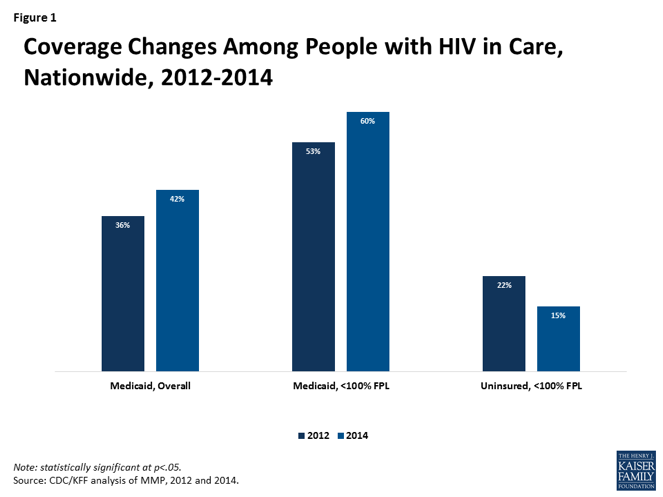 For people living with HIV, the ACA increased access to insurance by expanding Medicaid in key states, offering low-cost plans through the health insurance exchanges, and eliminating pre-existing condition exclusions. While attempts to repeal the ACA have failed thus far, the increased access to care that the ACA allowed for may still be compromised under a new set of proposals – including the White House’s plan to eliminate cost-sharing reductions to insurance companies, the executive order allowing increased access to poorly regulated association plans and short-term insurance, and a tax bill that could eliminate the individual mandate requiring people to obtain insurance – that could alter pieces of the health law that these youth rely on for quality care. These changes could also lead to sharp cost increases for people living with HIV who access insurance through the marketplace.

Furthermore, if threatened Medicaid funding cuts or dramatic changes to what Medicaid covers become reality, it could pose even greater harm to my patients considering the program covers more than 40 percent of people living with HIV.

Even with the safety net of the Ryan White HIV/AIDS Program, which provides access to HIV care and antiretroviral medication for hundreds of thousands of low-income people every year, cuts to Medicaid could be catastrophic to youth at risk for or living with HIV. If a substantial number of people living with HIV were to lose insurance coverage, the flat levels of funding currently allocated to Ryan White could be exhausted by the growing number of uninsured individuals.

As an adolescent HIV physician, writing the prescription for Percy’s antiretroviral medication will be the easy part. Especially on this World AIDS Day, the real challenge lies in working toward the goal of universal access to care for our most vulnerable patients. Without systems to ensure that every individual, particularly youth, living with HIV has uninterrupted access to care and ART, our grasp on ending the epidemic will be elusive.