Editors Note: PolicyLab’s communications team is interested in learning more about our blog readers and your thoughts on our content. We invite you to take this 5-minute survey to help us ensure our posts continue to be helpful and relevant to our readers. The survey will be open until May 1, 2019.


You may have seen the new TV commercials or full-page ads in major newspapers. After Altria, parent company to Phillip Morris USA and maker of Marlboro cigarettes, bought a 35 percent stake in JUUL, the company responsible for the most-popular vaping device among teens, JUUL launched a new ad campaign made for adults. The new campaign encourages adult smokers to “Make the Switch,” as JUUL was designed with smokers in mind.

This is just the latest effort by JUUL to try to convince policymakers, health professionals and anti-smoking advocates that their product is for adults, rather than for the millions of teens across the country who have become addicted to the tobacco device. And yet, new research from Stanford University has confirmed what many have accused the company of doing for years: JUUL intentionally targeted and marketed their products to teens.

A History of Marketing to Youth

The Stanford researchers analyzed JUUL’s advertising from June 2015 to November 2018, reviewing content from its website, social media channels (Instagram, Facebook and Twitter), hashtags and emails to customers. Their report identified that JUUL’s marketing launch in 2015 was “patently youth oriented,” and “their repeated assertion that their product is meant for ‘adult smokers only’ has not been congruent with its marketing practices over its first 3 years.” 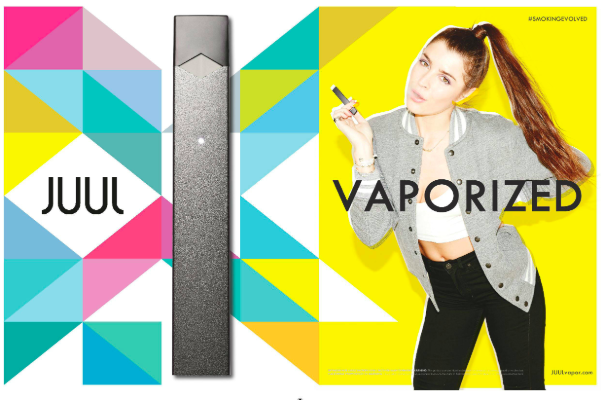 JUUL’s initial “Vaporized” launch campaign—with just one example shown here on the right—was very clearly designed and shared onchannels with younger customers in mind. According to extensive research into JUUL’s past marketing efforts, the researchers outlined a variety of the company’s strategies to capture that audience, including a social media and YouTube presence, working with and paying “influencers” to help promote the product and depicting youthful models in colorful ads more reminiscent of the latest tech product than a tobacco delivery system—and free of any mention or warnings regarding the nicotine content. In a telling change of strategy, and amid pressure from outside forces, JUUL has since eliminated their presence on Instagram and Facebook, and has incorporated into the recent “Switch” campaign more traditional mediums like radio and newspapers that typically reach an older audience.

JUUL also promoted sweet and fruity flavors popular with teens via media channels and advertising strategies used successfully by tobacco companies in the past, including Phillip Morris, to market conventional tobacco products to youth. Many of JUUL’s marketing approaches—including TV ads—are illegal for conventional cigarettes precisely because such tactics promote youth initiation and progression to ongoing use. Since the 1970s, tobacco companies have been restricted from most TV or print advertising. These same standards have not yet been applied to e-cigarettes—a key regulatory gap.

These marketing efforts from JUUL and Altria come amid public health concerns about the dramatic rise of adolescent vaping and associated health harms, and pressure on the Food and Drug Administration (FDA) to use their full regulatory authority over e-cigarettes. I wrote about these issues in January and even since then, there has been what seems like weekly, sometimes daily developments around e-cigarettes. Just last month, the FDA released a policy proposal* to limit the sale of flavored e-cigarettes that are so popular with teens. While this is a step in the right directly, much more needs to be done.

And now, JUUL is attempting to take another approach to convince us that their product is for adults: they’re trying to get health insurers and employers on board—and looking to recruit more new customers. However, evidence does not support recommending e-cigarettes as a first-line treatment for smoking cessation, and physicians and health care systems should be leery of any effort that is outside the current evidence base. For established adult smokers, e-cigarettes may be safer than traditional combustible cigarettes. E-cigarettes, however, are not FDA-approved for smoking cessation, precisely because there is limited evidence to support their efficacy. Meanwhile, there are multiple behavioral and FDA-approved interventions, such as Nicotine Replacement Therapy (NRT), that have been proven effective in helping smokers quit.

Regardless of JUUL’s new marketing campaign and strategies, their past efforts contributed to the dramatic rise in teen e-cigarette use over the last three years. More than 20 percent of high schoolers—that’s more than 3 million students—report current e-cigarette use. The most-common product used among teenagers and young adults? JUUL—which now controls an estimated 75 percent of the total e-cigarette market in the U.S. JUUL, through its partnership with Phillip Morris, is now an official tobacco company. Neither group can be looked upon to help solve the youth e-cigarette epidemic.

Public health organizations, including the American Academy of Pediatrics (AAP), must continue to emphasize the critical need for e-cigarette regulation, legislative action and counter promotion to protect youth from the public health harm from e-cigarette use. The FDA should ban advertising practices and the sale of flavored products, both of which have been shown to promote adolescent experimentation and addiction. The public health problem that e-cigarettes may address—helping adult smokers transition away from traditional tobacco products—can be investigated without targeting teens and further contributing to the new health crisis e-cigarettes have created.