COVID-19 Outlook: The Labor Day Effects Have Begun, Colleges are Leading the Way

It was already becoming apparent last week that Labor Day would have its own unique effects on COVID-19 transmission that were different than the resurgence we saw following the Memorial Day and July Fourth holidays. Rather than playing out over a long weekend, we’re seeing the movement of students back to college, and in some areas the simultaneous reopening of K-12 schools, confer accelerated risk well before the holiday itself and in much more varied areas of the country than vacation destinations had during the summer.

College towns are squarely in the spotlight, and last week we noted significant resurgence risk in the areas surrounding the University of North Carolina, University of Notre Dame and East Carolina University, among others. This was against a backdrop of many universities creating policies to restrict fraternities, sororities, and off-campus gatherings that are already spurring outbreaks on campus. Meanwhile, high schools throughout the South were facing challenging decisions revert to online learning, as increases in transmission rates and outbreaks were clearly originating from schools.

Now, with Labor Day weekend just two days away, we suspect that the level of case incidence and vigilance of both the schools and local residents to following safety protocols such as masking and distancing will define who will enter this next phase unscathed.

Already, many areas are in trouble. When we survey the map and our forecasts this week, it is clear that we have taken a step back in most areas. Seeing national case counts decline below 40,000 cases a day, it would be easy to suggest we are improving as a country. But, the truth is that improvements in California and Florida are masking worsening situations for many areas of the South, Midwest and Heartland, largely shaped by colleges that, despite their best mitigation efforts, have seen significant outbreaks. 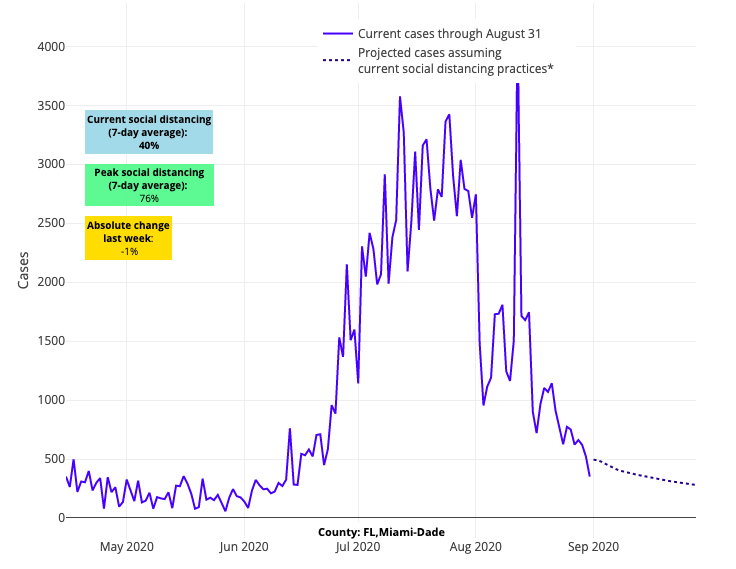 There are exceptions, like the University of Colorado, University of Michigan, and University of Vermont, but what defines those successes is lower case incidence at opening combined with strong safety plans. Purdue University (in Tippecanoe County, Ind.) also stands out as doing well, which could be reflective of their commitment to the “Purdue Pledge” that gained attention in advance of colleges opening. 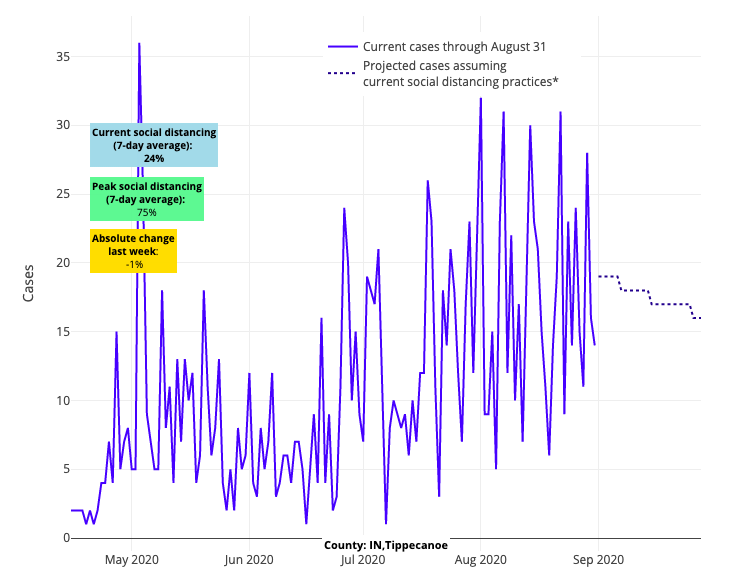 Above are the projections for Tippecanoe County in Indiana. 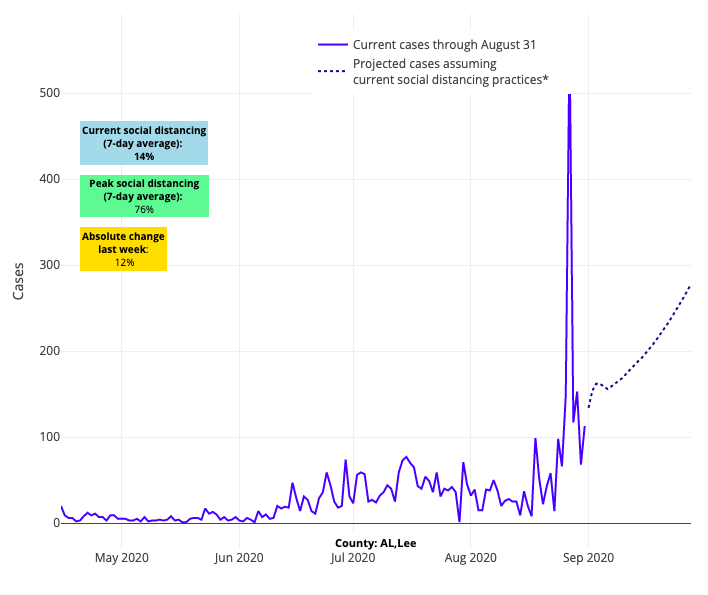 Above are the projections for Lee County in Alabama.

We wish to stress, though, that the goal should be to contain outbreaks on campus; dispersing students back home in the midst of an outbreak only makes things worse. Strong crisis plans that safely quarantine students on campus and pivot to online learning can prevent further spread into college towns. So while the quick escalation of transmission was to be expected at the start of the year, the question now becomes can colleges prevent the spread to their surrounding communities?

Proactively, public awareness campaigns, collective commitment pledges (such as the one at Purdue), and strong restrictions on gatherings for sports, Greek life, and other activities can go a long way to preventing outbreaks in the first place and protecting the communities that surround these institutions. It remains to be seen which proactive and reactive mitigation plans will be most effective in reducing the risk of virus resurgence stemming from college campuses, but it is something we plan to monitor in the weeks ahead. At least for this week, we send our regards to the Fighting Irish, who, following some bad press about a resurgence in South Bend, are working hard to extinguish that epidemic and prevent further harm. Their testing positivity rates are already down, validating a reinforced commitment to strong mitigation plans they developed before students returned to campus. 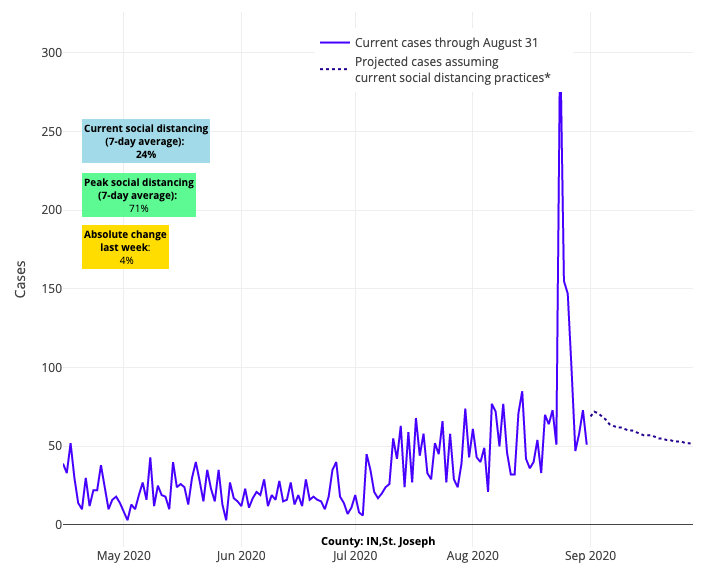 Above are the projections for St. Joseph County in Indiana.

Moving on, unfortunately, the concerns we reported about last week when it comes to testing and data validity seem to have only worsened. Texas’ data remains totally unreliable and their dashboards are misleading the public. While our data shows very high positivity rates across many Texan counties, they have reported declining case counts… it just doesn’t add up. We’re seeing this same data mismatch now in Mississippi and Wisconsin. There is no reason to suspect that the Milwaukee and Kenosha areas are any different than Chicago, yet their case incidence data would tell you they have rapidly improved while their high testing positivity rates tell another story. It is possible that recent unrest there contributed to limited access to testing. 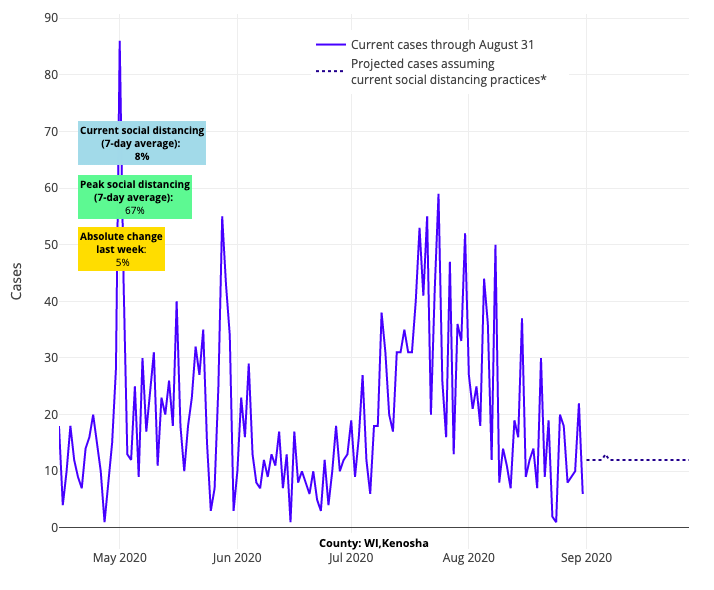 Above are the projections for Kenosha in Wisconsin.

As far as improvements in our projections, we foresee some relative stabilization of the Northeast, and some modest improvements in Maryland. New York continues to be rock solid stable, and New Jersey seems to be following suit this week. Our four-week forecasts for Boston and Rhode Island are relatively unchanged, if not slightly improved. But we did note some increasing incidence around Hartford, Conn., which will bear close watching in the weeks to come. And our projections for most counties across Virginia and southeastern Pennsylvania remain the same from last week, not improving, but not worsening either. 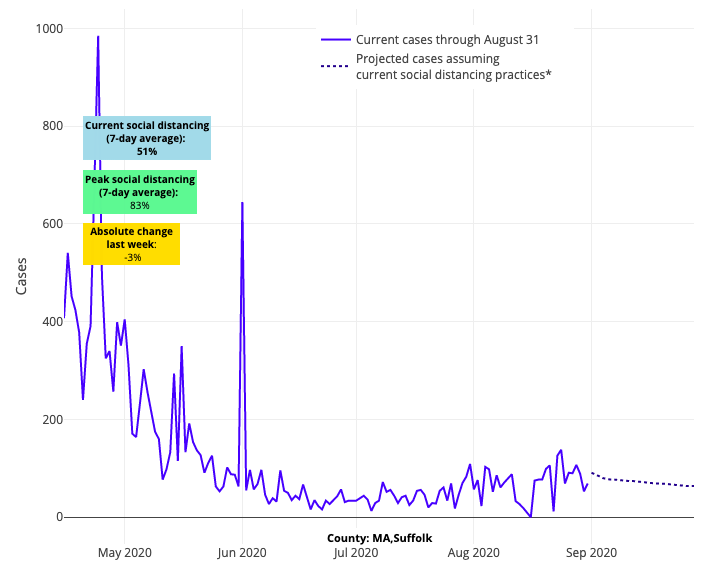 Above are the projections for Suffolk County in Massachusetts.

All told, there are now a number of areas in the Northeast and Pacific Northwest that have put themselves into position for successful school reopenings, particularly for children who may have more difficulty learning virtually, such as those with special needs or elementary-age students. Michigan and Colorado stand out as well. We should note and celebrate their relative success.

So, what are we to make of all these trends as we enter the holiday weekend? For us, the parameters are becoming set for the fall. As communities and colleges across the U.S. experience outbreaks during these warmer months, we worry that people will underestimate the impact of outbreaks that occur in colder temperatures when the risk that COVID-19 transmission and severity of disease will worsen. Informed by our own research, our concern remains, particularly for our northern and midwestern cities, that respiratory transmission is likely to pick up as we head into the fall. The result may not only be increasing case counts, but higher inoculums, and therefore disease severity, for those who are exposed.

If we can move past the summer and commit with vigilance to masking in public locations and reducing our gathering sizes, we can move through this next phase well. We’re also watching those states and localities that are trying in earnest to enforce individual or business-based mask mandates to see what strategies work best. Our colleague, Caroline La Rochelle, wrote an excellent blog post this week highlighting examples from across the country. But for those communities who become complacent with masking enforcement or other recommended safety protocols, they should not be surprised if the pace of outbreaks and hospitalizations changes once again as the weather changes. Northern Italy, New York, and the meatpacking outbreaks were not a mirage; they are a reminder of how colder conditions may accelerate more severe disease if we let our guard down.