Alina Schnake-Mahl, ScD, MPH, is an assistant research professor in the Department of Health Management and Policy and Policy Core co-lead at the Urban Health Collaborative at the Drexel Dornsife School of Public Health.

Rebecca Finkel, MPH, is the communications manager at the Urban Health Collaborative at the Drexel Dornsife School of Public Health.

As we enter our third pandemic winter armed with boosters that are effective against the currently circulating variant, only 16% of working-age people have received these vaccines. The Biden administration’s newly released COVID-19 Winter Preparedness Plan urges state governments, health care providers, and businesses to expand awareness and availability of COVID-19 vaccines, but this plan misses a crucial link between intention and action: ensuring that people can afford to take time off from work to get vaccinated and recover from possible vaccine side effects. In other words, paid sick leave.

Paid sick leave is especially important for working parents and caregivers. It allows them to take time off to care for themselves or their children without losing wages. Recent studies have shown that access to this benefit can curb rates of respiratory illness and COVID-19 and increase the likelihood that working people will get a flu shot. New research from our team at Drexel’s Urban Health Collaborative found that cities with paid sick leave policies had higher rates of COVID-19 vaccination coverage among working-age people compared to cities without these policies. Importantly, this relationship was strongest in urban neighborhoods that rank higher on the Centers for Disease Control and Prevention’s (CDC) Social Vulnerability Index (SVI), a tool that estimates how a neighborhood would fare in an emergency (such as an outbreak of infectious disease) based on variables that include income and education, number of children in a household and single parent status. 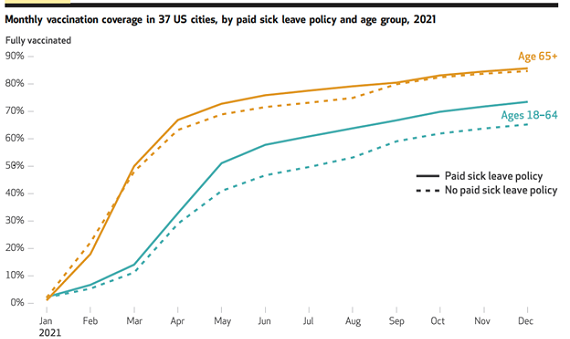 Our research demonstrated that paid sick leave policies can be a key tool to support vaccine equity by increasing vaccination coverage in the most socially vulnerable communities. By increasing vaccination coverage, paid sick leave policies can provide much-needed protection against respiratory viruses, reducing both the spread of disease and the risk of severe outcomes in an already vulnerable population.

Paid sick leave recently rose to national attention this fall when rail workers threatened to strike, but there is another, larger group that regularly lacks access to this benefit: women. Because the U.S. has no federal paid sick leave policies—an anomaly among wealthy countries—there is a significant gender gap among eligible workers. In the U.S., women are more likely to work part time, earn lower wages and work in service industries that don’t tend to offer paid sick leave, such as retail apparel. But recent research shows that this gender gap is eliminated in states and cities with paid sick leave laws.

Women also have higher rates of presenteeism or working while sick. Presenteeism is a known spreader of respiratory viruses, and those most likely to go to work while sick are low-income mothers. This can happen for two reasons: 1) Having children increases a parent’s risk of getting sick, and 2) women who earn low incomes or work part time often can’t risk losing wages—or their job. According to a 2017 Kaiser Women’s Health Survey, more than half of U.S. women who miss work to care for their sick children don’t get paid. Pressure to work while sick is increased in women of color, who are more likely to be family breadwinners or to be employed at a job that doesn’t offer paid sick leave.

A Universal Approach that Targets Those Most in Need

It’s easy to see how presenteeism creates a perfect storm for spreading respiratory viruses through workplaces and schools. But what might be less visible is its toll on families. Not only are children with health problems in low-income families less likely to have a parent with paid sick leave, parents without paid sick leave are less likely to miss work to care for their children. Many of these children, as well as their caregivers, have asthma, often brought on by a constellation of social and environmental hazards commonly found in neighborhoods with high social vulnerability. These children are in particular need of protection against respiratory viruses, which can trigger the severe illness and life-threatening asthma attacks currently overwhelming pediatric hospitals.

This population of families is reflected in our study, in the people who live in the neighborhoods that experienced the greatest benefits from paid sick leave. Our research demonstrates that some universal approaches to policy—ideally at the federal level—can target those who need it most. In this case, paid sick leave mandates enhanced vaccination coverage in neighborhoods with the highest need. With an RSV vaccine just around the corner, it is well worth exploring whether paid sick leave policies can extend these protections to children, as well.